A 1992 flyer featuring the Tenderloin Housing Clinic advocates for voter support of Proposition H, which would eliminate the annual 4% rent increase floor. 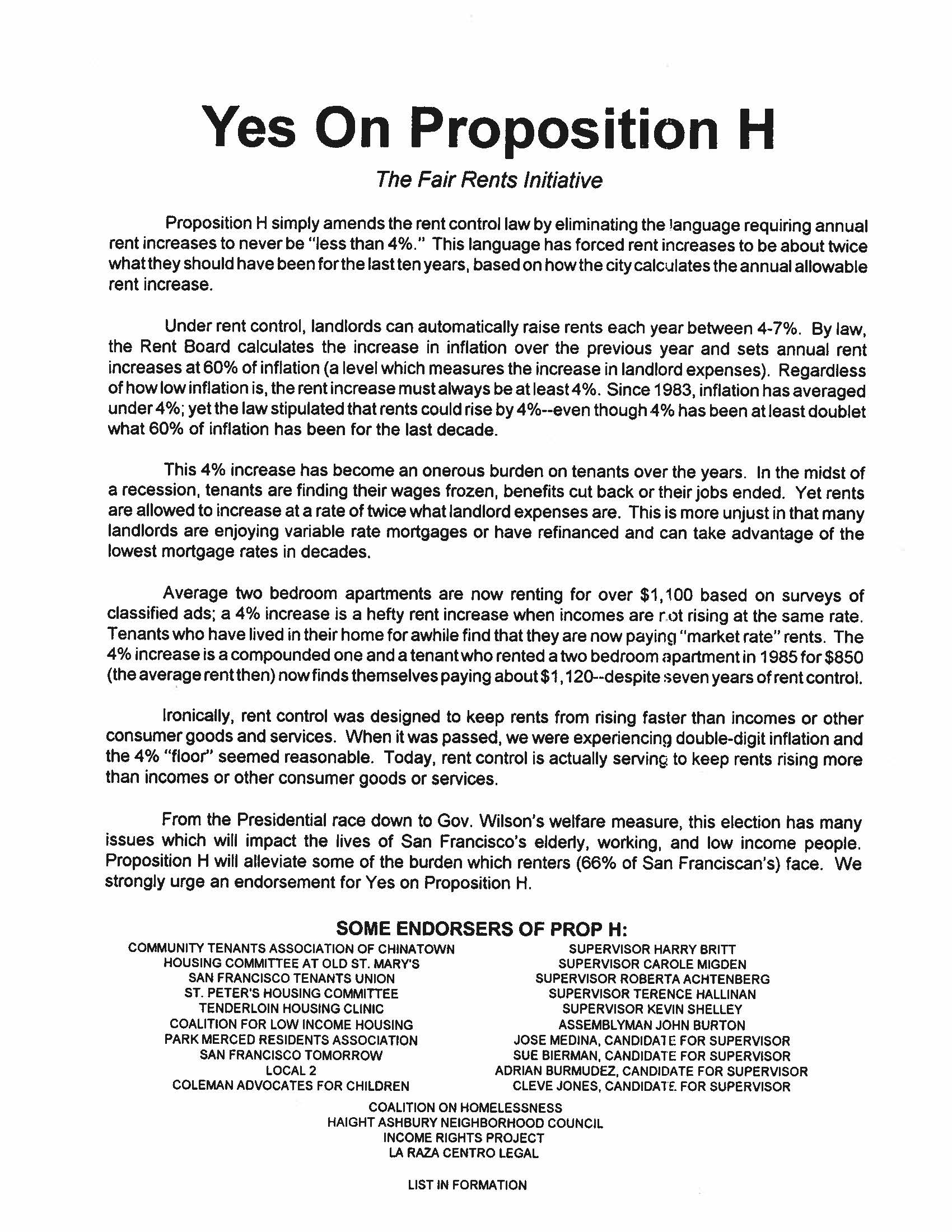 Proposition H simply amends the rent control law by eliminating the language requiring annual rent increases to never be “less than 4%.” This language has forced rent increases to be about twice what they should have been for the last ten years, based on how the city calculates the annual allowable rent increase.

Under rent control, landlords can automatically raise rents each year between 4-7%. By law, the Rent Board calculates the increase in inflation over the previous year and sets annual rent increases at 60% of inflation (a level which measures the increase in landlord expenses). Regardless of how low inflation is, the rent increase must always be at least 4%. Since 1983, inflation has averaged under 4%; yet the law stipulated that rents could rise by 4%–even though 4% has been at least doublet what 60% of inflation has been for the last decade.

This 4% increase has become an onerous burden on tenants over the years. In the midst of a recession, tenants are finding their wages frozen, benefits cut back or their jobs ended. Yet rents are allowed to increase at a rate of twice what landlord expenses are. This is more unjust in that many landlords are enjoying variable rate mortgages or have refinanced and can take advantage of the lowest mortgage rates in decades.

Average two bedroom apartments are now renting for over $1,100 based on surveys of classified ads; a 4% increase is a hefty rent increase when incomes are not rising at the same rate. Tenants who have lived in their home for awhile find that they are now paying “market rate” rents. The 4% increase is a compounded one and a tenant who rented a two bedroom apartment in 1985 for $850 (the average rent then) now finds themselves paying about $1,120–despite seven years of rent control.

Ironically, rent control was designed to keep rents from rising faster than incomes or other consumer goods and services. When it was passed, we were experiencing double-digit inflation and the 4% “floor” seemed reasonable. Today, rent control is actually serving to keep rents rising more than incomes or other consumer goods or services.

From the Presidential race down to Gov. Wilson’s welfare measure, this election has many issues which will impact the lives of San Francisco’s elderly, working, and low income people. Proposition H will alleviate some of the burden which renters (66% of San Franciscan’s) face. We strongly urge an endorsement for Yes on Proposition H.

Some Endorsers of Prop H: