Mayor Brown vowed to break the legislative obstacles to stronger rent control, but after the election Brown its clear this was not his intention. 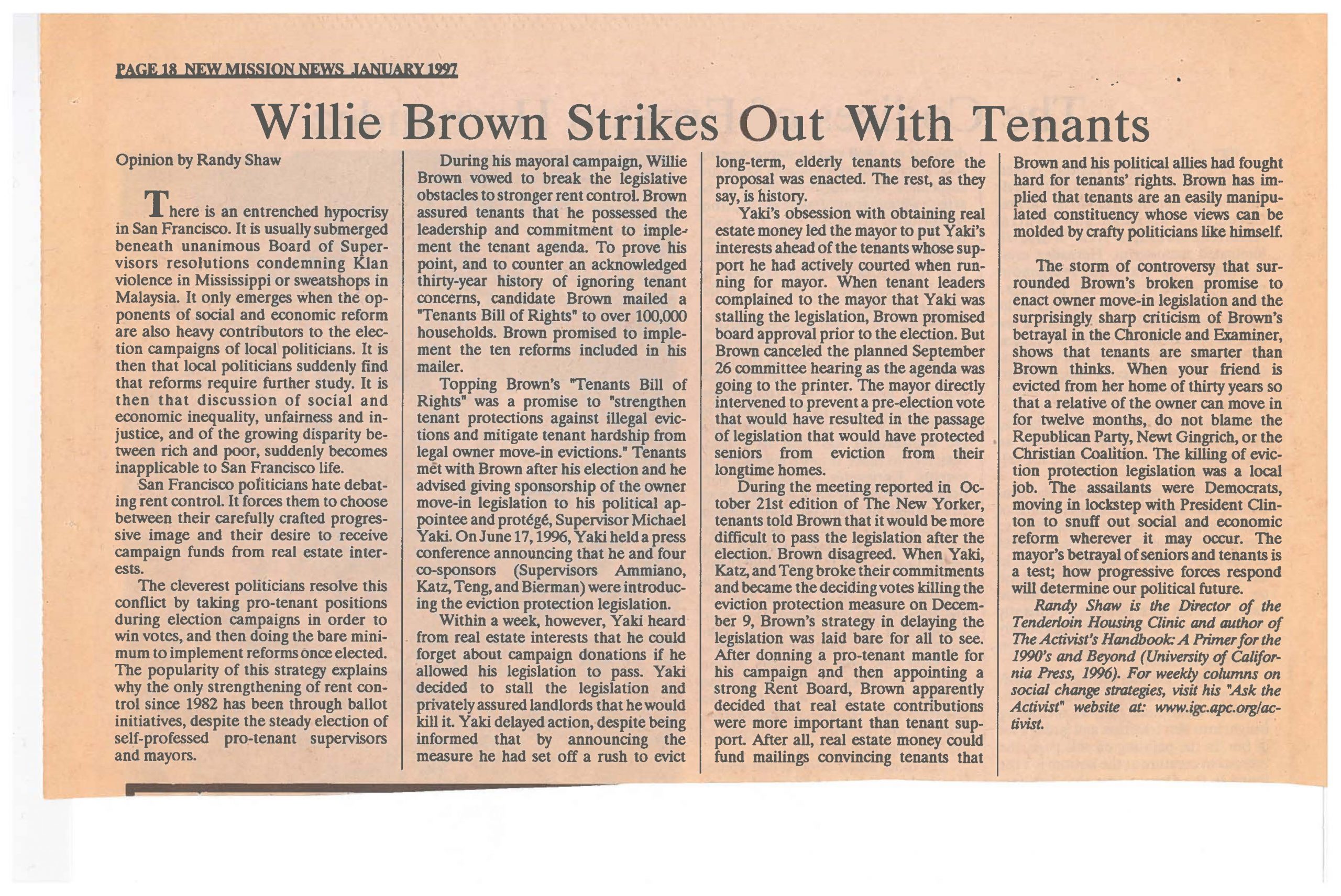 Willie Brown Strikes Out With Tenants

There is an entrenched hypocrisy in San Francisco. It is usually submerged beneath unanimous Board of Supervisors resolutions condemning Klan violence in Mississippi or sweatshops in Malaysia. It only emerges when the opponents of social and economic reform are also heavy contributors to the election campaigns of local politicians. It is then that local politicians suddenly find that reforms require further study. It is then that discussion of social and economic inequality, unfairness and injustice, and of the growing disparity between rich and poor, suddenly becomes inapplicable to San Francisco life.

San Francisco politicians hate debating rent control. It forces them to choose between their carefully crafted progressive image and their desire to receive campaign funds from real estate interests.

The cleverest politicians resolve this conflict by taking pro-tenant positions during election campaigns in order to win votes, and then doing the bare minimum to implement reforms once elected. The popularity of this strategy explains why the only strengthening of rent control since 1982 has been through ballot initiatives, despite the steady election of self-professed pro-tenant supervisors and mayors.

During his mayoral campaign, Willie Brown vowed to break the legislative obstacles to stronger rent control. Brown assured tenants that he possessed the leadership and commitment to implement the tenant agenda. To prove his point, and to counter an acknowledged thirty-year history of ignoring tenant concerns, candidate Brown mailed a “Tenants Bill of Rights to over 100,000 households. Brown promised to implement the ten reforms included in his mailer.

Topping Brown’s “Tenants Bill of Rights” was a promise to “strengthen tenant protections against illegal evictions and mitigate tenant hardship from legal owner move-in evictions.” Tenants met with Brown after his election and he advised giving sponsorship of the owner move-in legislation to his political appointee and protégé, Supervisor Michael Yaki. On June 17, 1996, Yaki held a press conference announcing that he and four co-sponsors (Supervisors Ammiano, Katz, Teng, and Bierman) were introducing the eviction protection legislation.

Within a week, however, Yaki heard from real estate interests that he could forget about campaign donations if he allowed his legislation to pass. Yaki decided to stall the legislation and privately assured landlords that he would kill it. Yaki delayed action, despite being informed that by announcing the measure he had set off a rush to evict long-term, elderly tenants before the proposal was enacted. The rest, as they say, is history.

Yaki’s obsession with obtaining real estate money led the mayor to put Yaki’s interests ahead of the tenants whose support he had actively courted when running for mayor. When tenant leaders complained to the mayor that Yaki was stalling the legislation, Brown promised board approval prior to the election. But Brown canceled the planned September 26 committee hearing as the agenda was going to the printer. The mayor directly intervened to prevent a pre-election vote that would have resulted in the passage of legislation that would have protected seniors from eviction from their longtime homes.

During the meeting reported in October 21st edition of The New Yorker, tenants told Brown that it would be more difficult to pass the legislation after the election. Brown disagreed. When Yaki, Katz, and Teng broke their commitments and became the deciding votes killing the eviction protection measure on December 9, Brown’s strategy in delaying the legislation was laid bare for all to see. After donning a pro-tenant mantle for his campaign and then appointing a strong Rent Board, Brown apparently decided that real estate contributions were more important than tenant support. After all, real estate money could fund mailings convincing tenants that Brown and his political allies had fought hard for tenants’ rights. Brown has implied that tenants are an easily manipulated constituency whose views can be molded by crafty politicians like himself.

The storm of controversy that surrounded Brown’s broken promise to enact owner move-in legislation and the surprisingly sharp criticism of Brown’s betrayal in the Chronicle and Examiner, shows that tenants are smarter than Brown thinks. When your friend is evicted from her home of thirty years so that a relative of the owner can move in for twelve months, do not blame the Republican Party, Newt Gingrich, or the Christian Coalition. The killing of eviction protection legislation was a local job. The assailants were Democrats, moving in lockstep with President Clinton to snuff out social and economic reform wherever it may occur. The mayor’s betrayal of seniors and tenants is a test; how progressive forces respond will determine our political future.

Randy Shaw is the Director of the Tenderloin Housing Clinic and author of The Activist’s Handbook: A Primer for the 1990’s and Beyond (University of California Press, 1996). For weekly columns on social change strategies, visit his “Ask the Activist” website at: www.igc.apc.org/activist