BBI rules that anti-conversion laws will be overlooked if residents cannot prove they resided for at least 30 consecutive days. 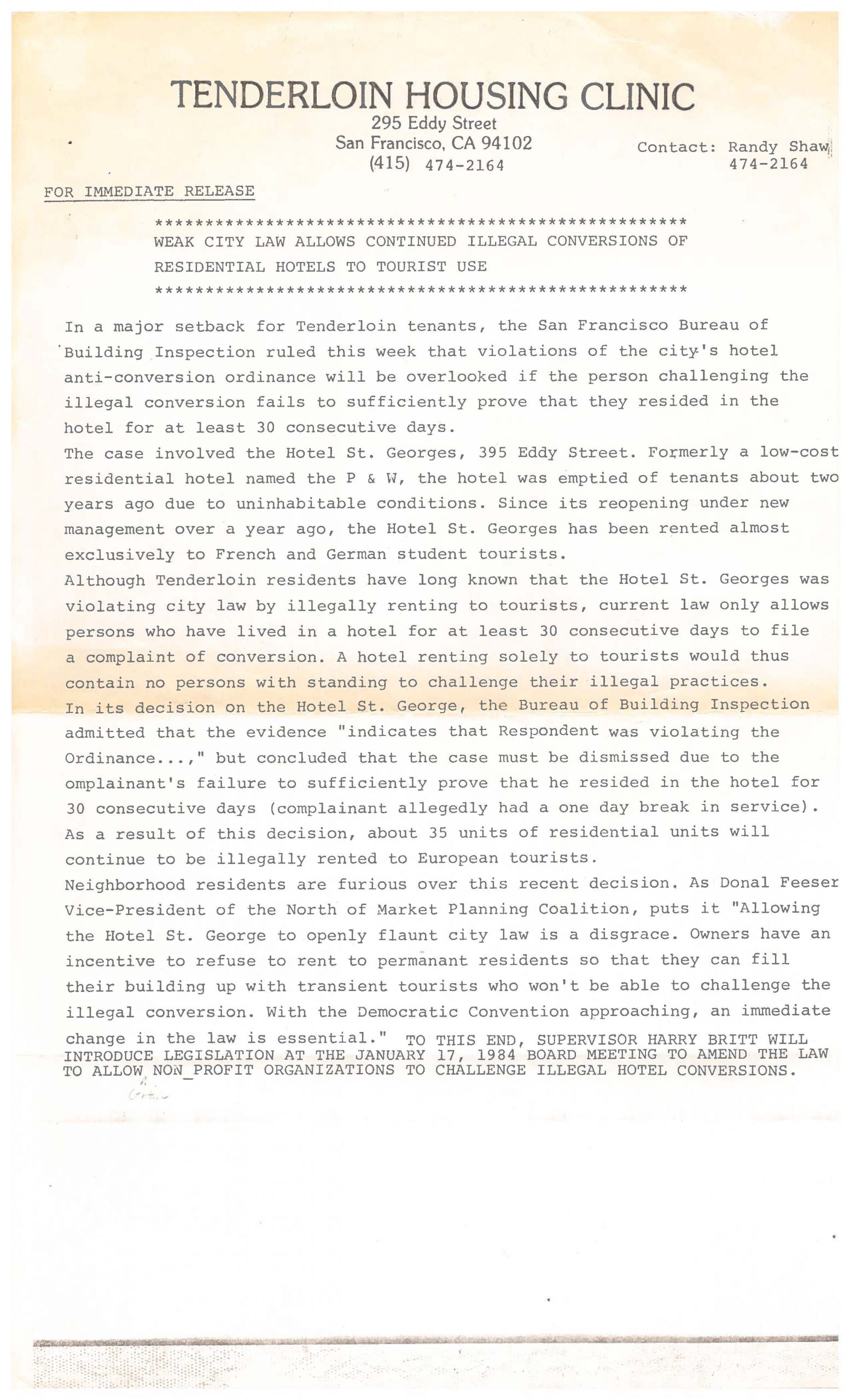 In a major setback for Tenderloin tenants, the San Francisco Bureau of Building Inspection ruled this week that violations of the city’s hotel anti-conversion ordinance will be overlooked if the person challenging the illegal conversion fails to sufficiently prove that they resided in the hotel for at least 30 consecutive days. The case involved the Hotel St. Georges, 395 Eddy Street. Formerly a low-cost residential hotel named the P & W, the hotel was emptied of tenants about two years ago due to uninhabitable conditions. Since its reopening under new management over a year ago, the Hotel St. Georges has been rented almost exclusively to French and German student tourists. Although Tenderloin residents have long known that the Hotel St. Georges was violating city law by illegally renting to tourists, current law only allows persons who have lived in a hotel for at least 30 consecutive days to file a complaint of conversion. A hotel renting solely to tourists would thus contain no persons with standing to challenge their illegal practices. In its decision on the Hotel St. George, the Bureau of Building Inspection admitted that the evidence “indicates that Respondent was violating the Ordinance…,” but concluded that the case must be dismissed due to the complainant’s failure to sufficiently prove that he resided in the hotel for 30 consecutive days (complainant allegedly had a one day break in service). As a result of this decision, about 35 units of residential units will continue to be illegally rented to European tourists. Neighborhood residents are furious over this recent decision, As Donal Feeser Vice-President of the North of Market Planning Coalition, puts it “Allowing the Hotel St. George to openly flaunt city law is a disgrace. Owners have an incentive to refuse to rent to permanent residents so that they can fill their building up with transient tourists who won’t be able to challenge the illegal conversion. With the Democratic Convention approaching, an immediate change in the law is essential.” TO THIS END, SUPERVISOR HARRY BRITT WILL INTRODUCE LEGISLATION AT THE JANUARY 17, 1984′ BOARD MEETING TO AMEND THE LAW TO ALLOW NON PROFIT ORGANIZATIONS TO CHALLENGE ILLEGAL HOTEL CONVERSIONS.