Issues over the Ellis Act and how it can be used – THC argues that housing is housing regardless of the act being invoked. 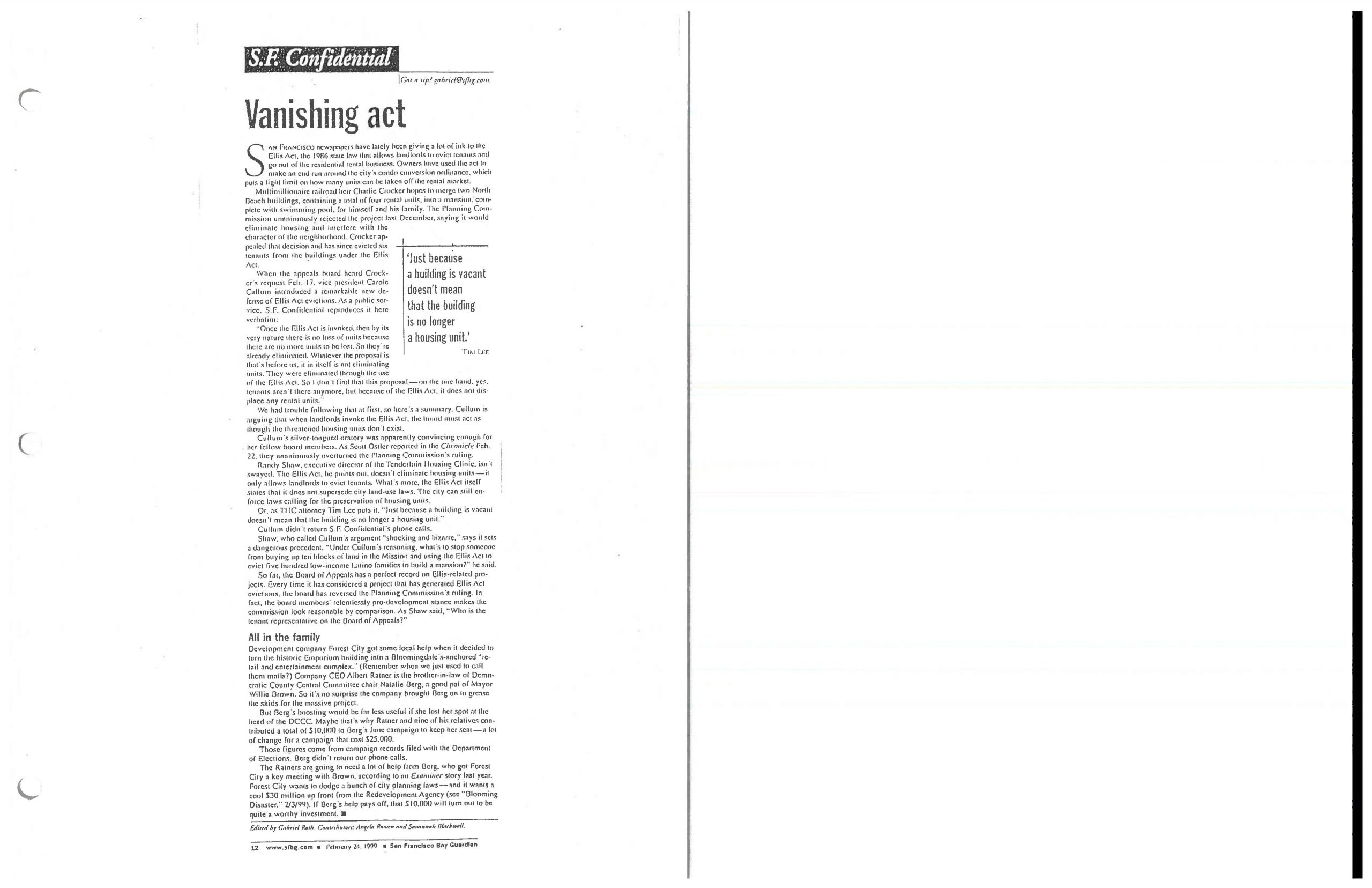 SAN FRANCISCO newspapers have lately been giving a lot of ink to the Ellis Act, the 1986 state law that allows landlords to evict tenants and go out of the residential rental business. Owners have used the act to make an end run around the city’s condo conversion ordinance, which puts a tight limit on how many units can be taken off the rental market.

Multimillionaire railroad heir Charlic Crocker hopes to merge own North Beach buildings, containing a total of four rental units, into a mansion. Complete with a swimming pool, for himself and his family. “The Planning Commission unanimously rejected the project last December, saying it would eliminate housing and interfere with the character of the neighborhood. Crocker appealed that decision and has since evicted six tenants from the buildings under the Ellis Act.

“Once the Ellis Act is invoked, then by its very nature there is no loss of units because there are no more units to be lost. So they’re already eliminated. Whatever the proposal is that’s before us, it in itself is not eliminating units. They were eliminated through the use of the Ellis Act. So I don’t find that this proposal — on the one hand, yes, tenants aren’t there anymore, but because of the Ellis Act, it does not displace any rental units.”

We had trouble following that at first, so here’s a summary. Cullum is arguing that when landlords invoke the Ellis Act, the board must act as though the threatened housing units don’t exist.

Cullum’s silver-tongued oratory was apparently convincing enough for her fellow board members. As Scott Ostler reported in the Chronicle Feb.. 22. they unanimously overturned the Planning Commission’s ruling.

Randy Shaw, executive director of the Tenderloin Housing Clinic, isn’t swayed. The Ellis Act, he points out, doesn’t eliminate housing units – it only allows landlords to evict tenants. What’s more, the Ellis Act itself states that it does not supersede city land-use laws. The city can still enforce laws calling for the preservation of housing units.

Or, as THC attorney Tim Lee puts it, “Just because a building is vacant doesn’t mean that the building is no longer a housing unit.”

Shaw, who called Cuiluin s argument “shocking and bizarre,” says it sets a dangerous precedent, “Under Culluin’s reasoning what’s to stop someone from buying up ten blocks of land in the Mission and using the Ellis Act to evict five hundred low-income Latino families to build a mansion?” he said.

So far, the Board of Appeals has a perfect record on Ellis-related projects. Every time it has considered a project that has generated Ellis Act evictions, the board has reversed the Planning Commission’s ruling. In fact, the board members’ relentlessly pro-development stance makes the commission look reasonable by comparison. As Shaw said, “Who is the tenant representative on the Board of Appeals?”

All in the family

Development company Forest City got some local help when it decided to turn the historic Emporium building into a Bloomingdale’s-anchored “retail and entertainment complex.” (Remember when we just used to call them malls?) Company CEO Albert Rainer is the brother-in-law of Democratic County Central Committee chair Natalie Berg, a good pal of Mayor Willie Brown. So it’s no surprise the company brought Berg on to grease the skids for the massive project.

But Berg’s boosting would be far less useful if she lost her spot at the head of the DCCC. Maybe that’s why Rainer and nine of his relatives contributed a total of $10,000 to Berg’s June campaign to keep her seat — a lot of change for a campaign that cost $25.000.

Those figures come from campaign records filed with the Department of Elections. Berg didn’t return our phone calls.

The Rainers are going to need a lot of help from Berg, who got Forest City a key meeting with Brown, according to an Examiner story last year. Forest City wants to dodge a bunch of city planning laws — and it wants a cool $30 million up front from the Redevelopment Agency (scc “Blooming Disaster,“ 2/3/99). Ir Berg’s help pays off, that $10,000 will turn out to be quite a worthy investment.