Accused slumlord Guenter Kaussen committed suicide on April 15, 1995. He left behind millions in debt and lawsuits, many of which were put into limbo after his death. 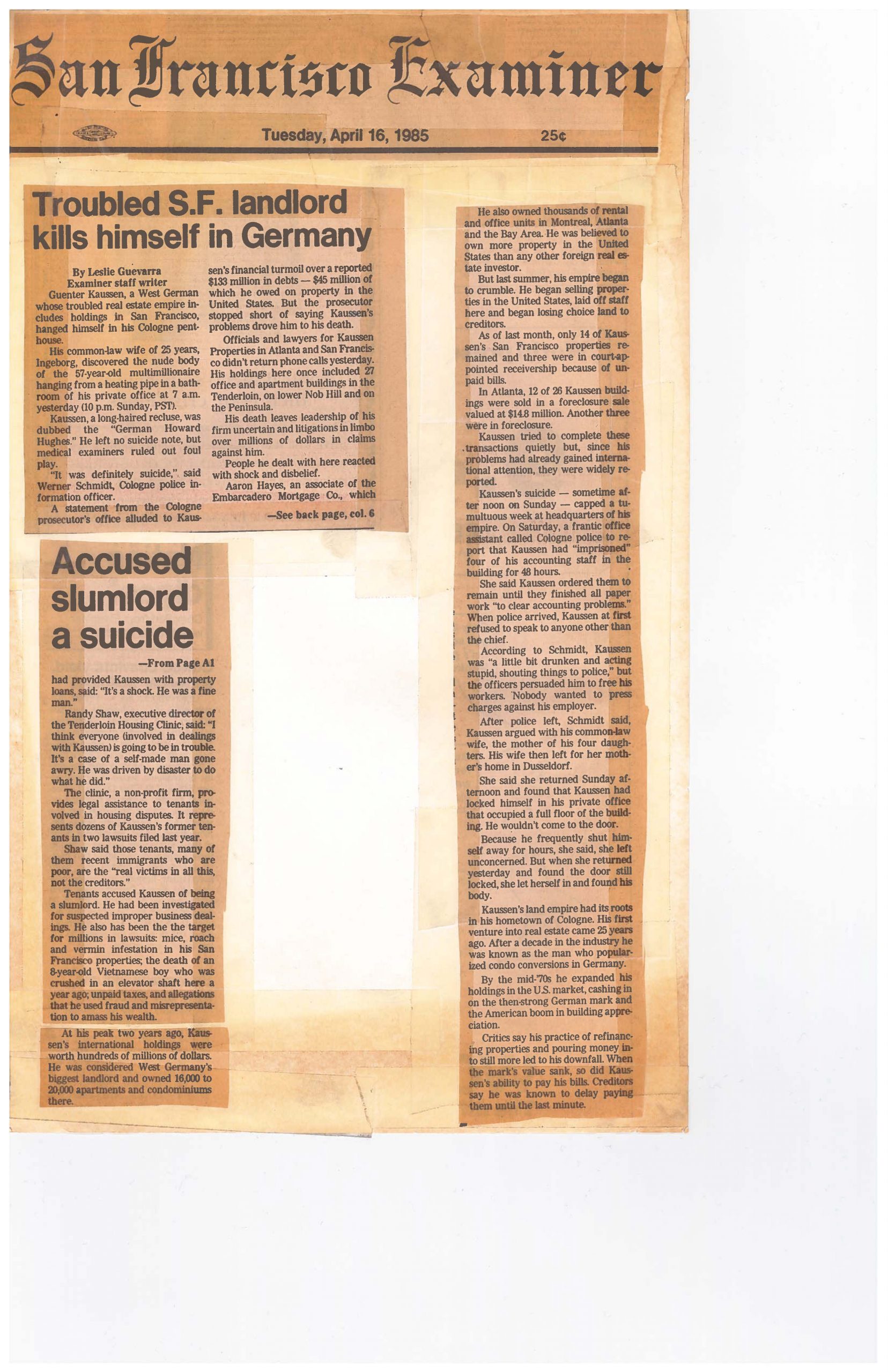 His common-law wife of 25 years, Ingeborg, discovered the nude body of the 57-year-old multimillionaire hanging from a heating pipe in a bathroom of his private office at 7 a.m. yesterday (10 p.m. Sunday, PST).

Kaussen, a long-haired recluse, was dubbed the “German Howard Hughes.” He left no suicide note, but medical examiners ruled out foul play.

A statement from the Cologne prosecutor’s office alluded to Kaussen’s financial turmoil over a reported $133 million in debts — $45 million of which he owed on property in the United States. But the prosecutor stopped short of saying Kaussen’s problem drove him to his death.

Officials and lawyers for Kaussen Properties in Atlanta and San Francisco didn’t return phone calls yesterday. His holdings here once included 27 office and apartment buildings in the Tenderloin, on lower Nob Hill and on the Peninsula.

His death leaves leadership of his firm uncertain and litigations in limbo over millions of dollars in claims against him.

People he dealt with here reacted with shock and disbelief.

Aaron Hayes, an associate of the Embarcadero Mortgage Co., had provided Kaussen with property loans, said: “It’s a shock. He was a fine man.”

Randy Shaw, executive director of the Tenderloin Housing Clinic, said: “I think everyone involved in dealings with Kaussen) is going to be in trouble. It’s a case of a self-made man gone awry. He was driven by disaster to do what he did.”

Shaw said those tenants, many of them recent immigrants who are poor, are the “real victims in all this, not the creditors.”

Tenants accused Kaussen of being a slumlord. He had been investigated for suspected improper business dealings. He also has been the the target for millions in lawsuits: mice, roach and vermin infestation in his San Francisco properties; the death of an 8 year-old Vietnamese boy who was crushed in an elevator shaft here a year ago, unpaid taxes, and allegations that he used fraud and misrepresentation to amass his wealth.

At his peak two years ago, Kaussen’s international holdings were worth hundreds of millions of dollars. He was considered West Germany’s biggest landlord and owned 16,000 to 20,000 apartments and condominiums there.

He also owned thousands of rental and office units in Montreal, Atlanta and the Bay Area. He was believed to own more property in the United States than any other foreign real estate investor.

But last summer, his empire began to crumble. He began selling properties in the United States, laid off staff here and began losing choice land to creditors.

As of last month, only 14 of Kaussen’s San Francisco properties remained and three were in court-appointed receivership because of unpaid bills.

In Atlanta, 12 of 26 Kaussen buildings were sold in a foreclosure sale valued at $14.8 million. Another three were in foreclosure.

Kaussen tried to complete these transactions quietly but, since his problems had already gained international attention, they were widely reported.

Kaussen’s suicide — sometime after noon on Sunday – capped a tumultuous week at headquarters of his empire. On Saturday, a frantic office assistant called Cologne police to report that Kaussen had “imprisoned” four of his accounting staff in the building for 48 hours.

She said Kaussen ordered them to remain until they finished all paperwork “to clear accounting problems.” When police arrived Kaussen at first refused to speak to anyone other than the chief.

According to Schmidt, Kaussen was “a little bit drunken and acting stupid, shouting things to police”, but the officers persuaded him to free his workers. Nobody wanted to press charges against his employer.

After police left, Schmidt said, Kaussen argued with his common-law wife, the mother of his four daughters. His wife then left for her mother’s home in Dusseldorf.

She said she returned Sunday afternoon and found that Kaussen had locked himself in his private office that occupied a full floor of the building. He wouldn’t come to the door.

Because he frequently shut himself away for hours, she said, she left unconcerned. But when she returned yesterday and found the door still locked, she let herself in and found his body.

Kaussen’s land empire had its roots in his hometown of Cologne. His first venture into real estate came 25 years ago. After a decade in the industry he was known as the man who popularized condo conversions in Germany.

By the mid-’70s he expanded his holdings in the U.S. market, cashing in on the then-strong German mark and the American boom in building appreciation

Critics say his practice of refinancing properties and pouring money into still more led to his downfall. When the mark’s value sank, so did Kaussen’s ability to pay his bills. Creditors say he was known to delay paying them until the last minute.