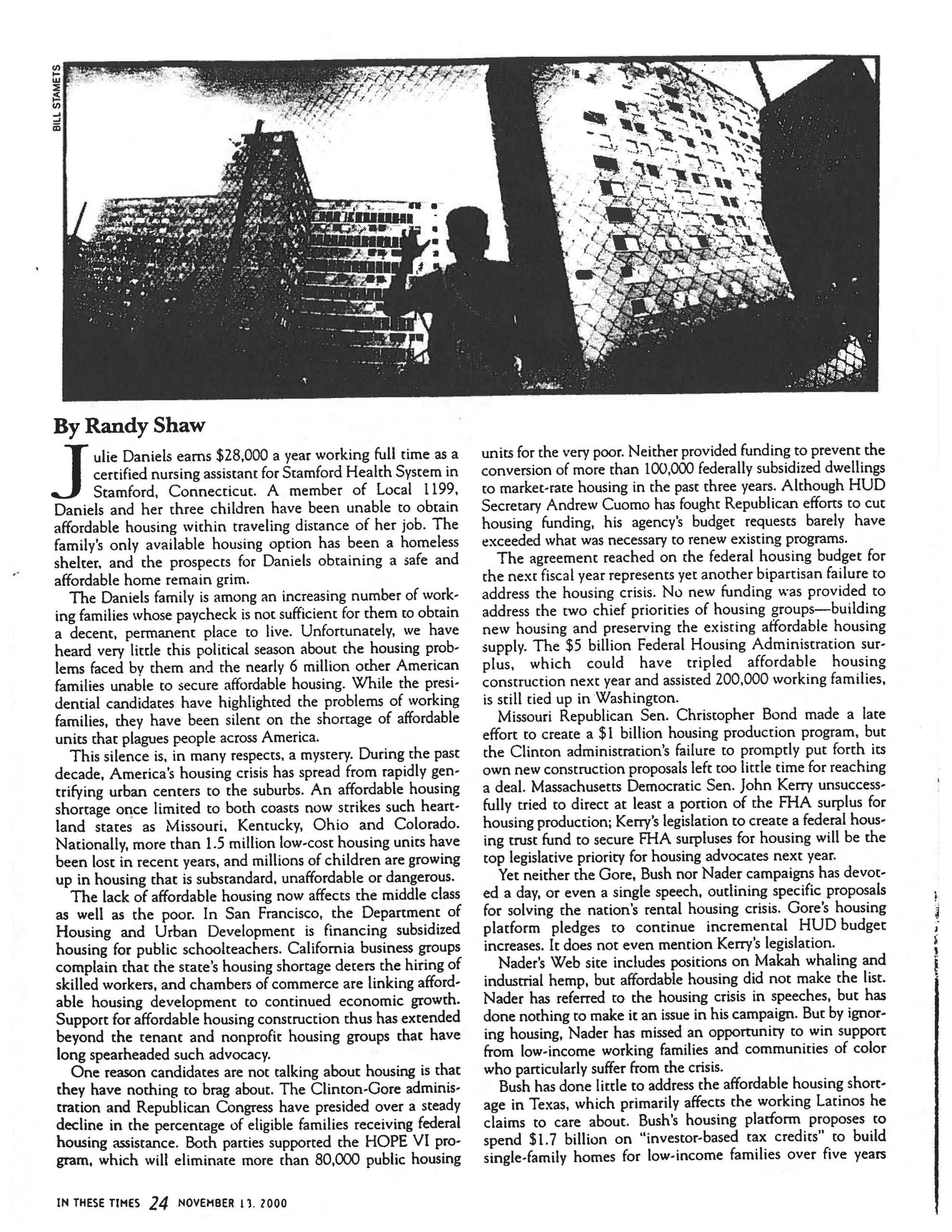 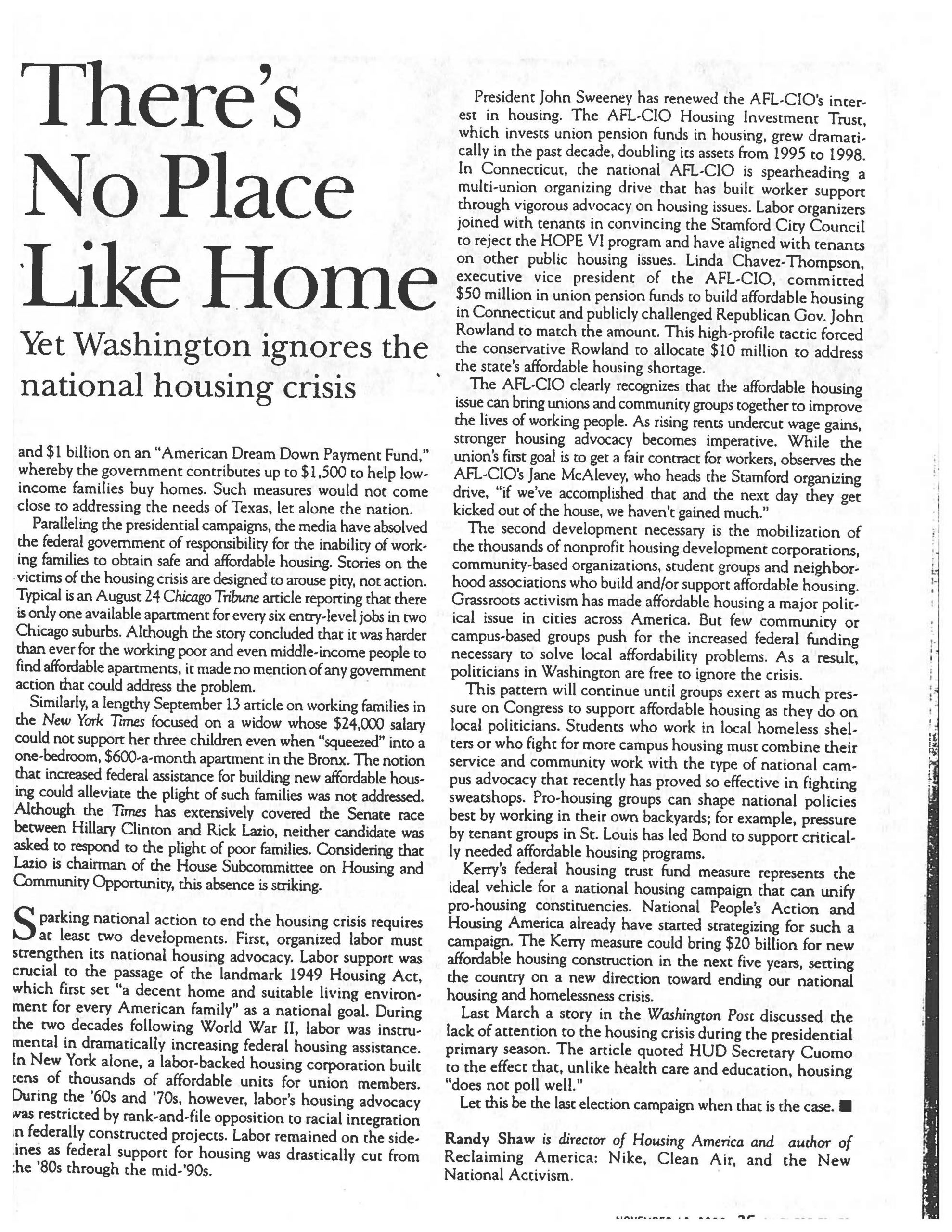 Julie Daniels earns $28,000 a year working full time as a certified nursing assistant for Stamford Health System in Stamford, Connecticut. A member of Local 1199, Daniels and her three children have been unable to obtain affordable housing within traveling distance of her job. The family’s only available housing option has been a homeless shelter, and the prospects for Daniels obtaining a safe and affordable home remain grim.

The Daniels family is among an increasing number of working families whose paycheck is not sufficient for them to obtain a decent, permanent place to live. Unfortunately, we have heard very little this political season about the housing problems faced by them and the nearly 6 million other American families unable to secure affordable housing. While the presidential candidates have highlighted the problems of working families, they have been silent on the shortage of affordable units that plagues people across America.

This silence is, in many respects, a mystery. During the past decade, America’s housing crisis has spread from rapidly gentrifying urban centers to the suburbs. An affordable housing shortage once limited to both coasts now strikes such heartland states as Missouri, Kentucky, Ohio, and Colorado. Nationally, more than 1.5 million low-cost housing units have been lost in recent years, and millions of children are growing up in housing that is substandard, unaffordable or dangerous.

The lack of affordable housing now affects the middle class as well as the poor. In San Francisco, the Department of Housing and Urban Development is financing subsidized housing for public school teachers. California business groups complain that the state’s housing shortage deters the hiring of skilled workers, and chambers of commerce are linking affordable housing development to continued economic growth. Support for affordable housing construction thus has extended beyond the tenant and nonprofit housing groups that have long spearheaded such advocacy.

One reason candidates are not talking about housing is that they have nothing to brag about. The Clinton-Gore administration and Republican Congress have presided over a steady decline in the percentage of eligible families receiving federal housing assistance. Both parties supported the HOPE VI program, which will eliminate more than 80,000 public housing units for the very poor. Neither provided funding to prevent the conversion of more than 100,000 federally subsidized dwellings to market-race housing in the past three years. Although HUD Secretary Andrew Cuomo has fought Republican efforts to cut housing funding, his agency’s budget requests barely have exceeded what was necessary to renew existing programs.

The agreement reached on the federal housing budget for the next fiscal year represents yet another bipartisan failure to address the housing crisis. No new funding was provided to address the two chief priorities of housing groups–building new housing and preserving the existing affordable housing supply. The $5 billion Federal Housing Administration surplus, which could have tripled affordable housing construction next year and assisted 200,000 working families, is still tied up in Washington.

Missouri Republican Sen. Christopher Bond made a late effort to create a $1 billion housing production program, but the Clinton administration’s failure to promptly put forth its own new construction proposals left too little time for reaching a deal. Massachusetts Democratic Sen. John Kerry unsuccessfully tried to direct at least a portion of the FHA surplus for housing production; Kerry’s legislation to create a federal housing trust fund to secure FHA surpluses for housing will be the top legislative priority for housing advocates next year.

Yet neither the Gore, Bush, nor Nader campaigns have devoted a day, or even a single speech, outlining specific proposals for solving the nation’s rental housing crisis. Gore’s housing platform pledges to continue incremental HUD budget increases. It does not even mention Kerry’s legislation.

Nader’s website includes positions on Makah whaling and industrial hemp, but affordable housing did not make the list. Nader has referred to the housing crisis in speeches, but has done nothing to make it an issue in his campaign. But by ignoring housing, Nader has missed an opportunity to win support from low-income working families and communities of color who particularly suffer from the crisis.

Bush has done little to address the affordable housing shortage in Texas, which primarily affects the working Latinos he claims to care about. Bush’s housing platform proposes to spend $1.7 billion on “investor-based tax credits” to build single-family homes for low-income families over five years and $1 billion on an “American Dream Down Payment Fund,” whereby the government contributes up to $1,500 to help low-income families buy homes. Such measures would not come close to addressing the needs of Texas, let alone the nation.

Paralleling the presidential campaigns, the media have absolved the federal government of responsibility for the inability of working families to obtain safe and affordable housing. Stories on the victims of the housing crisis are designed to arouse pity, not action. Typical is an August 24 Chicago Tribune article reporting that there is only one available apartment for every six entry-level jobs in two Chicago suburbs. Although the story concluded that it was harder than ever for the working poor and even middle-income people to find affordable apartments, it made no mention of any government action that could address the problem.

Similarly, a lengthy September 13 article on working families in the New York Times focused on a widow whose $24,000 salary could not support her three children even when “squeezed” into a one-bedroom, $600-a-month apartment in the Bronx. The notion that increased federal assistance for building new affordable housing could alleviate the plight of such families was not addressed. Although the Times has extensively covered the Senate race between Hillary Clinton and Rick Lazio, neither candidate was asked to respond to the plight of poor families. Considering that Lazio is chairman of the House Subcommittee on Housing and Community Opportunity, this absence is striking.

Sparking national action to end the housing crisis requires at least two developments. First, organized labor must strengthen its national housing advocacy. Labor support was crucial to the passage of the landmark 1949 Housing Act, which first set “a decent home and suitable living environment for every American family” as a national goal. During the two decades following World War II, labor was instrumental in dramatically increasing federal housing assistance. In New York alone, a labor-backed housing corporation built tens of thousands of affordable units for union members. During the ’60s and ’70s, however, labor’s housing advocacy was restricted by rank-and-file opposition to racial integration in federally constructed projects. Labor remained on the sidelines as federal support for housing was drastically cut from the ’80s through the mid-’90s.

President John Sweeney has renewed the AFL-CIO’s interest in housing. The AFL-CIO Housing Investment Trust, which invests union pension funds in housing, grew dramatically in the past decade, doubling its assets from 1995 to 1998. In Connecticut, the national AFL-CIO is spearheading a multi-union organizing drive that has built worker support through vigorous advocacy on housing issues. Labor organizers joined with tenants in convincing the Stamford City Council to reject the HOPE VI program and have aligned with tenants on other public housing issues. Linda Chavez-Thompson, executive vice president of the AFL-CIO, committed $50 million in union pension funds to build affordable housing in Connecticut and publicly challenged Republican Gov. John Rowland to match the amount. This high-profile tactic forced the conservative Rowland to allocate $10 million to address the state’s affordable housing shortage.

The AFL-CIO clearly recognizes that the affordable housing issue can bring unions and community groups together to improve the lives of working people. As rising rents undercut wage gains, stronger housing advocacy becomes imperative. While the union’s first goal is to get a fair contract for workers, observes the AFL-CIO’s Jane McAlevey, who heads the Stamford organizing drive, “if we’ve accomplished that and the next day they get kicked out of the house, we haven’t gained much.”

The second development necessary is the mobilization of the thousands of nonprofit housing development corporations, community-based organizations, student groups, and neighborhood associations who build and/or support affordable housing. Grassroots activism has made affordable housing a major political issue in cities across America. But few community or campus-based groups push for the increased federal funding necessary to solve local affordability problems. As a result, politicians in Washington are free to ignore the crisis.

This pattern will continue until groups exert as much pressure on Congress to support affordable housing as they do on local politicians. Students who work in local homeless shelters or who fight for more campus housing must combine their service and community work with the type of national campus advocacy that recently has proved so effective in fighting sweatshops. Pro-housing groups can shape national policies best by working in their own backyards; for example, pressure by tenant groups in St. Louis has led Bond to support critically needed affordable housing programs.

Kerry’s federal housing trust fund measure represents the ideal vehicle for a national housing campaign that can unify pro-housing constituencies. National People’s Action and Housing America already have started strategizing for such a campaign. The Kerry measure could bring $20 billion for new affordable housing construction in the next five years, setting the country on a new direction toward ending our national housing and homelessness crisis.

Last March, a story in the Washington Post discussed the lack of attention to the housing crisis during the presidential primary season. The article quoted HUD Secretary Cuomo to the effect that, unlike health care and education, housing “does not poll well.” Let this be the last election campaign when that is the case.

Randy Shaw is director of Housing America and author of Reclaiming America: Nike, Clean Air, and the New National Activism.