Tenants in San Francisco residential hotels are allowed no visitors and experience lock outs. Randy Shaw pushes for legislation to be made instead of a slower litigation route, to get tenants’ rights to visitors. 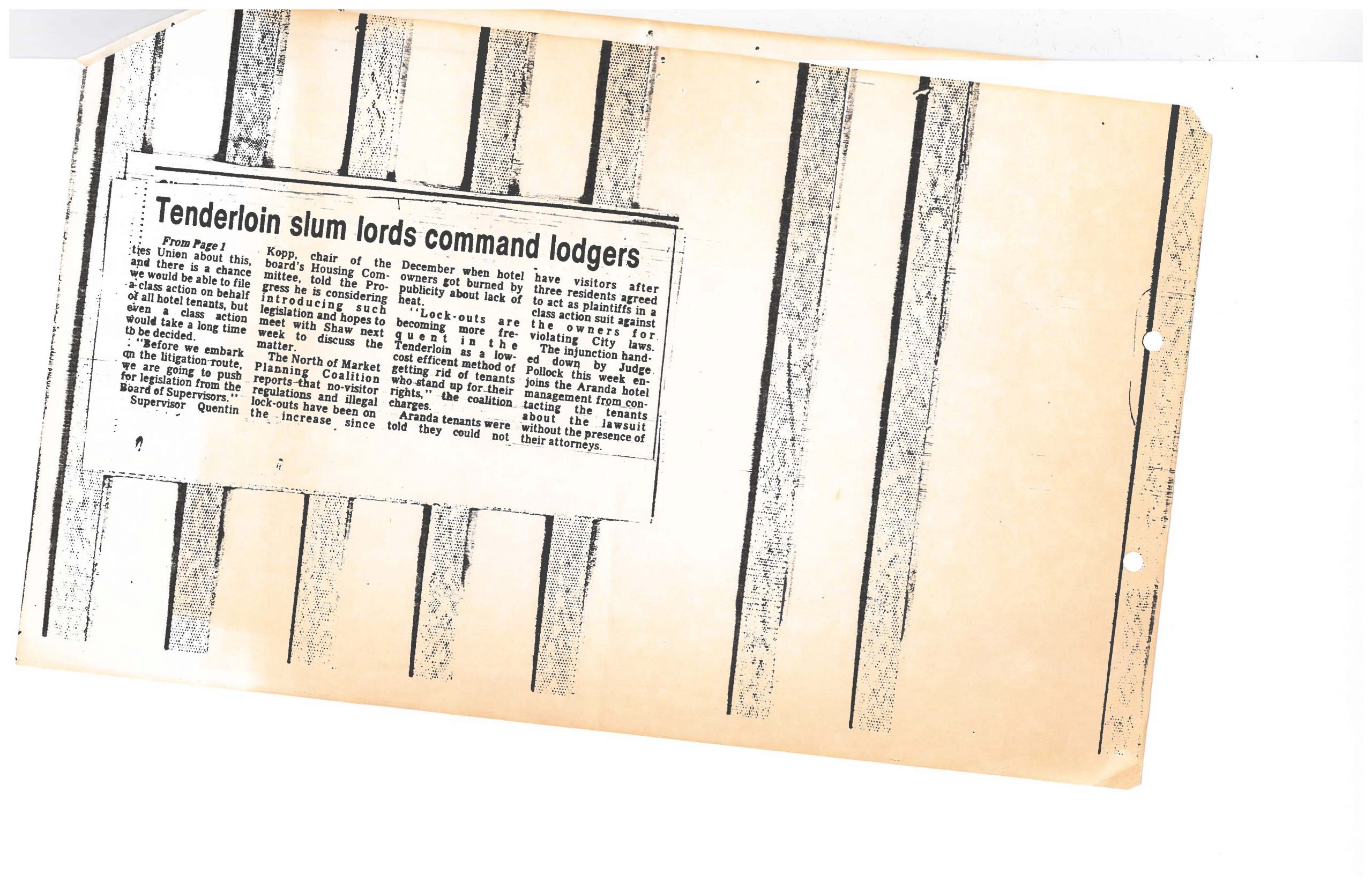 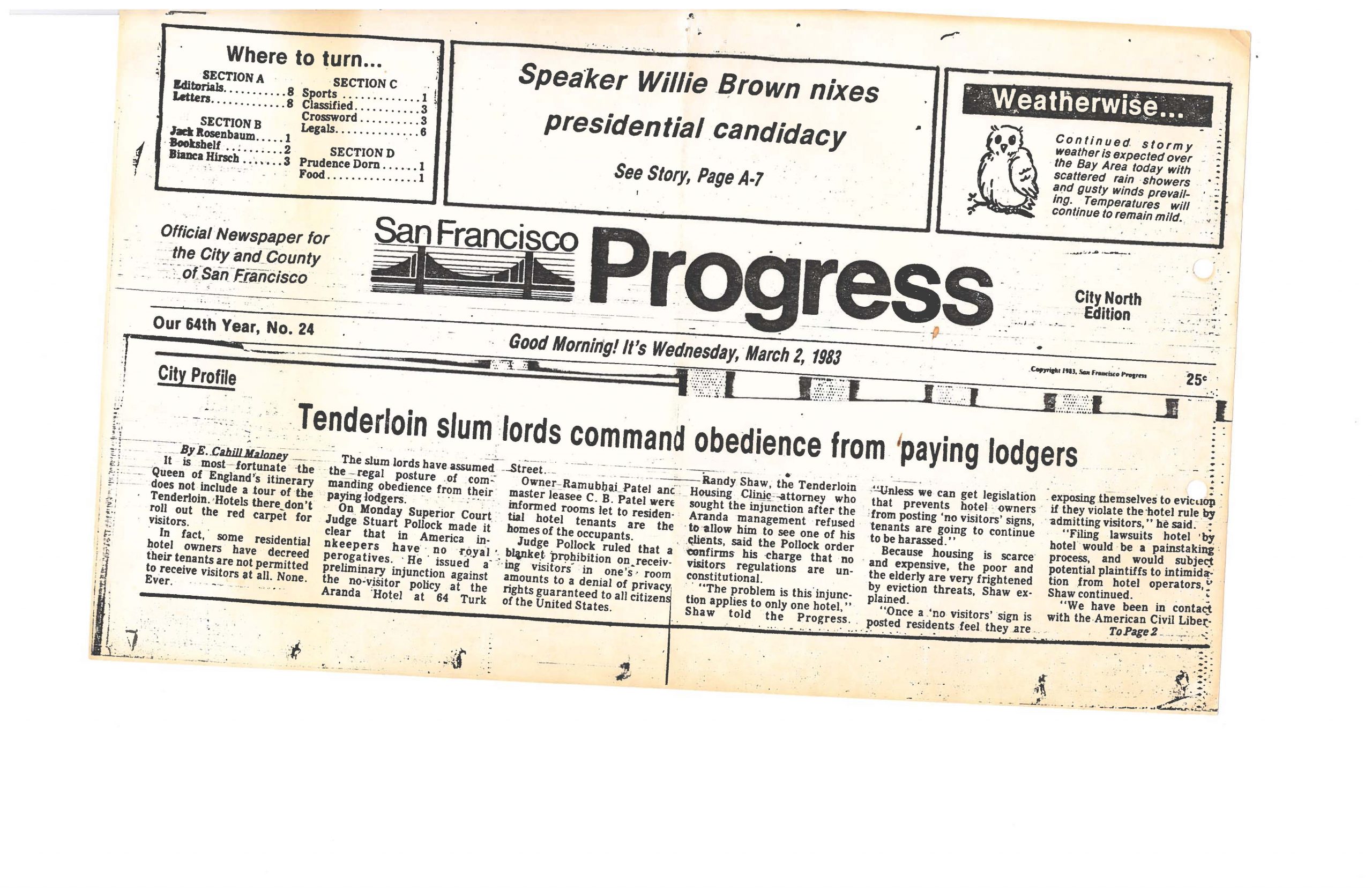 It is most fortunate the Queen of England’s itinerary does not include a tour of the Tenderloin. Hotels there don’t roll out the red carpet for visitors.

In fact, some residential hotel owners have decreed their tenants are not permitted to receive visitors at all. None. Ever.

The slum lords have assumed the regal posture of commanding obedience from their paying lodgers.

On Monday Superior Court Judge Stuart Pollock made it clear that in America innkeepers have no royal prerogatives. He issued a preliminary injunction against the no-visitor policy at the Aranda Hotel at 64 Turk Street.

Owner Ramubhai Patel and master lease C.B. Patel were informed rooms let to residential hotel tenants are the homes of the occupants.

Judge Pollock ruled that a blanket prohibition on receiving visitors in one’s room amounts to a denial of privacy rights guaranteed to all citizens of the United States.

Randy Shaw, the Tenderloin Housing Clinic attorney who sought the injunction after the Aranda management refused to allow him to see one of his clients, said the Pollock order confirms his charge that no visitors regulations are unconstitutional.

“The problem is this injunction applies to only one hotel,” Shaw told the Progress. “Unless we can get legislation that prevents hotel owners from posting ‘no visitors’ signs, tenants are going to continue to be harassed.”

Because housing is scarce and expensive, the poor and the elderly are very frightened by eviction threats, Shaw explained.

“Once a ‘no visitors’ sign is posted residents feel they are exposing themselves to eviction if they violate the hotel rule by admitting visitors,” he said.

“Filing lawsuits hotel by hotel would be a painstaking process, and would subject potential plaintiffs to intimidation from hotel operations, Shaw continued.

“We have been in contact with the American Civil Liberties Union about this, and there is a chance we would be able to file a class action on behalf of all hotel tenants, but even a class action would take a long time to be decided.”

“Before we embark on the litigation route, we are going to push for legislation from the Board of Supervisors.”

Supervisor Quentin Kopp, chair of the board’s Housing Committee, told the Progress he is considering introducing such legislation and hopes to meet with Shaw next week to discuss the matter.

The North of Market Planning Coalition reports that no-visitor regulations and illegal lock-outs have been on the increase since December when hotel owners get burned by publicity about lack of heat.

“Lock-outs are becoming more frequent in the Tenderloin as a low-cost efficient method of getting rid of tenants who stand up for their rights,” the coalition charges.

Aranda tenants were told they could not have visitors after three residents agreed to act as plaintiffs in a class action suit against the owner for violating City laws.

The injunction handed down by Judge Pollock this week enjoins the Aranda hotel management from contacting the tenants about the lawsuit without the presence of their attorneys.