The once vast U.S. holdings of West German real estate tycoon Guenther Kaussen, one of San Francisco’s most complained about landlords, have shrunk significantly because of his precarious position. 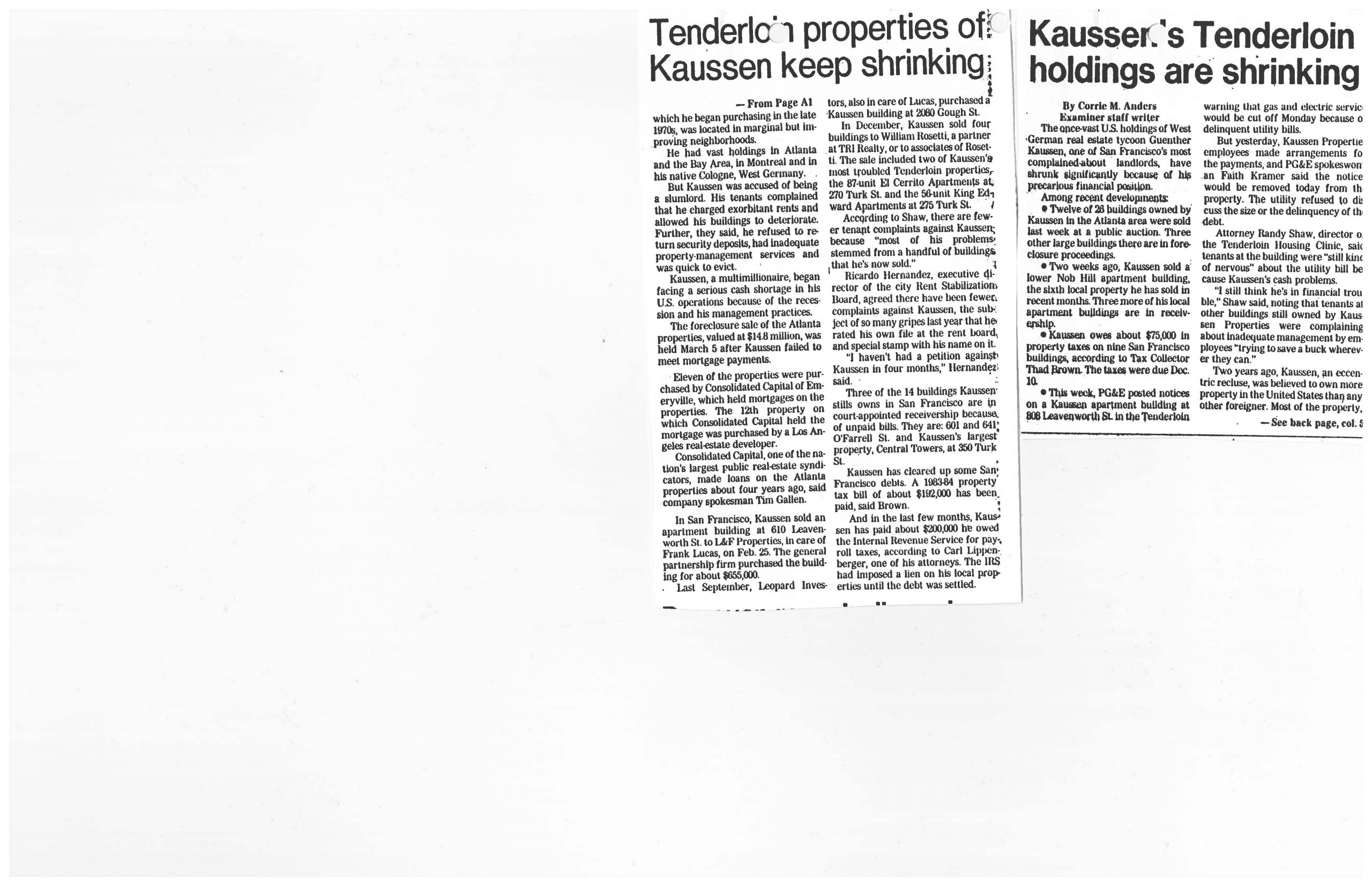 The once vast U.S. holdings of West German real estate tycoon Guenther Kaussen, one of San Francisco’s most complained about landlords, have shrunk significantly because of his precarious position.

But yesterday, Kaussen Properties employees made arrangements for the payments, and PG&E spokeswoman Faith Kramer said the notice would be removed today from the property. The utility refused to discuss the size or the delinquency of the debt.

Attorney Randy Shaw, director of the Tenderloin Housing Clinic, said tenants at the building were “still kind of nervous” about the utility bill because Kaussen’s cash problems.

“I still think he’s in financial trouble,” Shaw said, noting that tenants at other buildings still owned by Kaussen Properties were complaining about inadequate management by employees “trying to save a buck wherever they can.”

Two years ago, Kaussen, an eccentric recluse, was believed to own more property in the United States than any other foreigner. Most of the property which he began purchasing in the late 1970s, was located in marginal but improving neighborhoods.

He had vast holdings in Atlanta and the Bay Area, in Montreal and in his native Cologne, West Germany.

But Kaussen was accused of being a slumlord. His tenants complained that he charged exorbitant rents and allowed his buildings to deteriorate. Further, they said, he refused to return security deposits, had inadequate property-management services and was quick to evict.

Kaussen, a multimillionaire, began facing a serious cash shortage in his U.S. operations because of the recession and his management practices.

The foreclosure sale of the Atlanta properties, valued at $14.8 million, was held March 5 after Kaussen failed to meet mortgage payments.

Consolidated Capital, one of the nation’s largest public real-estate syndicators, made loans on the Atlanta properties about four years ago, said company spokesman Tim Gallen.

In San Francisco, Kaussen sold an apartment building at 610 Leavenworth St. to L&F Properties, in care of Frank Lucas, on Feb. 25. The general partnership firm purchased the building for about $655,000.

In December, Kaussen sold four buildings to William Rosetti, a partner at TRI Realty, or to associates of Rosetti. The sale included two of Kaussen’s most troubled Tenderloin properties, the 87-unit El Cerrito Apartments at 270 Turk St. and the 56-unit King Edward Apartments at 275 Turk St.

According to Shaw, there are fewer tenant complaints against Kaussen because “most of his problems stemmed from a handful of buildings that he’s now sold.”

Ricardo Hernandez, executive director of the city Rent Stabilization Board, agreed there have been fewer complaints against Kaussen, the subject of so many gripes last year that he rated his own file at the rent board and special stamp with his name on it.

“I haven’t had a petition against Kaussen in four months,” Hernandez said.

Three of the 14 buildings Kaussen still owns in San Francisco are in court-appointed receivership because of unpaid bills. They are: 601 and 641 O’Farrell St. and Kaussen’s largest property, Central Towers, at 350 Turk St.

And in the last few months, Kaussen has paid about $200,000 he owed the Internal Revenue Service for payroll taxes, according to Carl Lippenberger, one of his attorneys. The IRS had imposed a lien on his local properties until the debt was settled.