The Mayfair’s then owner tries to push out tenants of the residential hotel. 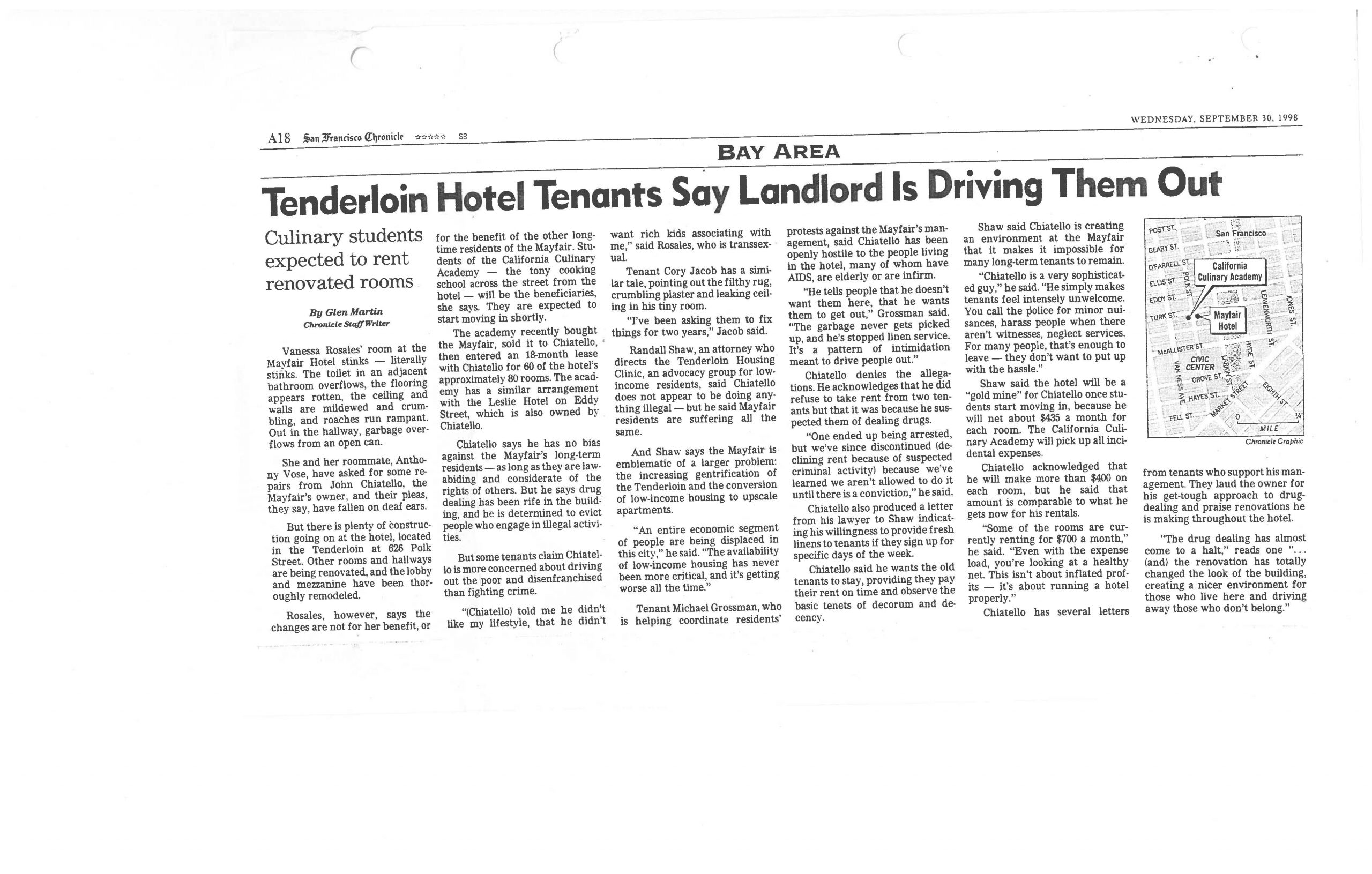 Tenderloin Hotel Tenants Say Landlord Is Driving Them Out

Vanessa Rosales’ room at the Mayfair Hotel stinks — literally stinks. The toilet in an adjacent bathroom overflows, the flooring appears rotten, the ceiling and walls are mildewed and crumbling, and roaches run rampant. Out in the hallway, garbage overflows from an open can.

She and her roommate, Anthony Vose, have asked for some repairs from John Chiatello, the Mayfair’s owner, and their pleas, they say, have fallen on deaf ears.

But there is plenty of construction going on at the hotel, located in the Tenderloin at 626 Polk Street. Other rooms and hallways are being renovated, and the lobby and mezzanine have been thoroughly remodeled.

Rosales, however, says the changes are not for her benefit, or for the benefit of the other longtime residents of the Mayfair. Students of the California Culinary Academy — the tony cooking school across the street from the hotel — will be the beneficiaries, she says. They are expected to start moving in shortly.

The academy recently bought the Mayfair, sold it to Chiatello, then entered an 18-month lease with Chiatello for 60 of the hotel’s approximately 80 rooms. The academy has a similar arrangement with the Leslie Hotel on Eddy Street, which is also owned by Chiatello.

Chiatello says he has no bias against the Mayfair’s long-term residents — as long as they are law-abiding and considerate of the rights of others. But he says drug dealing has been rife in the building, and he is determined to evict people who engage in illegal activities.

But some tenants claim Chiatello is more concerned about driving out the poor and disenfranchised than fighting crime.

“(Chiatello) told me he didn’t like my lifestyle, that he didn’t want rich kids associating with me,” said Rosales, who is transexual.

Tenant Cory Jacob has a similar tale, pointing out the filthy rug, crumbling plaster and leaking ceiling in his tiny room.

“I’ve been asking them to fix things for two year,” Jacob said.

Randall Shaw, an attorney who directs the Tenderloin Housing Clinic, an advocacy group for low-income residents, said Chiatello does not appear to be doing anything illegal — but he said Mayfair residents are suffering all the same.

And Shaw says the Mayfair is emblematic of a larger problem: the increasing gentrification of the Tenderloin and the conversion of low-income housing to upscale apartments.

“An entire economic segment of people are being displaced in this city,” he said. “The availability of low-income housing has never been more critical, and it’s getting worse all the time.”

Tenant Michael Grossman, who is helping coordinate residents’ protest against the Mayfair’s management, said Chiatello has been openly hostile to the people living in the hotel, many of whom have AIDS, are elderly or are infirm.

“He tells people that he doesn’t want them here, that he wants them to get out,” Grossman said. “The garbage never gets picked up, and he’s stopped linen service. It’s a pattern of intimidation meant to drive people out.”

Chiatello denies the allegations. He acknowledges that he did refuse to take rent from two tenants but that it was because he suspected them of dealing drugs.

“One ended up being arrested, but we’ve since discontinued (declining rent because of suspected criminal activity) because we’ve learned we aren’t allowed to do it until there is a conviction,” he said.

Chiatello also produced a letter from his lawyer to Shaw indicating his willingness to provide fresh linens to tenants if they sign up for specific days of the week.

Chiatello said he wants the old tenants to stay, providing they pay their rent on time and observe the basic tenets of decorum and decency.

Shaw said Chiatello is creating an environment at the Mayfair that it makes it impossible for many long-term tenants to remain.

“Chiatello is a very sophisticated guy,” he said. “He simply makes tenants feel intensely unwelcome. You call the police for minor nuisances, harass people when there aren’t witnesses, neglect services. For many people, that’s enough to leave — they don’t want to put up with the hassle.”

Shaw said the hotel will be a “gold mine” for Chiatello once students start moving in, because he will net about $435 a month for each room. The California Culinary Academy will pick up all incidental expenses.

Chiatello acknowledged that he will make more than $400 on each room, but he said that amount is comparable to what he gets now for his rentals.

“Some of the rooms are currently renting for $700 a month,” he said. “Even with the expense load, you’re looking at a healthy net. This isn’t about inflated profits — it’s about running a hotel properly.”

Chiatello has several letters from tenants who support his management. They applaud the owner for his get-tough approach to drug-dealing and praise renovations he is making throughout the hotel.

“The drug dealing has almost come to a halt,” reads one”… (and) the renovations has totally changed the look of the building, creating a nicer environment for those who live here and driving away those who don’t belong.”