As a recent UC Hastings graduate, Randy Shaw received funding from the Berkeley Law Foundation (BLF) for the Anti-Displacement Project, a program of the newly formed Tenderloin Housing Clinic. 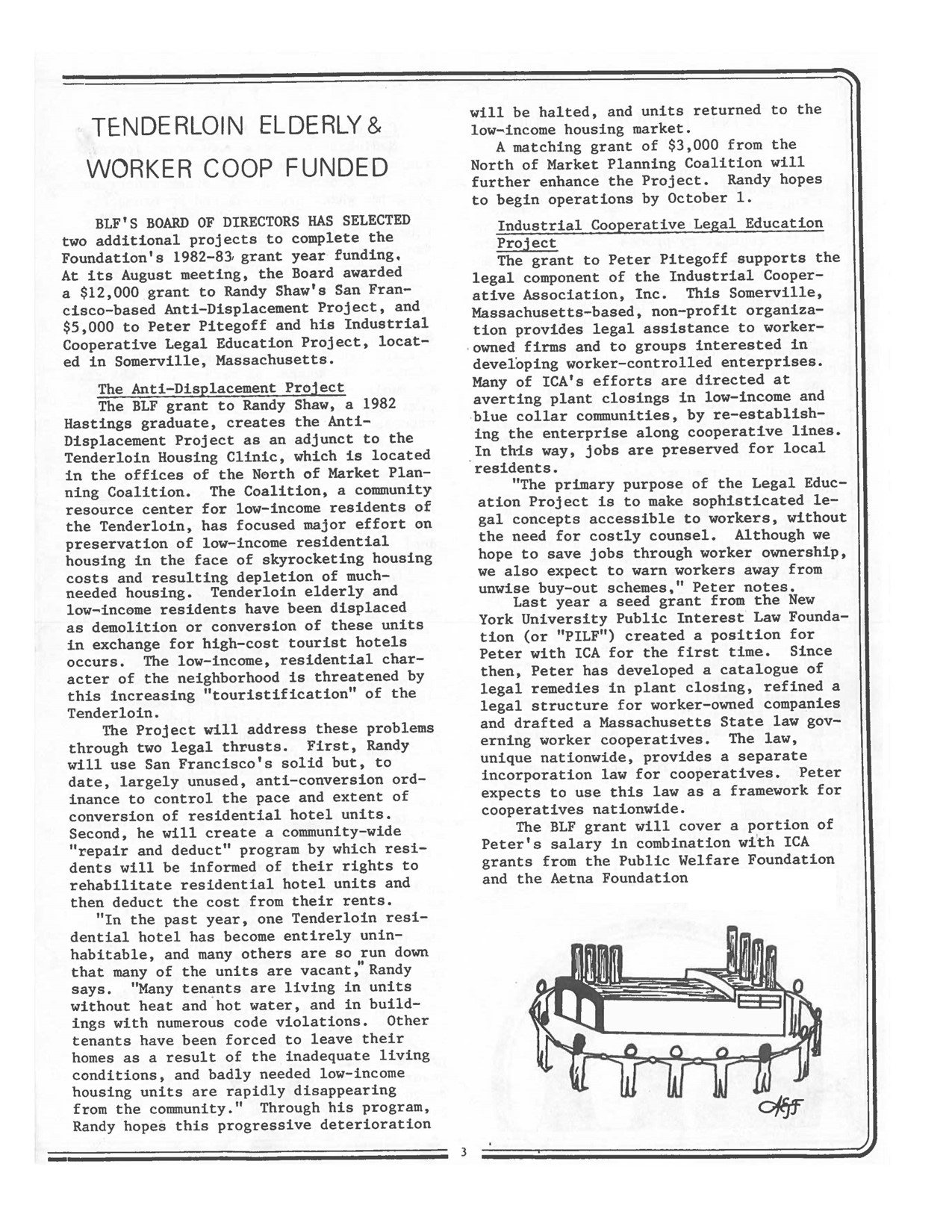 BLF’s Board of Directors has selected two additional projects to complete the Foundation’s 1982-83 grant year funding. At its August meeting, the Board awarded a $12,000 grant to Randy Shaw’s San Francisco-based Anti-Displacement Project and $5,000 to Peter Pitegoff and his Industrial Cooperative Legal Education Project, located in Somerville, Massachusetts.

The BLF grant to Randy Shaw, a 1982 Hastings graduate, creates the Anti-Displacement Project as an adjunct to the Tenderloin Housing Clinic, which is located in the offices of the North of Market Planning Coalition. The Coalition, a community resource center for low-income residents of the Tenderloin, has focused major effort on preservation of low-income residential housing in the face of skyrocketing housing costs and resulting depletion of much-needed housing. Tenderloin elderly and low-income residents have been displaced as demolition or conversion of these units in exchange for high-cost tourist hotels occurs. The low-income, residential character of the neighborhood is threatened by this increasing “touristification” of the Tenderloin.

The Project will address these problems through two legal thrusts. First, Randy will use San Francisco’s solid but, to date, largely unused, anti-conversion ordinance to control the pace and extent of conversion of residential hotel units. Second, he will create a community-wide “repair and deduct” program by which residents will be informed of their rights to rehabilitate residential hotel units and then deduct the cost from their rents.

“In the past year, one Tenderloin residential hotel has become entirely uninhabitable, and many others are so run down that many of the units are vacant,” Randy says. “Many tenants are living in units without heat and hot water, and in buildings with numerous code violations. Other tenants have been forced to leave their homes as a result of the inadequate living conditions, and badly needed low-income housing units are rapidly disappearing from the community.”

Through his program, Randy hopes this progressive deterioration will be halted, and units returned to the low-income housing market. A matching grant of $3,000 from the North of Market Planning Coalition will further enhance the Project. Randy hopes to begin operations by October 1.

The grant to Peter Pitegoff supports the legal component of the Industrial Cooperative Association, Inc (ICA). This Somerville, Massachusetts-based, non-profit organization provides legal assistance to worker owned firms and to groups interested in developing worker-controlled enterprises. Many of ICA’s efforts are directed at averting plant closings in low-income and blue collar communities, by re-establishing the enterprise along cooperative lines. In this way, jobs are preserved for local residents.

“The primary purpose of the Legal Education Project is to make sophisticated legal concepts accessible to workers, without the need for costly counsel. Although we hope to save jobs through worker ownership, we also expect to warn workers away from unwise buy-out schemes,” Peter notes.

Last year a seed grant from the New York University Public Interest Law Foundation (or “PILF”) created a position for Peter with ICA for the first time. Since then, Peter has developed a catalog of legal remedies in plant closing, refined a legal structure for worker-owned companies, and drafted a Massachusetts State law governing worker cooperatives. The law, unique nationwide, provides a separate incorporation law for cooperatives. Peter expects to use this law as a framework for cooperatives nationwide.

The BLF grant will cover a portion of Peter’s salary in combination with ICA grants from the Public Welfare Foundation and the Aetna Foundation.