Housing attorney Andrew Zacks loses his claim that Tenderloin Housing Clinic is not really a nonprofit agency after THC wins Suit over legal fees. The case is to be appealed by Zacks who hopes to force the clinic to disgorge hundreds of thousands of dollars in attorney fees the clinic has collected over the years. 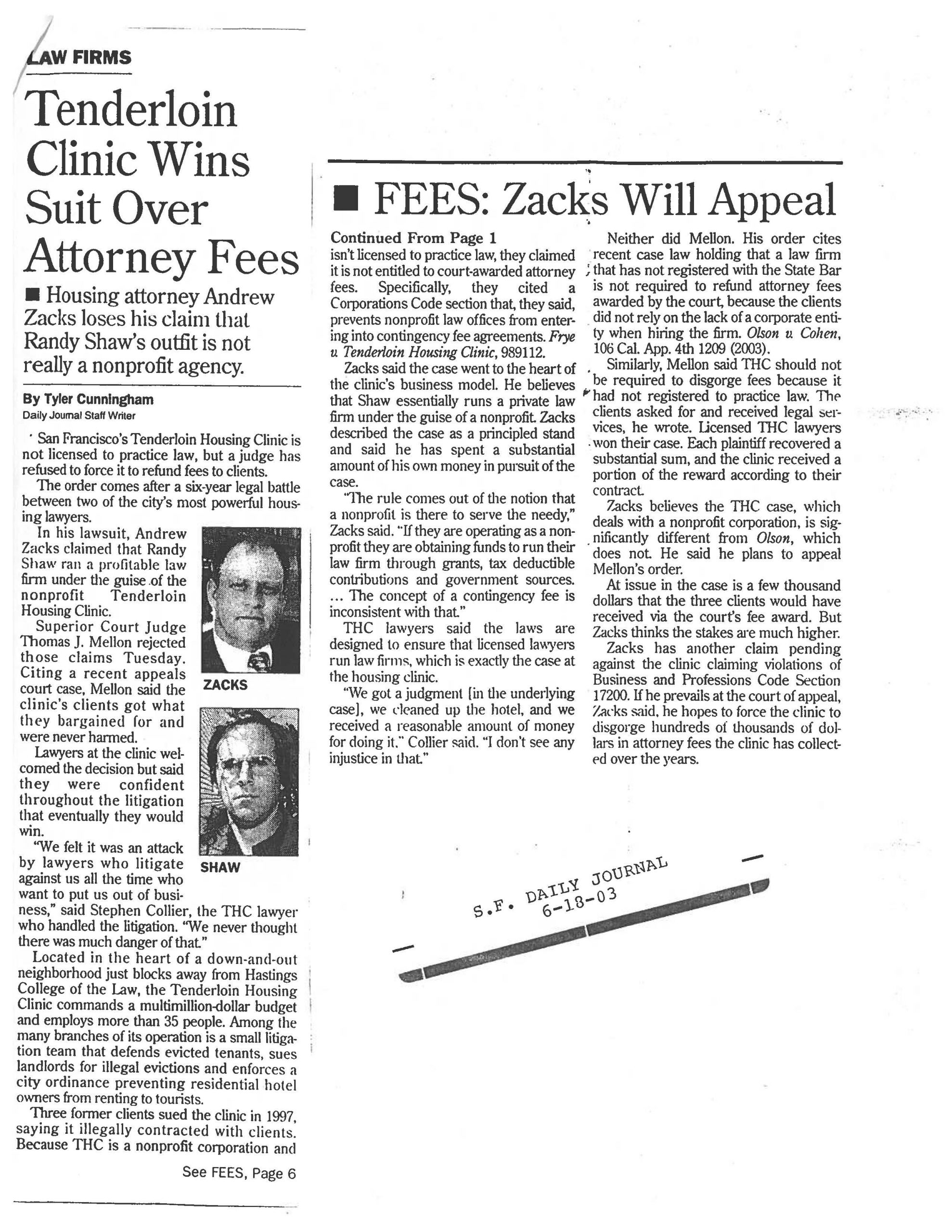 San Francisco’s Tenderloin Housing Clinic is not licensed to practice law, but a judge has refused to force it to refund fees to clients.

The order comes after a six-year legal battle between two of the city’s most powerful housing lawyers.

In his lawsuit, Andrew Zacks claimed that Randy Shaw ran a profitable law firm under the guise of the nonprofit Tenderloin Housing Clinic.

Superior Court Judge Thomas J. Mellon rejected those claims Tuesday. Citing a recent appeals court case, Mellon said the clinic’s clients got what they bargained for and were never harmed.

Lawyers at the clinic welcomed the decision but said they were confident throughout the litigation that eventually they would win.

“We felt it was an attack by lawyers who litigate against us all the time who want to put us out of business,” said Stephen Collier, the THC lawyer who handled the litigation. “We never thought there was much danger of that.”

Located in the heart of a down-and-out neighborhood just blocks away from Hastings College of the Law, the Tenderloin Housing Clinic commands a multimillion-dollar budget and employs more than 35 people. Among the many branches of its operation is a small litigation team that defends evicted and enforces a city ordinance preventing residential hotel owners from renting to tourists.

Three former clients sued the clinic in 1997, saying it illegally contracted with clients. Because THC is a nonprofit corporation and…

…isn’t licensed to practice law, they claimed it is not entitled to court-awarded attorney fees. Specifically, they cited a Corporations Code section that, they said, prevents nonprofit law offices from entering into contingency fee agreements. Frye v. Tenderloin Housing Clinic, 989112.

Zacks said the case went to the heart of the clinic’s business model. He believes that Shaw essentially runs a private law firm under the guise of a nonprofit. Zacks described the case as a principled stand and said he has spent a substantial amount of his own money in pursuit of the case.

“The rule comes out of the notion that a nonprofit is there to serve the needy,” Zacks said. “If they are operating as a nonprofit they are obtaining funds to run their law firm through grants, tax deductible contributions and government sources.

…The concept of a contingency fee is inconsistent with that.”

THC lawyers said the laws are designed to ensure that licensed lawyers run law firms, which is exactly the case at the housing clinic.

“We got a judgment [in the underlying case], we cleaned up the hotel, and we received a reasonable amount of money for doing it,” Collier said. “I don’t see any injustice in that.”

Neither did Mellon. His order cites recent case law holding that a law firm that has not registered with the State Bar is not required to refund attorney fees awarded by the court, because the clients did not rely on the lack of a corporate entity when hiring the firm. Olson v. Cohen, 106 Cal.App.4th 1209 (2003)

Similarly, Mellon said THC should not be required to disgorge fees because it had not registered to practice law. The clients asked for and received legal services, he wrote. Licensed THC lawyers won their case. Each plaintiff recovered a substantial sum, and the clinic received a portion of the reward according to their contract.

Zacks believes the THC case, which deals with a nonprofit corporation, is significantly different from Olson, which does not. He said he plans to appeal Mellon’s order.

At issue in the case is a few thousand dollars that the three clients could have received via the court’s fee award. But Zacks thinks the stakes are much higher.

Zacks has another claim pending against the clinic claiming violations of Business and Professions Code Section 17200. If he prevails at the court of appeal, Zacks said, he hopes to force the clinic to disgorge hundreds of thousands of dollars in attorney fees the clinic has collected over the years.