Tenants turn to the Bureau of Building Inspection to start enforcing building codes. 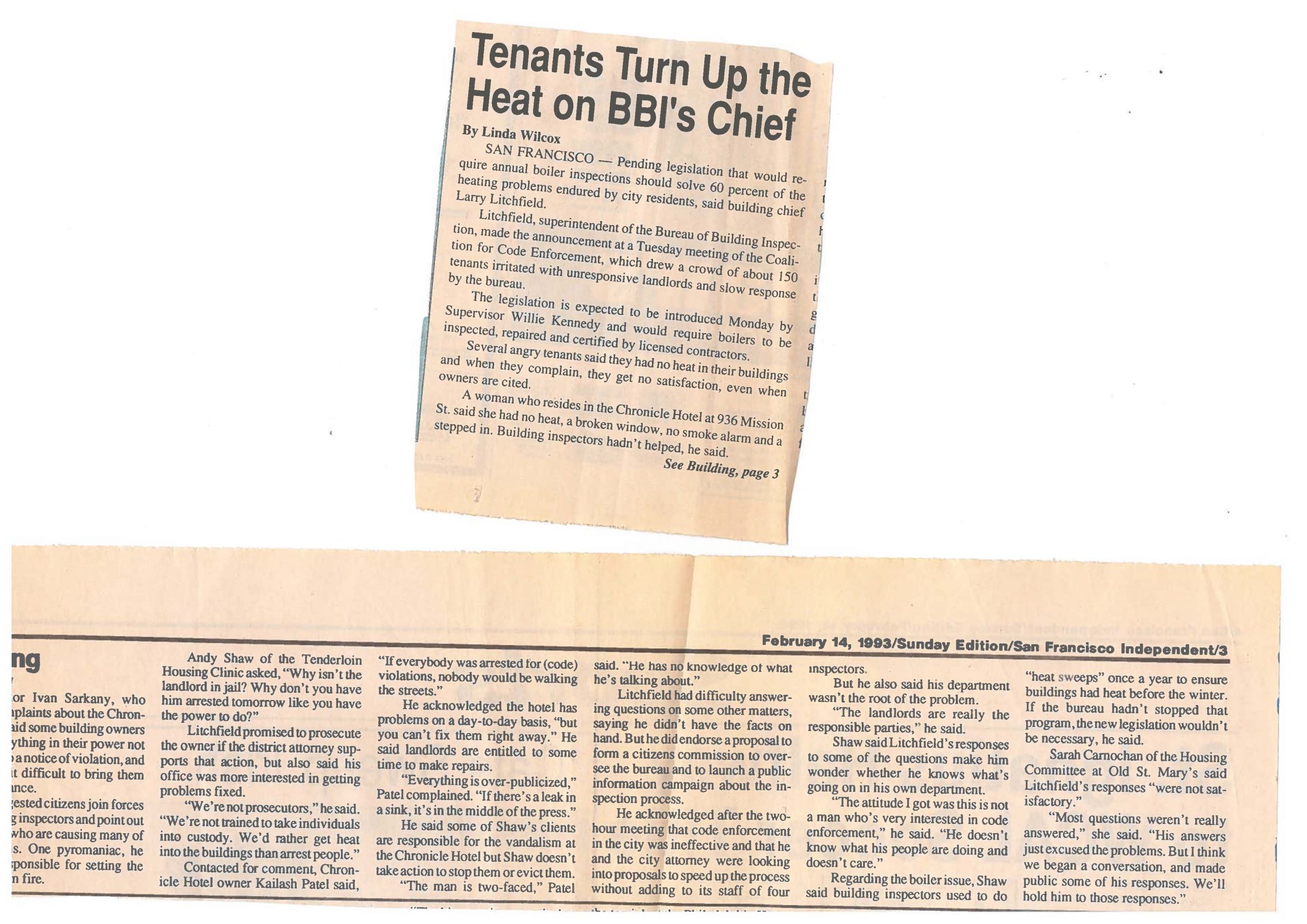 Tenants Turn Up the Heat on BBI’s Chief

Litchfield, superintendent of the Bureau of Building Inspection, made the announcement at a Tuesday meeting of the Coalition for Code Enforcement, which drew a crowd of about 150 tenants irritated with unresponsive landlords and slow response by the bureau.

The legislation is expected to be introduced Monday by Supervisor Willie Kennedy and would require boilers to be inspected, repaired and certified by licensed contractors.

Several angry tenants said they had no heat in their buildings and when they complain, they get no satisfaction, even when owners are cited.

A woman who resides in the Chronicle Hotel at 936 Mission St. said she had no heat, a broken window, no smoke alarm and a stepped in. Building inspectors hadn’t helped, he said.

Inspector Ivan Sarkany, who handles complaints about the Chronicle Hotel, said some building owners will do everything in their power not to respond to a notice of violation, and that makes it difficult to bring them into compliance.

He suggested citizens join forces with building inspectors and point out the vandals who are causing many of the problems. One pyromaniac, he noted, is responsible for setting the bathrooms on fire.

Randy Shaw of the Tenderloin Housing Clinic asked, “Why isn’t the landlord in jail? Why don’t you have him arrested tomorrow like you have the power to do?”

Litchfield promised to prosecute the owner if the district attorney supports that action, but also said his office was more interested in getting problems fixed.

“We’re not prosecutors,” he said. “We’re not trained to take individuals into custody. We’d rather get heat into the buildings than arrest people.”

Contacted for comment, Chronicle Hotel owner Kailasg Patel said, “If everybody was arrested for (code) violations, nobody would be walking the streets.”

He acknowledged the hotel has problems on a day-to-day basis, “but you can’t fix them right away.” He said landlords are entitled to some time to make repairs.

“Everything is over-publicized,” Patel complained. “If there’s a leak in a sink, it’s in the middle of the press.”

He said some of Shaw’s clients are responsible for the vandalism at the Chronicle Hotel but Shaw doesn’t take action to stop them or evict them.

“The man is two-faced,” Patel said. “He has no knowledge of what he’s talking about.”

Litchfield had difficulty answering questions on some other matters, saying he didn’t have the facts on hand. But he did endorse a proposal to form a citizen commission to oversee the bureau and to launch a public information campaign about the inspection process.

He acknowledged after the two-hour meeting that code enforcement in the city attorney were looking into proposals to speed up the process without adding to its staff of four inspectors.

But he also said his department wasn’t the root of the problem.

“The landlords are really the responsible parties,” he said.

Shaw said Litchfield’s responses to some of the questions make him wonder whether he knows what’s going on in his own department.

“The attitude I got was this is not a man who’s very interested in code enforcement,” he said. “He doesn’t know what his people are doing and doesn’t care.”

Regarding the boiler issue, Shaw said building inspectors used to do “heat sweeps” once a year to ensure buildings had heat before the winter. If the bureau hadn’t stopped that program, the new legislation wouldn’t be necessary, he said.

Sarah Carnochan of the Housing Committee at the Old St. Mary’s said Litchfield’s responses “were not satisfactory.”

“Most questions weren’t really answered,” she said. “His answers just excused the problems. But I think we began a conversation, and made public some of his responses. We’ll hold him to those responses.”