Tenants protest lockouts as the frequency of them skyrockets. Tenants and Advocates look to the police to enforce Penal code Section 418, the law forbidding landlords from locking out a tenant. 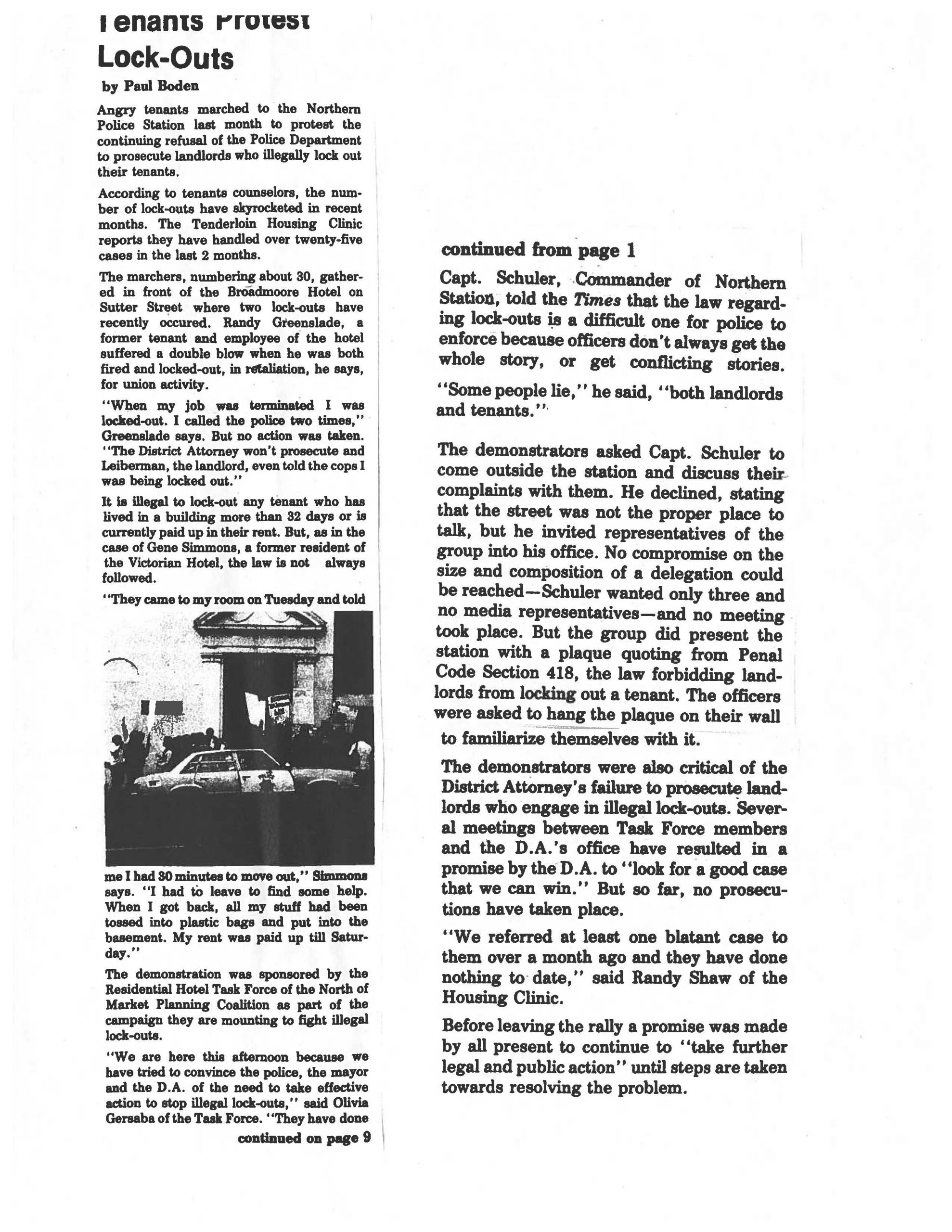 Angry tenants marched to the Northern Police Station last month to protest the continuing refusal of the Police Department to prosecute landlords who illegally lock out their tenants.

According to tenants counselors, the number of lock-outs have skyrocketed in recent months. The Tenderloin Housing Clinic reports they have handled over twenty-five cases in the last 2 months.

The marchers, numbering about 30, gathered in front of the Broadmoor Hotel on Sutter Street where two lock-outs have recently occurred . Randy Greenslade, a former tenant and employee of the hotel suffered a double blow when he was both fired and locked-out, in retaliation, he says, for union activity.

“When my job was terminated I was locked-out. I called the police two times,” Greenslade says. But no action was taken. “The District Attorney won’t prosecute and Leiberman, the landlord, even told the cops I was being locked out.”

It is illegal to lock-out any tenant who has lived in a building more than 32 days or is currently paid up in their rent. But, as in the case of Gene Simmons, a former resident of the Victorian Hotel, the law is not always followed.

“They came to my room on Tuesday and told me I had 30 minutes to move out,” Simmons says. “I had to leave to find some help. When I got back, all my stuff had been tossed into plastic bags and put into the basement. My rent was paid up till Saturday.”

The demonstration was sponsored by the Residential Hotel Task Force of the North of Market Planning Coalition as part of the campaign they are mounting to fight illegal lock-outs.

“We are here this afternoon because we have tried to convince the police, the effective action to stop illegal lock-outs,” said Olivia Gersaba of the Task Force. “They have done” Capt. Schuler, Commander of Northern Station, told the Times that the law regarding lock-outs is a difficult one for police to enforce because officers don’t always get the whole story, or get conflicting stories.

“Some people lie,” he said, “both landlords and tenants.”

The demonstrators asked Capt. Schuler to come outside the station and discuss their complaints with them. He declined, stating that the street was not the proper place to talk, but he invited representatives of the group into his office. No compromise on the size and composition of a delegation could be reached — Schuler wanted only three and no media representatives — and no meeting took place. But the group did present the station with a plaque quoting from Penal code Section 418, the law forbidding landlords from locking out a tenant. The officers were asked to hang the plaque on their wall to familiarize themselves with it.

The demonstrators were also critical of the District Attorney’s failure to prosecute landlords who engage in illegal lock-outs. Several meetings between Task Force members and the D.A.’s office have resulted in a promise by the D.A. to “look for a good case that we can win.” But so far, no prosecutions have taken place.

“We referred to at least one blatant case to them over a month ago and they have done nothing to date,” said Randy Shaw of the Housing Clinic.

Before leaving the rally a promise was made by all present to continue to “take further legal and public action” until steps are taken towards resolving the problem.