Tenants Picket the Shorenstein’s hotel after over two dozen residents are threatened with eviction. 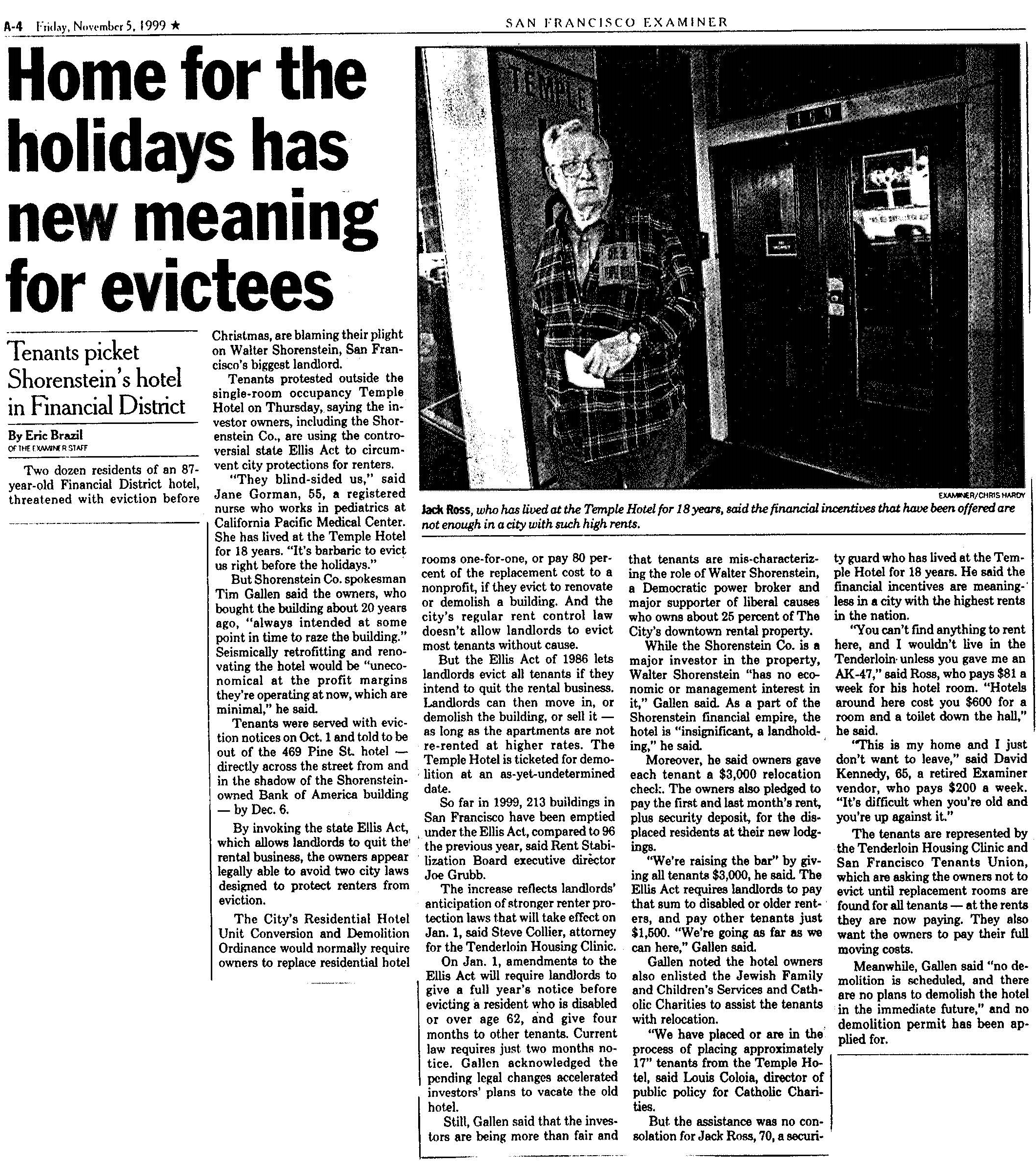 Home for the holidays has new meaning for evictees

Tenants protested outside the single-room occupancy Temple Hotel on Thursday, saying the investor owners, including the Shorenstein Co., are using the controversial state Ellis Act to circumvent city protections for renters.

“They blind-sided us,” said Jane Gorman, 55, a registered nurse who works in pediatrics at California Pacific Medical Center. She has lived at the Temple Hotel for 18 years. “It’s barbaric to evict us right before the holidays.”

But Shorenstein Co. spokesman Tim Gallen said the owners, who bought the building about 20 years ago, “always intended at some point in time to raze the building.”

Seismically retrofitting and renovating the hotel would be “uneconomical at the profit margins they’re operating at now, which are minimal,” he said.

Tenants were served with eviction notices on Oct. 1 and told to be out of the 469 Pine St. hotel — directly across the street from and in the shadow of the Shorenstein- owned Bank of America building — by Dec. 6.

By invoking the state Ellis Act, which allows landlords to quit the rental business, the owners appear legally able to avoid two city laws designed to protect renters from eviction.

The City’s Residential Hotel Unit Conversion and Demolition Ordinance would normally require owners to replace residential hotel rooms one-for-one, or pay 80 percent of the replacement cost to a nonprofit, if they evict to renovate or demolish a building. And the city’s regular rent control law doesn’t allow landlords to evict most tenants without cause.

But the Ellis Act of 1986 lets landlords evict all tenants if they intend to quit the rental business. Landlords can then move in, or demolish the building, or sell it — as long as the apartments are not re-rented at higher rates. The Temple Hotel is ticketed for demolition at an as-yet-undetermined date.

So far in 1999, 213 buildings in San Francisco have been emptied under the Ellis Act, compared to 96 the previous year, said Rent Stabilization Board executive director Joe Grubb.

On Jan. 1, amendments to the Ellis Act will require landlords to give a full year’s notice before evicting a resident who is disabled or over age 62, and give four months to other tenants. Current law requires just two months’ notice. Gallen acknowledges the pending legal changes accelerated investors’ plans to vacate the old hotel.

Still, Gallen said that the investors are being more than fair and that tenants are mis-characterizing the role of Walter Shorenstein, a Democratic power broker and major supporter of liberal causes who owns about 25 percent of The City’s downtown rental property.

While the Shorenstein Co. is a major investor in the property, Walter Shorenstein “ has no economic or management interest in it,” Gallen said. As a part of the Shorenstein financial empire, the hotel is “insignificant, a landholding,” he said.

Moreover, he said owners gave each tenant a $3,000 relocation check. The owners also pledged to pay the first and last month’s rent, plus security deposit, for the displaced residents at their new lodgings.

“We’re raising the bar” by giving all tenants $3,000, he said. The Ellis Act requires landlords to pay that sum to disabled or older renters, and pay other tenants just $1,500. “We’re going as far as we can here,” Gallen said.

Gallen noted the hotel owners also enlisted the Jewish Family and Children’s Services and Catholic Charities to assist the tenants with relocation.

“We have placed approximately 17” tenants from the Temple Hotel, said Louis Coloia, director of public policy for Catholic Charities.

But the assistance was no consolation for Jack Ross, 70, a security guard who has lived at the Temple Hotel for 18 years. He said the financial incentives are meaningless in a city with the highest rents in the nation.

“You can’t find anything to rent here, and I wouldn’t live in the Tenderloin unless you gave me an AK-47,” said Ross, who pays $81 a week for his hotel room. “Hotels around here cost you $600 for a room and a toilet down the hall,” he said.

“It’s difficult when you’re old and you’re up against it.”

The tenants are represented by the Tenderloin Housing Clinic and San Francisco Tenants Union, which are asking the owners not to evict until replacement rooms are found for all tenants — at the rents they are now paying. They also want the owners to pay their full moving costs.

Meanwhile, Gallen said “no demolition is scheduled, and there are no plans to demolish the hotel in the immediate future,” and no demolition permit has been applied for.

Picture: Jack Ross, who has lived at the Temple Hotel for 18 years, said the financial incentives that have been offered are not enough in a city with such high rents.