THC Attorney Tim Lee receives victorious ruling that tenants being evicted under the Ellis Act have the right to show retaliation in court. 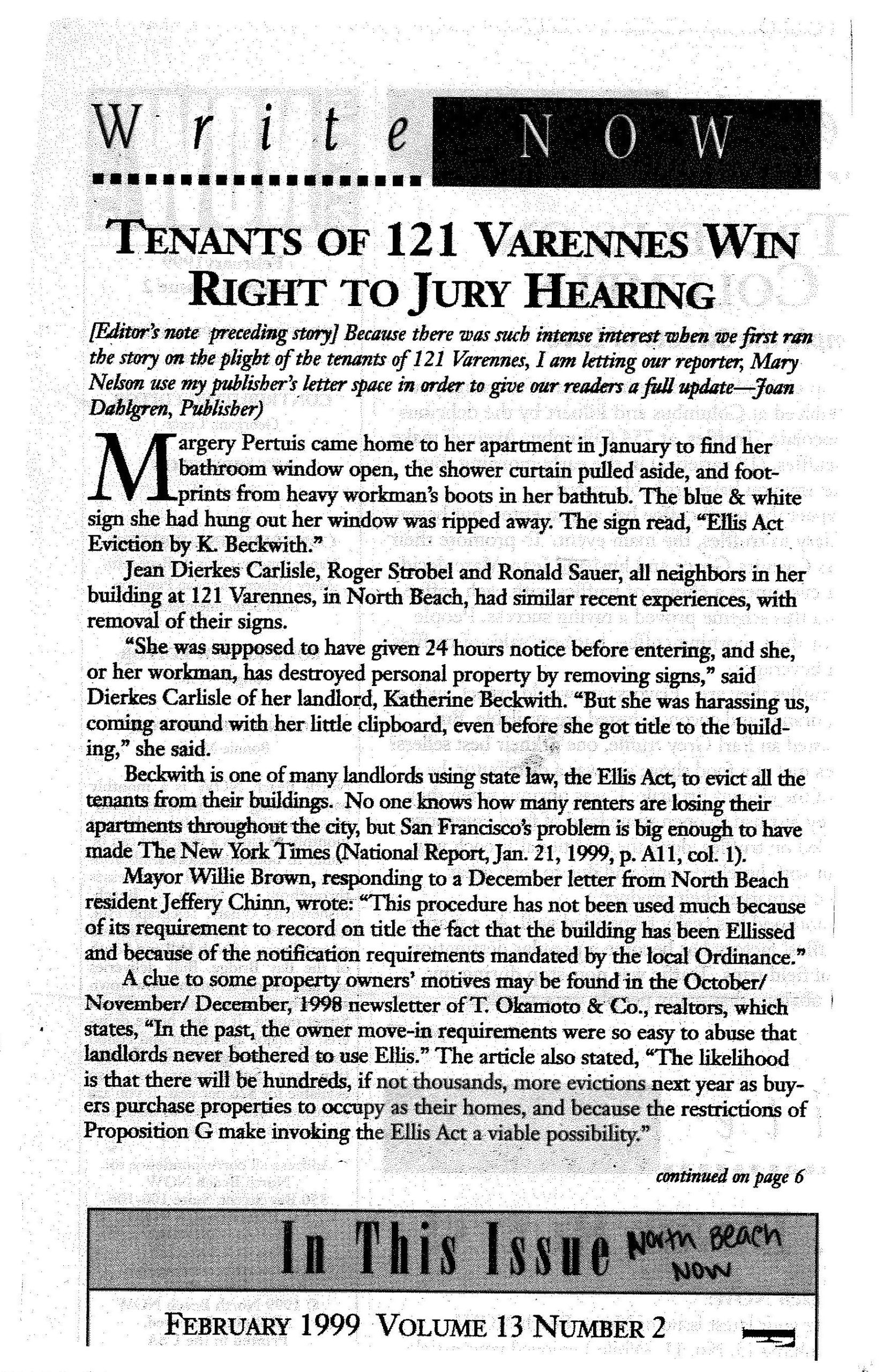 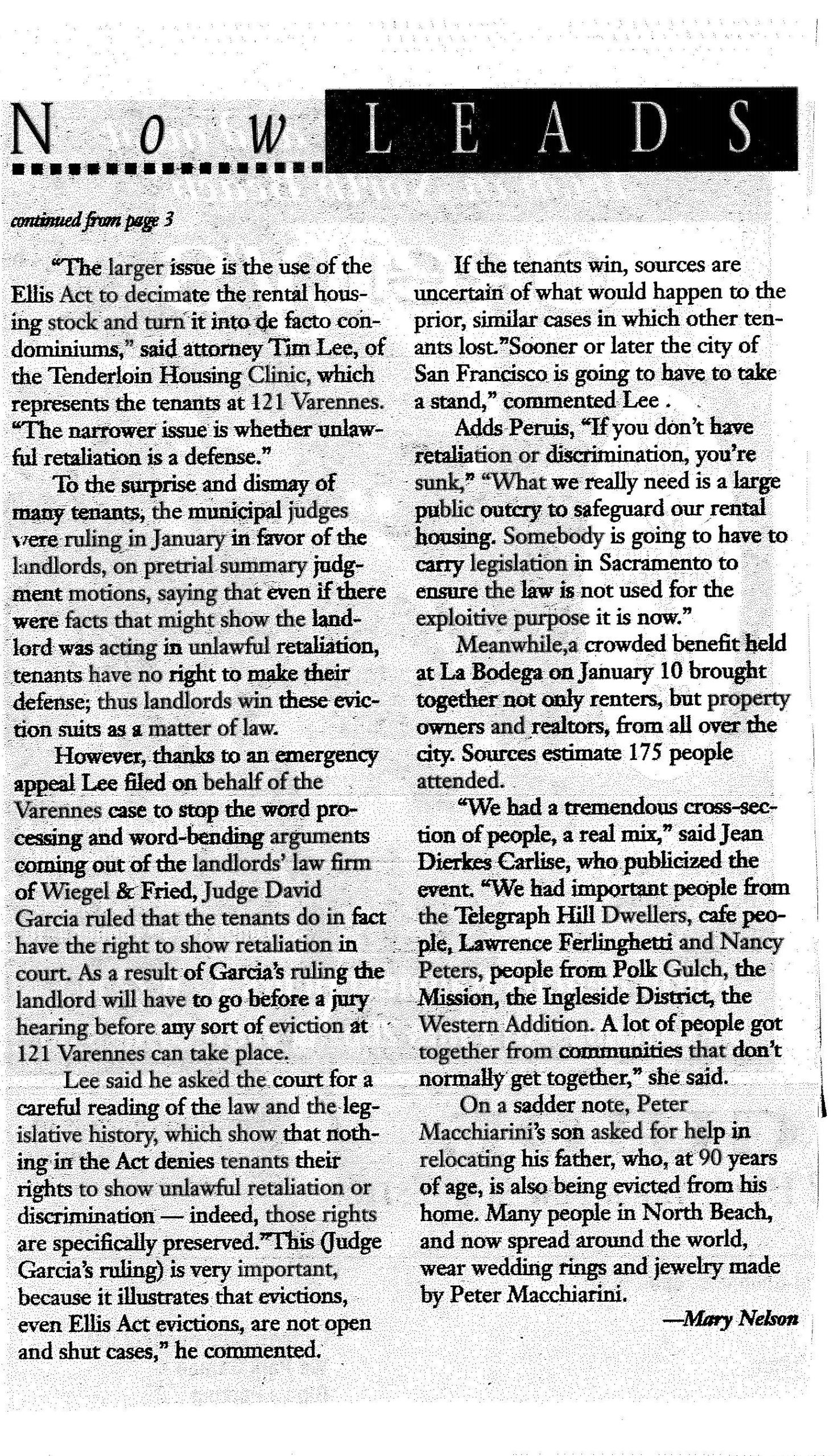 [Editor’s note preceding story] Because there was such intense interest when we first ran the story on the plight of the tenants of 121 Varennes, I am letting our reporter, Mary Nelson, use my publisher’s letter space in order to give our readers a full update–Joan Dahlgren, Publisher)

Margery Pertuis came home to her apartment in January to find her bathroom window open, the shower curtain pulled aside, and footprints from heavy workman’s boots in her bathtub. The blue & white sign she had hung out her window was ripped away. The sign read, “Ellis Act Eviction by K. Beckwith.”

Jean Dierkes Carlisle, Roger Strobel and Ronald Sauer, all neighbors in her building at 121 Varennes, in North Beach, had similar recent experiences, with removal of their signs.

“She was supposed to have given 24 hours notice before entering, and she, or her workman, has destroyed personal property by removing signs,” said Dierkes Carlisle of her landlord, Katherine Beckwith. “But she was harassing us, coming around with her little clipboard, even before she got the title to the building,” she said.

Beckwith is one of many landlords using state law, the Ellis Act, to evict all the tenants from their buildings. No one knows how many renters are losing their apartments throughout the city, but San Francisco’s problem is big enough to have made The New York Times (National Report, Jan. 21, 1999, p. A11, col. 1).

Mayor Willie Brown, responding to a December letter from North Beach resident Jeffery Chinn, wrote: “This procedure has not been used much because of its requirement to record on title the fact that the building has been Ellissed and because of the notification requirements mandated by the local Ordinance.”

A clue to some property owners’ motives may be found in the October/ November/ December, 1998 newsletter of T. Okamoto & Co., realtors, which states, “In the past, the owner move-in requirements were so easy to abuse that landlords never bothered to use Ellis.” The article also stated, “The likelihood is that there will be hundreds, if not thousands, more evictions next year as buyers purchase properties to occupy as their homes, and because the restrictions of Proposition G make invoking the Ellis Act a viable possibility.”

“The larger issue is the use of the Ellis Act to decimate the rental housing stock and turn it into de facto condominiums,” said attorney Tim Lee, of the Tenderloin Housing Clinic, which represents the tenants at 121 Varennes. “The narrower issue is whether unlawful retaliation is a defense.”

To the surprise and dismay of many tenants, the municipal judges were ruling in January in favor of the landlords, on pretrial summary judgment motions, saying that even if there were facts that might show the landlord was acting in unlawful retaliation, tenants have no right to make their defense; thus landlords win these eviction suits as a matter of law.

However, thanks to an emergency appeal Lee filed on behalf of the Varennes case to stop the word processing and word-bending arguments coming out of the landlords’ law firm of Wiegel & Fried, Judge David Garcia ruled that the tenants do in fact have the right to show retaliation in court. As a result of Garcia’s ruling the landlord will have to go before a jury hearing before any sort of eviction at 121 Varennes can take place.

Lee said he asked the court for a careful reading of the law and the legislative history, which show that nothing in the Act denies tenants their rights to show unlawful retaliation or discrimination — indeed, those rights are specifically preserved. This (Judge Garcia’s ruling) is very important, because it illustrates that evictions, even Ellis Act evictions, are not open and shut cases,” he commented.

If the tenants win, sources are uncertain of what would happen to the prior, similar cases in which other tenants lost. “Sooner or later the city of San Francisco is going to have to take a stand,” commented Lee.

Adds Peruis, “If you don’t have retaliation or discrimination, you’re sunk,” “What we really need is a large public outcry to safeguard our rental housing. Somebody is going to have to carry legislation in Sacramento to ensure the law is not used for the exploitive purpose it is now.”

Meanwhile, a crowded benefit held at La Bodega on January 10 brought together not only renters, but property owners and realtors, from all over the city. Sources estimate 175 people attended.

“We had a tremendous cross-section of people, a real mix,” said Jean Dierkes Carlise, who publicized the event. “We had important people from the Telegraph Hill Dwellers, cafe people, Lawrence Ferlinghetti and Nancy Peters, people from Polk Gulch, the Mission, the Ingleside District, the Western Addition. A lot of people got together from communities that don’t normally get together,” she said. On a sadder note, Peter Macchiarini’s son asked for help in relocating his father, who, at 90 years of age, is also being evicted from his home. Many people in North Beach, and now spread around the world, wear wedding rings and jewelry made by Peter Macchiarini.