Tenants may no longer use , the retaliatory eviction defense to combat eliis act evictions. 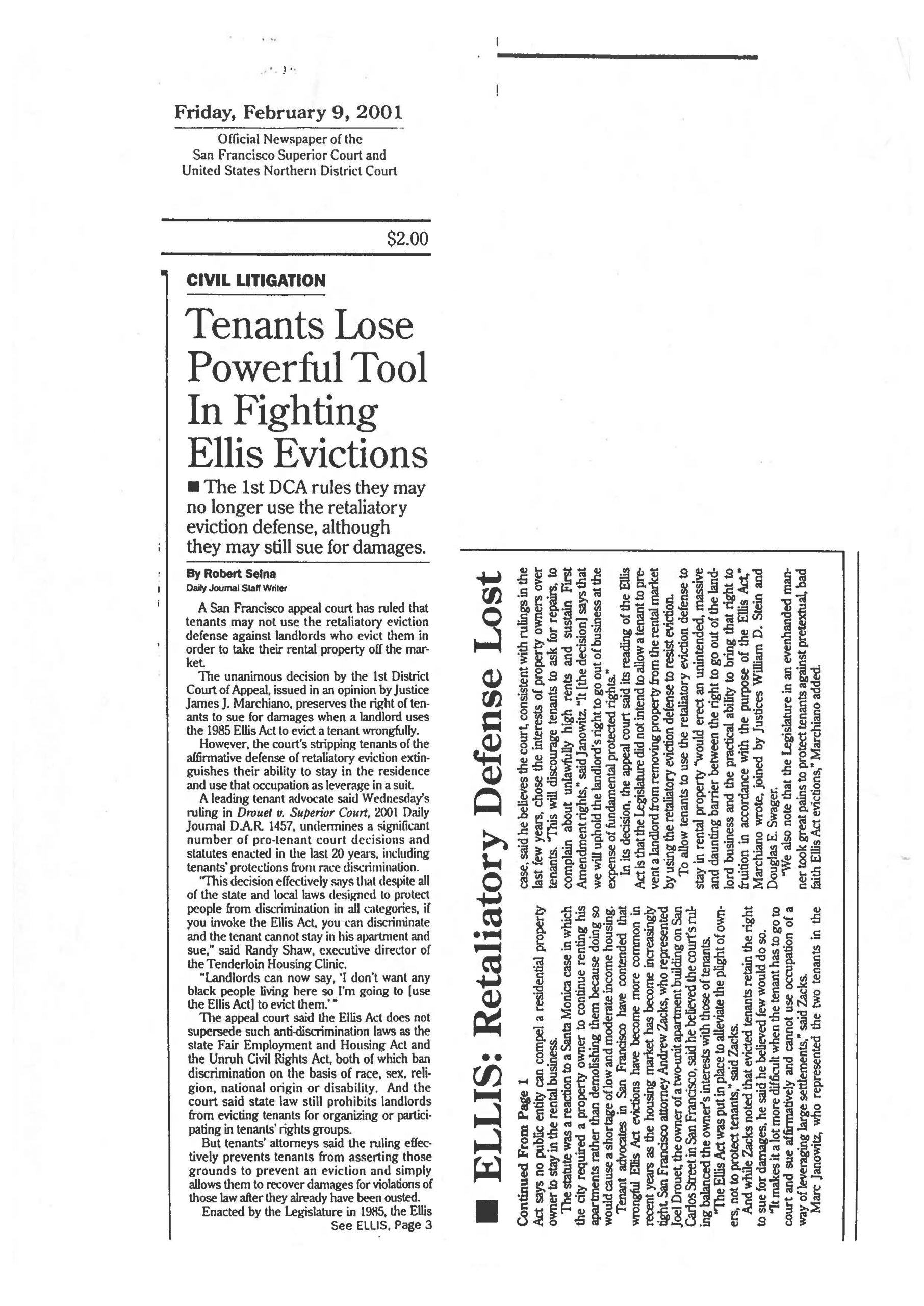 –The 1st DCA rules they may no longer use the retaliatory eviction defense, although they may still sue for damages.

A San Francisco appeal court has ruled that tenants may not use the retaliatory eviction defense against landlords who evict them in order to take their rental property off the market.

The unanimous decision by the 1st District Court of Appeal, issued in an opinion by Justice James J. Marchiano, preserves the right of tenants to sue for damages when a landlord uses the 1985 Ellis Act to evict a tenant wrongfully.

However, the court’s stripping tenants of the affirmative defense of retaliatory eviction extinguishes their ability to stay in the residence and use that occupation as leverage in a suit.

“This decision effectively says that despite all of the state and local laws designed to protect people from discrimination in all categories, if you invoke the Ellis Act, you can discriminate and the tenant cannot stay in his apartment and sue,” said Randy Shaw, executive director of the Tenderloin Housing Clinic.

“Landlords can now say, ‘I don’t want any black people living here so I’m going to [use the Ellis Act] to evict them.’”

The appeal court said the Ellis Act does not supersede such anti-discrimination laws as the state Fair Employment and Housing Act and the Civil Rights Act, both of which ban discrimination on the basis of race, sex, religion, national origin or disability. And the court said state law still prohibits landlords from evicting tenants for organizing or participating in tenants’ rights groups.

But tenants’ attorneys said the ruling effectively prevents tenants from asserting those grounds to prevent an eviction and simply allows them to recover damages for violations of those law after they already have been ousted.

Enacted by the Legislature in 1989, the Ellis Act says in the rental business.

The statute was a reaction to a Santa Monica case in which the city required a property owner to continue renting his apartments rather than demolishing them because doing so would cause a shortage of low and moderate income housing.

Tenant advocates in San Francisco have contended that wrongful Ellis Act evictions have become more common in recent years as the housing market has become increasingly tight. San Francisco attorney Andrew Zacks, who represented Joel Drouet, the owner of a two-unit apartment building on San Carlos Street in San Francisco, said he believed the court’s ruling balanced the owner’s interests with those of tenants.

“The Ellis Act was put in place to alleviate the plight of owners, not to protect tenants,” said Zacks.

And while Zacks noted that evicted tenants retain the right to sue for damages, he said he believed few would do so.

“It makes it a lot more difficult when the tenant has to go to court and sue affirmatively and cannot use occupation of a way of leveraging large settlements,” said Zacks.

Marc Janowitz, who represented the two tenants in the case, said he believes the court, consistent with rulings in the last few years, chose the interests of property owners over tenants. “This will discourage tenants to ask for repairs, to complain about unlawfully high rents and sustain First Amendment rights,” said Janowitz. “It [the decision] says that we will uphold the landlord’s right to go out of business at the expense of fundamental protected rights.”

In its decision, the appeal court said its reading of the Ellis Act is that the Legislature did not intend to allow a tenant to prevent a landlord from removing property from the rental market by using the retaliatory eviction defense to resist eviction.

To allow tenants to use the retaliatory eviction defense to stay in rental property “would erect an unintended, massive and daunting barrier between the right to go out of the landlord business and the practical ability to bring that right to fruition in accordance with the purpose of the Ellis Act,” Marchiano wrote, joined by Justices William D. Stein and Douglas E. Swager.

“We also note that the Legislature in an even handed manner took great pains to protect tenants against pretextual, bad faith Ellis Act evictions,” Marchiano added.