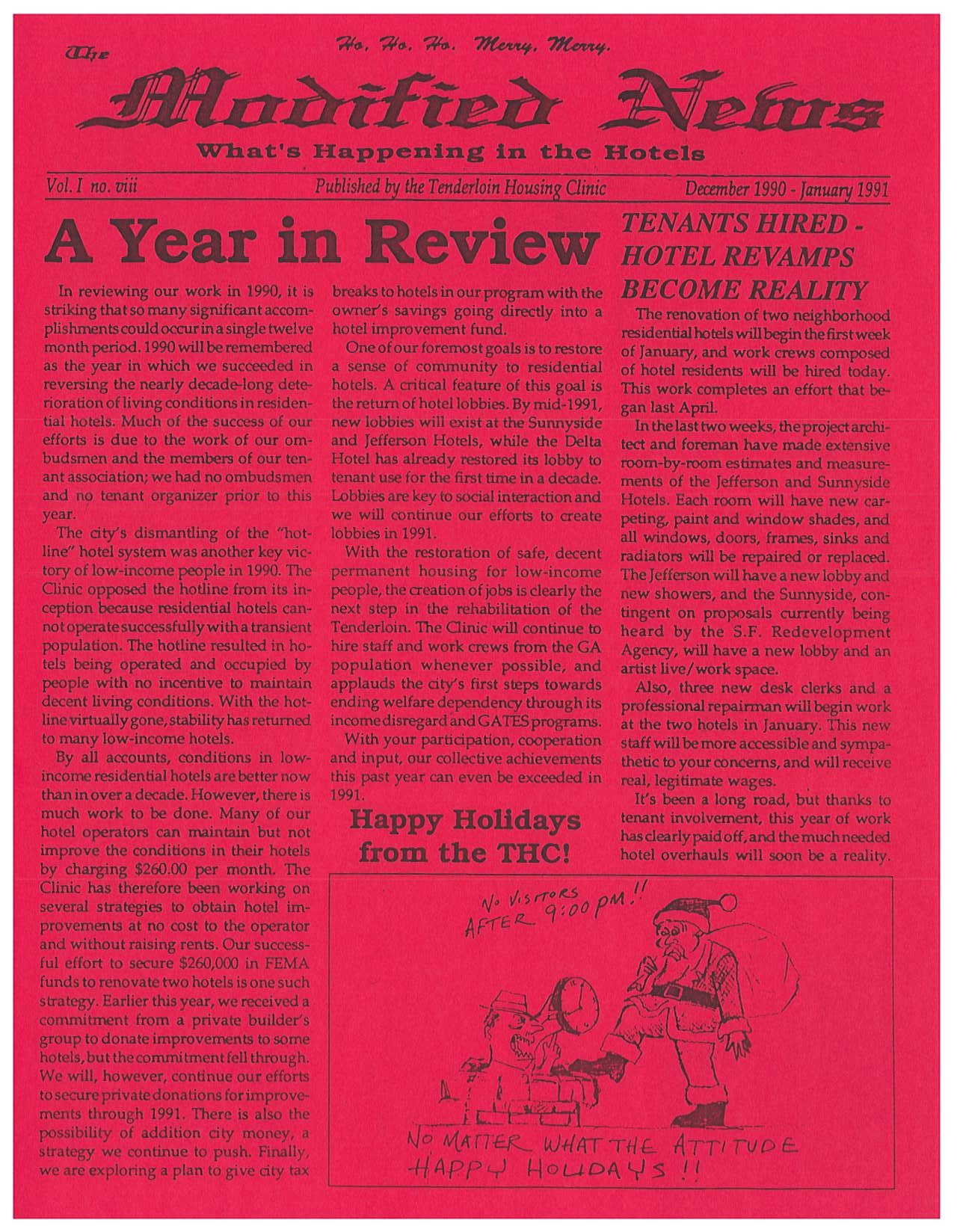 A Year in Review

In reviewing our work in 1990, it is striking that so many significant accomplishments could occur in a single twelve month period. 1990 will be remembered as the year in which we succeeded in reversing the nearly decade-long deterioration of living conditions in residential hotels. Much of the success of our efforts is due to the work of our ombudsmen and the members of our tenant association; we had no ombudsman and no tenant organizer prior to this year.

The city’s dismantling of the “hotline” hotel system was another key victory of low-income people in 1990. The Clinic opposed the hotline from its inception because residential hotels can not operate successfully with a transient population. The hotline resulted in hotels being operated and occupied by people with no incentive to maintain decent living conditions. With the hotline virtually gone, stability has returned to many low-income hotels.

By all accounts, conditions in low-income residential hotels are better now than in over a decade. However , there is much work to be done. Many of our hotel operators can maintain but not improve the conditions in their hotels by charging $260.00 per month. The Clinic has therefore been working on several strategies to obtain hotel improvements at no cost to the operator and without raising rents. Our successful effort to secure $260,000 in FEMA funds to renovate two hotels is one such strategy. Earlier this year, we received a commitment from a private builder’s group to donate improvements to some hotels, but the commitment fell through. We will, however, continue our efforts to secure private donations for improvements through 1991. There is also the possibility of additional city money, a strategy we continue to push. Finally, we are exploring a plan to give city tax breaks to hotels in our program with the owner’s savings going directly into a hotel improvement fund.

One of our foremost goals is to restore a sense of community to residential hotels. A critical feature of this goal is the return of hotel lobbies. By mid-1992, new lobbies will exist at the Sunnyside and Jefferson Hotels, while the Delta Hotel has already restored its lobby to tenant use for the first time in a decade. Lobbies are key to social interaction and we will continue our efforts to create lobbies in 1991.

With the restoration of safe, decent permanent housing for low-income people, the creation of jobs is clearly the next step in the rehabilitation of the Tenderloin. The Clinic will continue to hire staff and work crews from the GA population whenever possible, and applauds the city’s first steps towards ending welfare dependency through its income disregard and GATES programs.

With your participation, cooperation and input, our collective achievements this past year can even be exceeded in 1991.

The renovation of two neighborhood residential hotels will begin the first week of January, and work crews composed of hotel residents will be hired today. This work completes an effort that began last April.

In the last two weeks, the project architect and foreman have made extensive room-by-room estimates and measurements of the Jefferson and Sunnyside Hotels each room will have new carpeting, paint and window shades, and all windows, doors, frames, sinks and radiators will be repaired or replaced. The Jefferson will have a new lobby and new showers, and the Sunnyside, contingent on proposals currently being heard by the S.F. Redevelopment Agency, will have a new lobby and an artist live/ work space.

Also, three new desk clerks and a professional repairman will begin work at the two hotels in January. This new staff will be more accessible and sympathetic to your concerns, and will receive real, legitimate wages.

It’s been a long road, but thanks to tenant involvement, this year of work has clearly paid off, and much needed hotel overhauls will soon be a reality.