Civic Center Hotel tenants demand its brought to code. The United Association of Plumbers, Pipefitters and Journeymen Local 38 say they are to demolish the building. 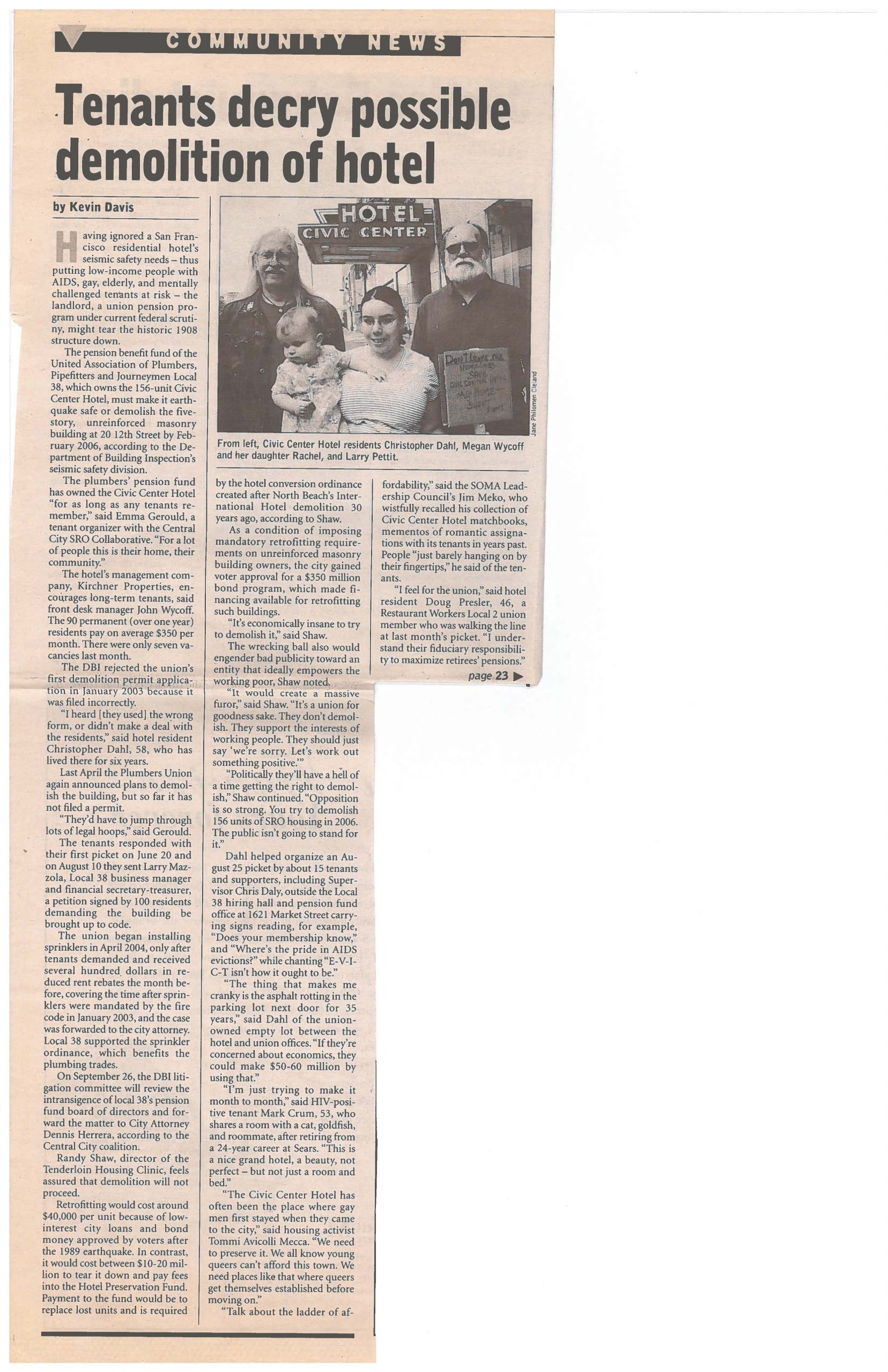 The pension benefit fund of the United Association of Plumbers, Pipefitters and Journeymen Local 38, which owns the 156-unit Civic Center Hotel, must make it earthquake safe or demolish the fivestory, unreinforced masonry building at 20 12th Street by February 2006, according to the Department of Building Inspection’s seismic safety division.

The plumbers’ pension fund has owned the Civic Center Hotel “for as long as any tenants remember,” said Emma Gerould, a tenant organizer with the Central City SRO Collaborative. “For a lot of people this is their home, their community.”

The DBI rejected the union’s first demolition permit application in January 2003 because it was filed incorrectly.

“I heard they used the wrong form, or didn’t make a deal with the residents,” said hotel resident Christopher Dahl, 58, who has lived there for six years.

Last April the Plumbers Union again announced plans to demolish the building, but so far it has not filed a permit. | “They’d have to jump through lots of legal hoops,” said Gerould.

The tenants responded with their first picket on June 20 and on August 10 they sent Larry Mazzola, Local 38 business manager and financial secretary-treasurer, a petition signed by 100 residents demanding the building be brought up to code.

The union began installing sprinklers in April 2004, only after tenants demanded and received several hundred dollars in reduced rent rebates the month before, covering the time after sprinklers were mandated by the fire code in January 2003, and the case was forwarded to the city attorney. Local 38 supported the sprinkler ordinance, which benefits the plumbing trades.

On September 26, the DBI litigation committee will review the intransigence of local 38’s pension fund board of directors and forward the matter to City Attorney Dennis Herrera, according to the Central City coalition.

Randy Shaw, director of the Tenderloin Housing Clinic, feels assured that demolition will not proceed.

Retrofitting would cost around $40,000 per unit because of low interest city loans and bond money approved by voters after the 1989 earthquake. In contrast, it would cost between $10-20 million to tear it down and pay fees into the Hotel Preservation Fund. Payment to the fund would be to replace lost units and is required by the hotel conversion ordinance created after North Beach’s International Hotel demolition 30 years ago, according to Shaw.

As a condition of imposing mandatory retrofitting requirements on unreinforced masonry building owners, the city gained voter approval for a $350 million bond program, which made financing available for retrofitting such buildings.

“It’s economically insane to try to demolish it,” said Shaw.

The wrecking ball also would engender bad publicity toward an entity that ideally empowers the working poor, Shaw noted,

“It would create a massive furor,” said Shaw. “It’s a union for goodness sake. They don’t demolish. They support the interests of working people. They should just say ‘we’re sorry. Let’s work out something positive.”

“Politically they’ll have a hell of a time getting the right to demolish,” Shaw continued. “Opposition is so strong. You try to demolish 156 units of SRO housing in 2006. The public isn’t going to stand for it.”

Dahl helped organize an August 25 picket by about 15 tenants and supporters, including Supervisor Chris Daly, outside the Local 38 hiring hall and pension fund office at 1621 Market Street carrying signs reading, for example, “Does your membership know,” and “Where’s the pride in AIDS evictions?” while chanting “E-V-I-C-T isn’t how it ought to be.”

“The thing that makes me cranky is the asphalt rotting in the parking lot next door for 35 years,” said Dahl of the union-owned empty lot between the hotel and union offices. “If they’re concerned about economics, they could make $50-60 million by using that.”

“I’m just trying to make it month to month,” said HIV-positive tenant Mark Crum, 53, who shares a room with a cat, goldfish, and roommate, after retiring from a 24-year career at Sears. “This is a nice grand hotel, a beauty, not perfect – but not just a room and bed.

“The Civic Center Hotel has often been the place where gay men first stayed when they came to the city,” said housing activist Tommi Avicolli Mecca. “We need to preserve it. We all know young queers can’t afford this town. We need places like that where queers get themselves established before moving on.”

“Talk about the ladder of affordability,” said the SOMA Leadership Council’s Jim Meko, who wistfully recalled his collection of Civic Center Hotel matchbooks, mementos of romantic assignations with its tenants in years past. People “just barely hanging on by their fingertips,” he said of the tenants.

“I feel for the union,” said hotel resident Doug Presler, 46, a Restaurant Workers Local 2 union member who was walking the line at last month’s picket. “I understand their fiduciary responsibility to maximize retirees’ pensions.”