Seniors are at risk again for eviction after the moratorium on move-in evictions for seniors is lifted. Supporters of the anti-eviction law vow to appeal the decision. 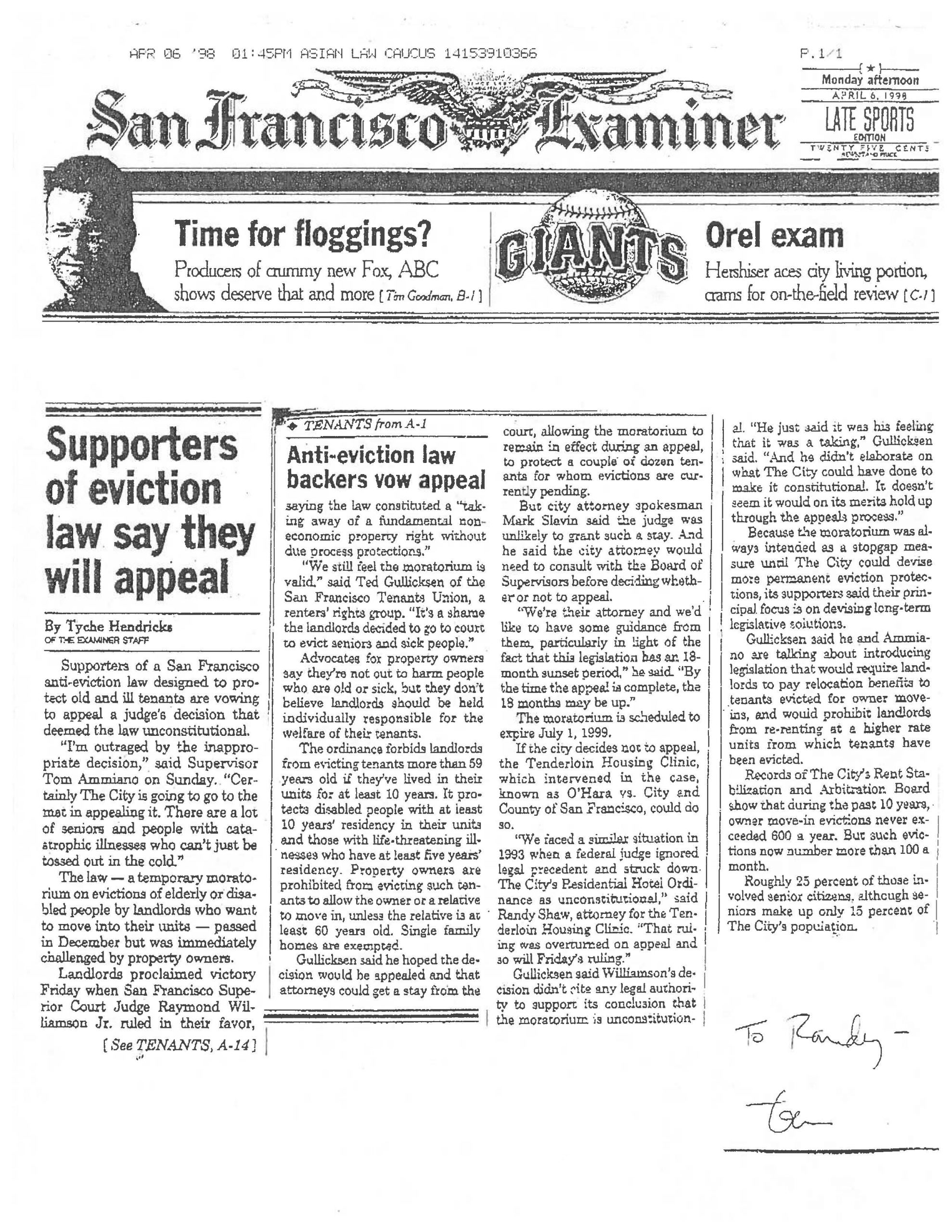 Supporters of Eviction Law Say They Will Appeal

Supporters of a San Francisco anti-eviction law designed to protect old and ill tenants are vowing to appeal a judge’s decision that deemed the law unconstitutional.

“I’m outraged by the inappropriate decision,” said Supervisor Tom Ammiano on Sunday. “Certainly The City is going to go to the mat in appealing it. There are a lot of seniors and people with catastrophic illnesses who can’t just be tossed out in the cold.”

The law — a temporary moratorium on evictions of elderly or disabled people by landlords who want to move into their units — passed in December but was immediately challenged by property owners.

“We still feel the moratorium is valid,” said Ted Gullicksen of the San Francisco Tenants Union, a renters’ rights group. “It’s a shame the landlords decided to go to court to evict seniors and sick people.”

Advocates fox property owners say they’re not out to harm people who are old or sick, but they don’t believe landlords should be held individually responsible for the welfare of their tenants.

The ordinance forbids landlords from evicting tenants more than 59 years old if they’ve lived in their units for at least 10 years’ residency in their units and those with life threatening illnesses who have at least five years’ residency. Property owners are prohibited from evicting such tenants to allow the owner or a relative to move in, unless the relative is at least 60 years old. Single family homes are exempted.

Gullicksen said he hoped the decision would be appealed and that attorneys could get a stay from the court, allowing the moratorium to remain in effect during an appeal, to protect a couple of dozen tenants for whom evictions are currently pending.

But city attorney spokesman Mark Slavin said the judge was unlikely to grant such a stay. And he said the city attorney would need to consult with the Board of Supervisors before deciding whether or not to appeal.

“We’re their attorneys and we’d like to have some guidance from them, particularly in light of the fact that this legislation has an 18-month sunset period,” he said. “By the time the appeal is complete, the 18 months may be up.”

The moratorium is scheduled to expire July 1, 1999.

If the city decides not to appeal, the Tenderloin Housing Clinic, which intervened in the case, known as O’Hara vs. City and County of San Francisco, could do so.

“We faced a similar situation in 1993 when a federal judge ignored legal precedent and struck down The City’s Presidential Hotel Ordinance as unconstitutional,” said Randy Shaw, attorney for the Tenderloin Housing Clinic. “That ruling was overturned on appeal and so will Friday’s ruling.”

Gullicksen said Williamson’s decision didn’t cite any legal authority to support its conclusion that the moratorium is unconstitutional. “He just said it was his feeling that it was taking,” Gullicksen said. “And he didn’t elaborate on what The City could have done to make it constitutional. It doesn’t seem it would on its merits hold up through the appeals process.”

Because the moratorium was always intended as a stopgap measure until The City could devise more permanent eviction protections, its supporters said their principal focus is on devising long-term legislative solutions.

Gullicksen said he and Ammiano are talking about introducing legislation that would require landlords to pay relocation benefits to tenants evicted for owner move-ins, and would prohibit landlords from re-renting at a higher rate units from which tenants have been evicted.

Records of The City’s Rent Stabilization and Arbitration Board show that during the past 10 years, owner move-in evictions never exceeded 600 a year. But such evictions now number more than 100 a month.

Roughly 25 percent of those involved senior citizens although seniors make up only 15 percent of The City’s population.