Legislation is introduced that aims at stopping rental laws from being misused, which causes residents and seniors to be evicted from their homes. 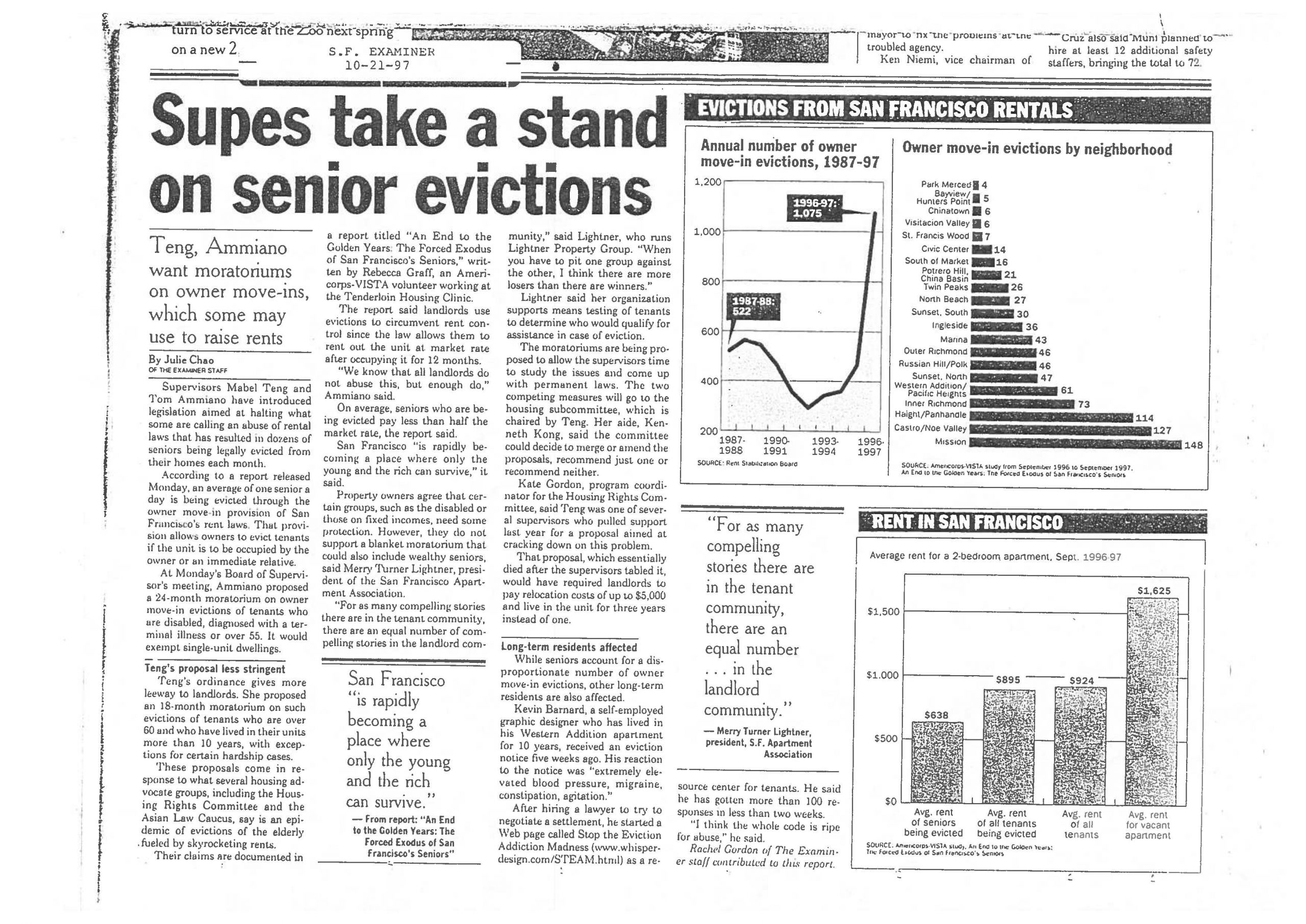 Supervisors Mabel Teng and Tom Ammiano have introduced legislation aimed at halting what some are calling an abuse of rental laws that has resulted in dozens of seniors being legally evicted from their homes each month.

According to a report released Monday, an average of one senior a day is being evicted through the owner move-in provision of San Francisco’s rent laws. That provision allows owners to evict tenants if the unit is to be occupied by the owner or an immediate relative.

At Monday’s Board of Supervisors meeting, Ammiano proposed a 24-month moratorium on owner move-in evictions of tenants who are disabled, diagnosed with a terminal illness or over 55. It would exempt single-unit dwellings.

Teng’s ordinance gives more leeway to landlords. She proposed an 18-month moratorium on such evictions of tenants who are over 60 and who have lived in their units more than 10 years, with exceptions for certain hardship cases.

These proposals come in response to what several housing advocate groups, including the Housing Rights Committee and the Asian Law Caucus, say is an epidemic of evictions of the elderly fueled by skyrocketing rents.

Their claims are documented in a report titled “An End to the Golden Years. The Forced Exodus of San Francisco’s Seniors,” written by Rebecca Graff, an Americorps-VISTA volunteer working at the Tenderloin Housing Clinic.

The report said landlords use evictions to circumvent rent control since the law allows them to rent out the unit at market rate after occupying it for 12 months.

“We know that all landlords do not abuse this, but enough do,” Ammiano said.

On average, seniors who are being evicted pay less than half the market rate, the report said.

San Francisco “is rapidly be- coming a place where only the young and the rich can survive,” it said.

Property owners agree that certain groups, such as the disabled or those on fixed incomes, need some protection. However, they do not support a blanket moratorium that could also include wealthy seniors, said Merry Turner Lightner, president of the San Francisco Apartment Association.

Lightner said her organization supports means testing of tenants to determine who would qualify for assistance in case of eviction.

The moratoriums are being proposed to allow the supervisors time to study the issues and come up with permanent laws. The two competing measures will go to the housing subcommittee, which is chaired by Teng. Her aide, Kenneth Kong, said the committee could decide to merge or amend the proposals, recommend just one or recommend neither.

Kate Gordon, program coordinator for the Housing Rights Committee, said Teng was one of several supervisors who pulled support last year for a proposal aimed at cracking down on this problem.

That proposal, which essentially died after the supervisors tabled it, would have required landlords to pay relocation costs of up to $5,000 and live in the unit for three years instead of one.

While seniors account for a disproportionate number of owner move-in evictions, other long-term residents are also affected.

Kevin Barnard, a self-employed graphic designer who has lived in his Western Addition apartment for 10 years, received an eviction notice five weeks ago. His reaction to the notice was “extremely elevated blood pressure, migraine, constipation, agitation.”

After hiring a lawyer to try to negotiate a settlement, he started a Web page called Stop the Eviction Addiction Madness (www.whisper design.com/STEAM.html) as a resource center for tenants. He said he has gotten more than 100 responses in less than two weeks.

“I think the whole code is ripe for abuse,” he said.

Rachel Gordon of The Examiner staff contributed to this report.