Restriction of owner move-in evictions is passed protecting many elderly and disabled people. 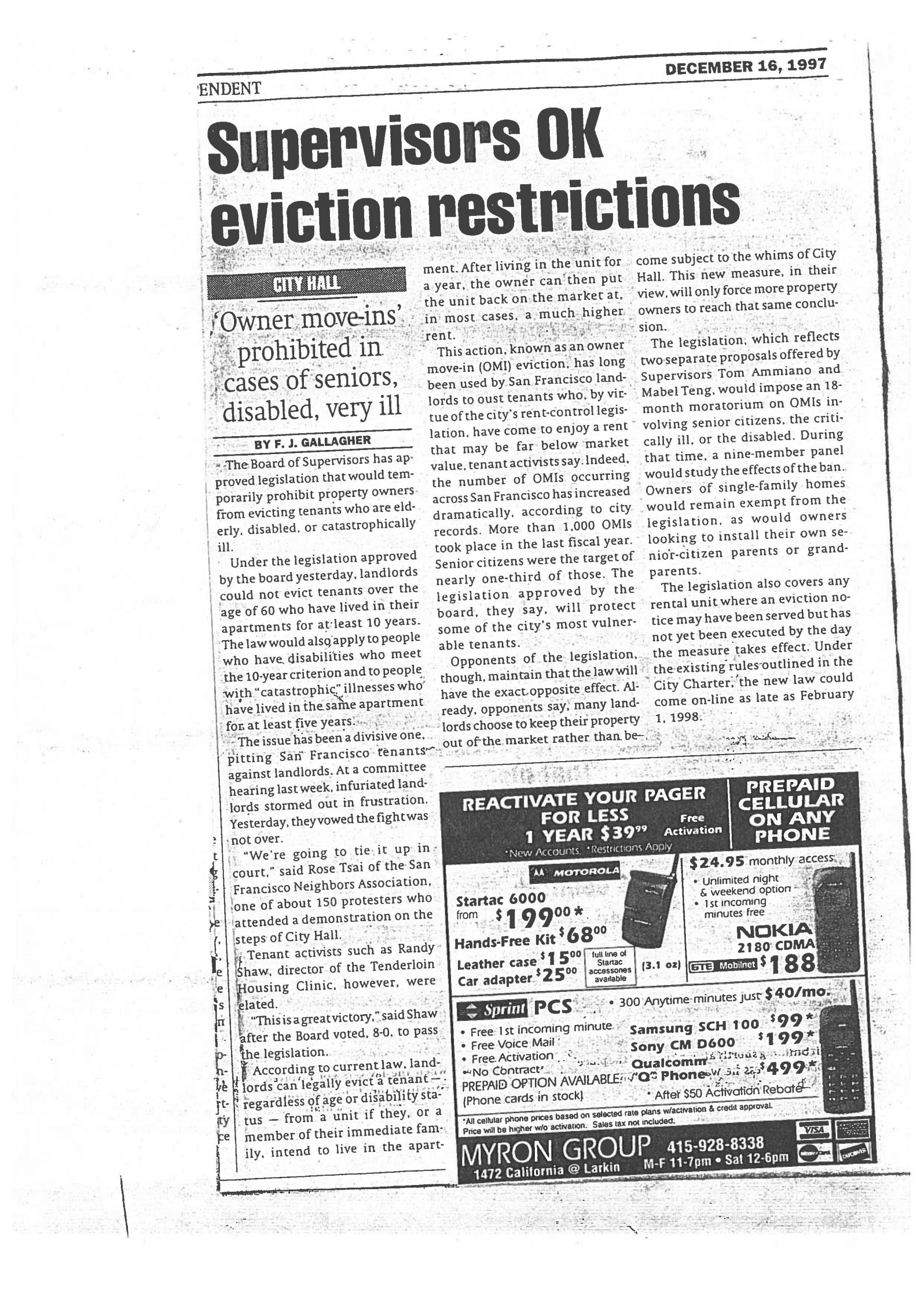 The Board of Supervisors has approved legislation that would temporarily prohibit property owners from evicting tenants who are elderly, disabled, or catastrophically ill.

The issue has been a divisive one, putting San Francisco tenants against landlords. At a committee hearing last week, infuriated landlords stormed out in frustration. Yesterday, they vowed the gint was not over.

“We’re going to tie it up in court,” said Rose Tsai of the San Francisco Neighbors Association, one of about 150 protesters who attended a demonstration on the steps of City Hall.

Tenant activists such as Randy Shaw, director of the Tenderloin Housing Clinic, however, were elated.

“This is a great victory,” said Shaw after the Board voted, 8-0, to pass the legislation.

According to current law, landlords can legally evict a tenant — regardless of age or disability status — from a unit if they, or a member of their immediate family, intend  to live in the apartment. After living in the unit for a year, the owner can then put the unit back on the market at, in most cases, a much higher rent.

This action, known as an owner move-in (OMI) eviction, has long been used by San Francisco landlords to oust tenants who, by virtue of the city’s rent-control legislation, have been far below market value, tenant activists say. Indeed, the number of OMIs occurring across San Francisco has increased dramatically, according to city records. More than 1,000 OMIs took place in the last fiscal year. Senior citizens were the target of nearly one-third of those. The legislation approved by the board, they say, will protect some of the city’s most vulnerable tenants.

Opponents of the legislation, though, maintain that the law will have the exact opposite effect. Already, opponents say, many landlords choose to keep their property out of the market rather than become subject to the whims of City Hall. This new measure, in their view, will only force more property owners to reach that same conclusion.

The legislation ,which reflects two separate proposals offered by Supervisors Tom Ammiano and Mabel Teng, would impose an 18-month moratorium on OMIs involving senior citizens, the critically ill, or the disabled. During that time, a nine-member panel would study the effects of the ban. Owners of single-family homes would remain exempt from the legislation, as would owners looking to install their own senior-citizen parents or grandparents.

The legislation also covers any rental unit where an eviction notice may have been served but has not yet been executed by the day the measure takes effect. Under the existing rules outlined in the City Charter, the new law could come on-line as late as february 1, 1998.