Readers are urged to call Supervisors in opposition of Mayor Jordan’s “direct rent” program, which was essentially a resurgence of the “hot-line hotel” program. 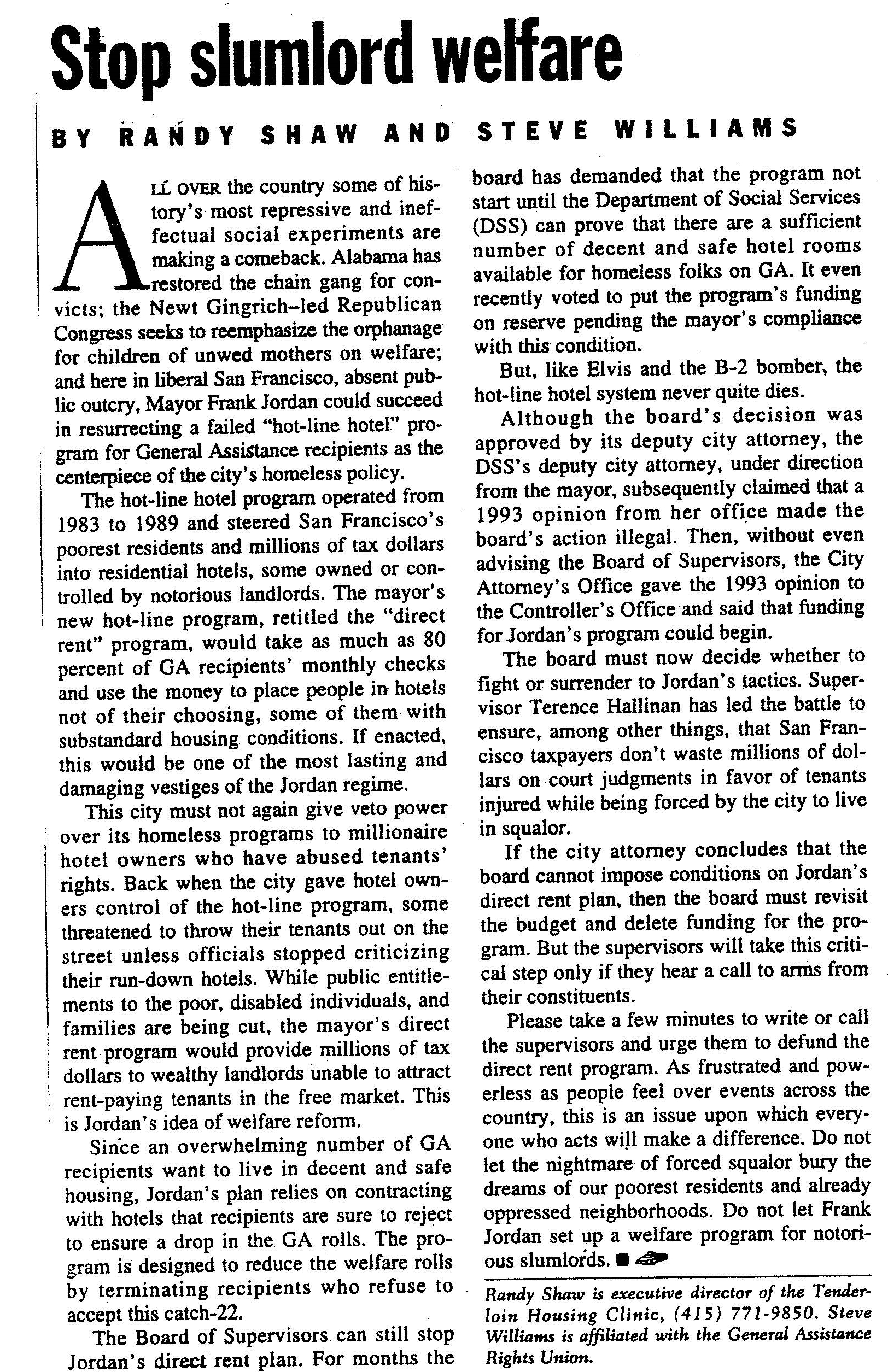 All over the country some of history’s most repressive and ineffectual social experiments are making a comeback. Alabama has restored the chain gang for convicts; the Newt Gingrich-led Republican Congress seeks to re-emphasize the orphanage for children of unwed mothers on welfare; and here in liberal San Francisco, absent public outcry, Mayor Frank Jordan could succeed in resurrecting a failed “hot-line hotel” program for General Assistance recipients as the centerpiece of the city’s homeless policy.

The hot-line hotel program operated from 1983 to 1989 and steered San Francisco’s poorest residents and millions of tax dollars into residential hotels, some owned or controlled by notorious landlords. The mayor’s new hot-line program, retitled the “direct rent” program, would take as much as 80 percent of GA recipients’ monthly checks and use the money to place people in hotels not of their choosing, some of them with substandard housing conditions. If enacted, this would be one of the most lasting and damaging vestiges of the Jordan regime.

This city must not again give veto power over its homeless programs to millionaire hotel owners who have abused tenants’ rights. Back when the city gave hotel owners control of the hot-line program, some threatened to throw their tenants out on the street unless officials stopped criticizing their run-down hotels. While public entitlements to the poor, disabled individuals, and families are being cut, the mayor’s direct rent program would provide millions of tax dollars to wealthy landlords unable to attract rent-paying tenants in the free market. This is Jordan’s idea of welfare reform.

Since an overwhelming number of GA recipients want to live in decent and safe housing, Jordan’s plan relies on contracting with hotels that recipients are sure to reject to ensure a drop in the GA rolls. The program is designed to reduce the welfare rolls by terminating recipients who refuse to accept this catch-22. The Board of Supervisors can still stop Jordan’s direct rent plan. For months the board has demanded that the program not start until the Department of Social Services (DSS) can prove that there are a sufficient  number of decent and safe hotel rooms available for homeless folks on GA. It even recently voted to put the program’s funding on reserve pending the mayor’s compliance with this condition. But, like Elvis and the B-2 bomber, the hot-line hotel system never quite dies.

Although the board’s decision was approved by its deputy city attorney, the DSS’s deputy city attorney, under direction from the mayor, subsequently claimed that a 1993 opinion from her office made the  board’s action illegal. Then, without even advising the Board of Supervisors, the City Attorney’s Office gave the 1993 opinion to the Controller’s Office and said that funding  for Jordan’s program could begin.

The board must now decide whether to  fight or surrender to Jordan’s tactics. Supervisor Terence Hallinan has led the battle to ensure, among other things, that San Francisco taxpayers don’t waste millions of dollars on court judgments in favor of tenants injured while being forced by the city to live in squalor.

If the city attorney concludes that the board cannot impose conditions on Jordan’s  direct rent plan, then the board must revisit the budget and delete funding for the program. But the supervisors will take this critical step only if they hear a call to arms from their constituents.

Please take a few minutes to write or call the supervisors and urge them to defund the direct rent program. As frustrated and powerless as people feel over events across the country, this is an issue upon which every one who acts will make a difference. Do not let the nightmare of forced squalor bury the dreams of our poorest residents and already oppressed neighborhoods. Do not let Frank Jordan set up a welfare program for notorious slumlords.

Randy Shaw is executive director of the Tenderloin Housing Clinic, (415) 771-9850. Steve  Williams is affiliated with the General Assistance Rights Union.