This Chronicle article highlights THC’s 1998 efforts to encourage City sponsorship of a rental subsidy program that would allow GA recipients to remain housed while they transition to work. 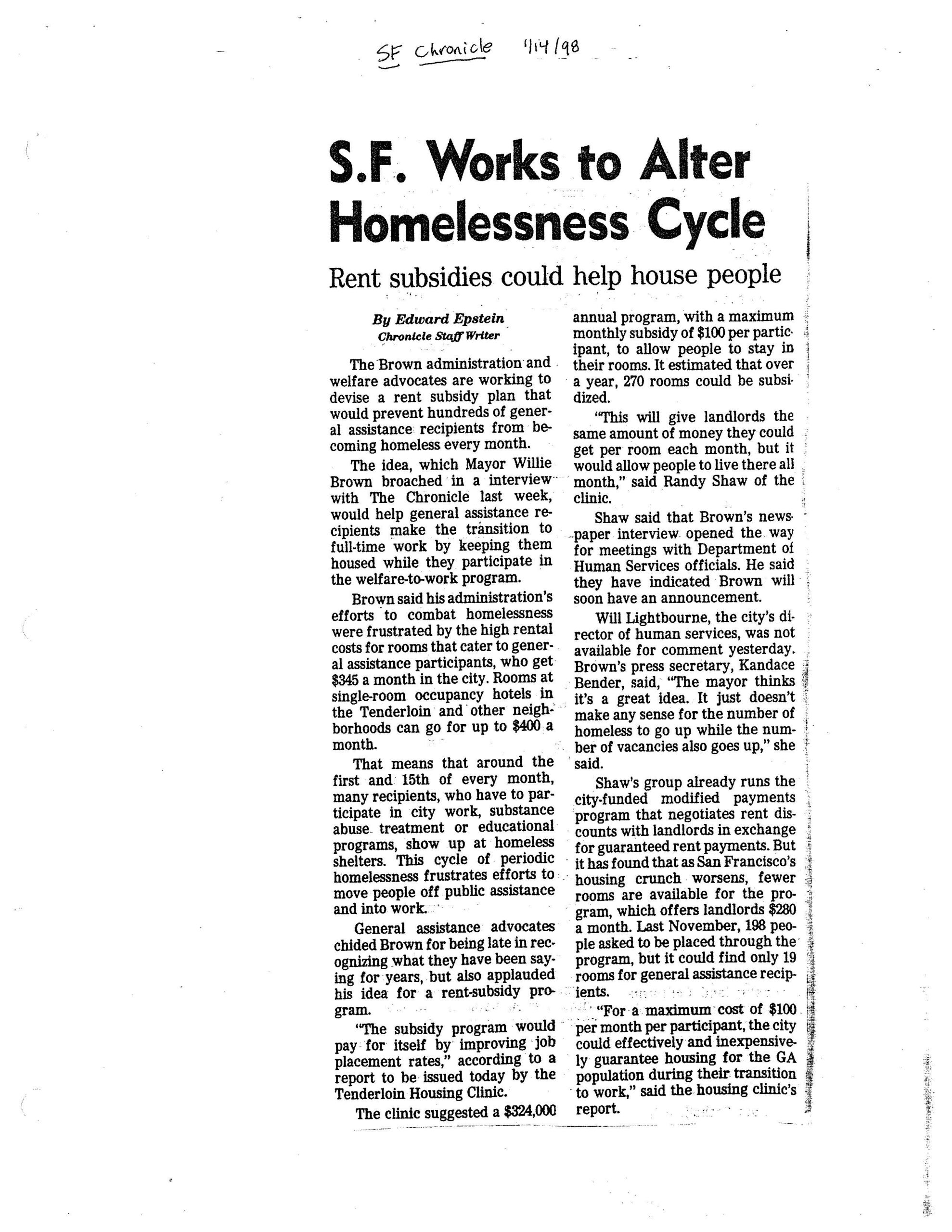 The Brown administration and welfare advocates are working to devise a rent subsidy plan that would prevent hundreds of general assistance recipients from becoming homeless every month.

The idea, which Mayor William Brown broached in an interview with The Chronicle last week, would help general assistance recipients make the transition to full-time work by keeping them housed while they participate in the welfare-to-work program.

Brown said his administration’s efforts to combat homelessness were frustrated by the high rental costs for rooms that cater to general assistance participants, who get $345 a month in the city. Rooms at single-room occupancy hotels in the Tenderloin and other neighborhoods can go for up to $400 a month.

That means that around the first and 15th of every month, many recipients, who have to participate in city work, substance abuse treatment or educational programs, show up at homeless shelters. This cycle of periodic homelessness frustrates efforts to move people off public assistance and into work. General assistance advocates chided Brown for being late in recognizing what they have been saying for years, but also applauded his idea for a rent-subsidy program. “The subsidy program would pay for itself by improving job placements rates,” according to a report to be issued today by the Tenderloin Housing Clinic.

The clinic suggested a $324,000 annual program, with a maximum monthly subsidy of $100 per participant, to allow people to stay in their rooms. It estimated that over a year, 270 rooms could be subsidized.

“This will give landlords the same amount of money they could get per room each month, but it would allow people to live there all month,” said Randy Shaw of the clinic.

Shaw said that Brown’s newspaper interview opened the way for meetings with Department of Human Services officials. He said they have indicated Brown will soon have an announcement.

Will Lightbourne, the city’s director of human services, was not available for comment yesterday. Brown’s press secretary, Kandace Bender, said “The mayor thinks it’s a great idea. It just doesn’t make any sense for the number of homeless to go up while the number of vacancies also goes up,” she said.

Shaw’s group already runs the city-funded modified payments program that negotiates rent discounts with landlords in exchange for guaranteed rent payments. But it has found that as San Francisco’s housing crunch worses, fewer rooms are available for the program, which offers landlords $280 a month. Last November, 198 people asked to be placed through the program, but it could only find 19 rooms for general assistance recipients.

“For a maximum cost of $100 per month per participant, the city could effectively and inexpensively guarantee housing for the GA population during their transition to work,” said the housing clinic’s report.