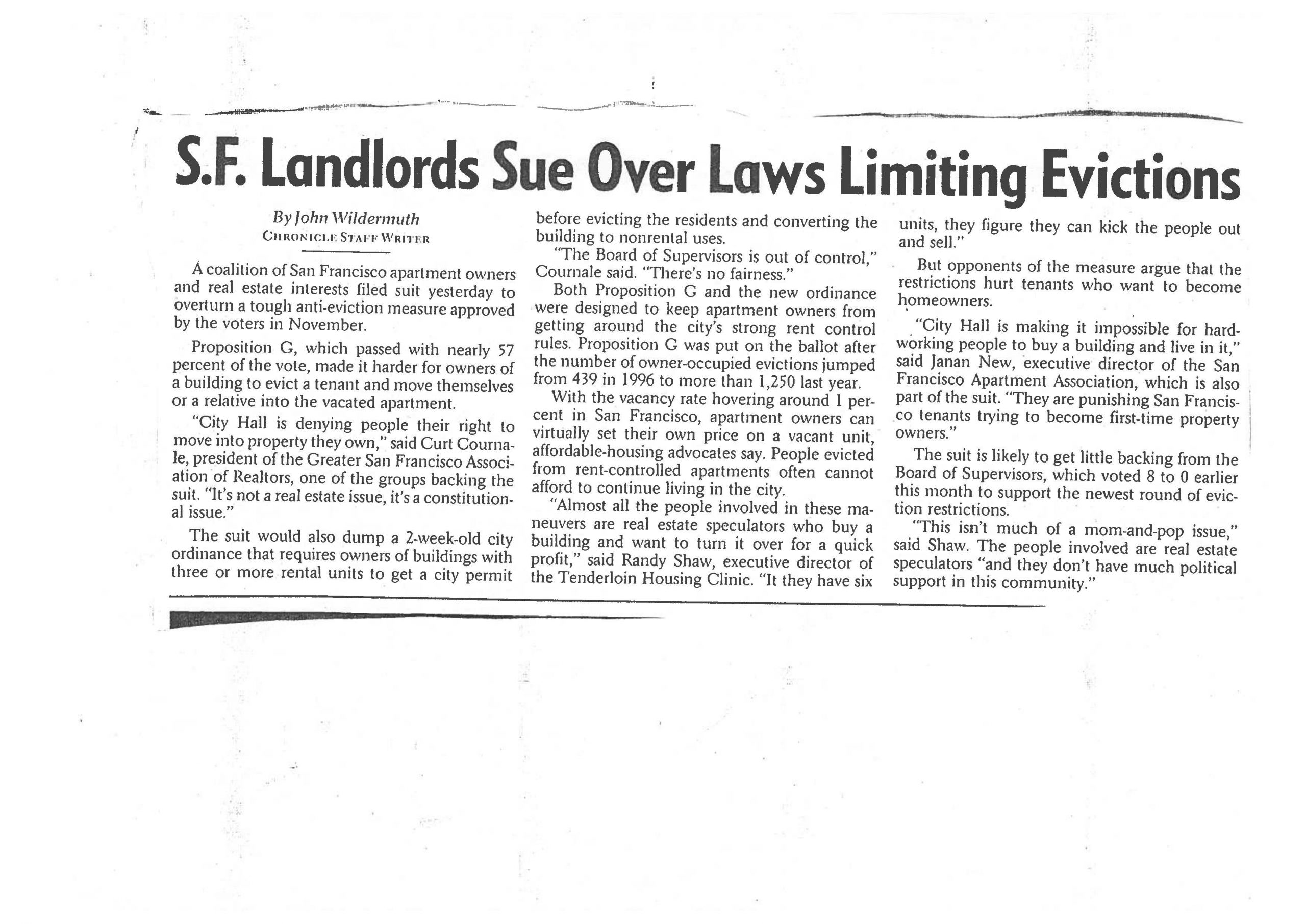 A coalition of San Francisco apartment owners and real estate interests filed suit yesterday to overturn a tough anti-eviction measure approved by the voters in November.

Proposition G, which passed with nearly 57 percent of the vote, made it harder for owners of a building to evict a tenant and move themselves or a relative into the vacated apartment.

“City Hall is denying people their right to move into property they own,” said Curt Cournale, president of the Greater San Francisco Association of Realtors, one of the groups backing the suit. “It’s not a real estate issue, it’s a constitutional issue.”

The suit would also dump a 2-week-old city ordinance that requires owners of buildings with three or more rental units to get a city permit before evicting the residents and converting the building to non rental uses.

“The Board of Supervisors is out of control,” Cournale said. “There’s no fairness.”

Both Proposition G and the new ordinance were designed to keep apartment owners from getting around the city’s strong rent control rules. Proposition G was put on the ballot after the number of owner-occupied evictions jumped from 439 in 1996 to more than 1,250 last year.

With the vacancy rate hovering around 1 percent in San Francisco, apartment owners can virtually set their own price on a vacant unit, affordable-housing advocates say. People evicted from rent-controlled apartments often cannot afford to continue living in the city.

“Almost all the people involved in these maneuvers are real estate speculators who buy a building and want to turn it over for a quick profit,” said Randy Shaw, executive director of the Tenderloin Housing Clinic. “If they have six units, they figure they can kick people out and sell.”

But opponents of the measure argue that the restrictions hurt tenants who want to become homeowners.

“City Hall is making it impossible for hardworking people to buy a building and live in it,” said Janan New, executive director of San Francisco Apartment Association, which is also part of the suit. “They are punishing San Francisco tenants trying to become first-time property owners.”

The suit is likely to get little backing from the Board of Supervisors, which voted 8 to 0 earlier this month to support the newest round of eviction restrictions.

“This isn’t much of a mom-and-pop issue,” said Shaw. The people involved are real estate speculators “and they don’t have much political support in this community.”