SF Judge issues a permanent injunction barring Hotel Owner Adam Sparks from renting rooms to tourists. A win for hotel conversion and zoning laws – showing they can be enforced. 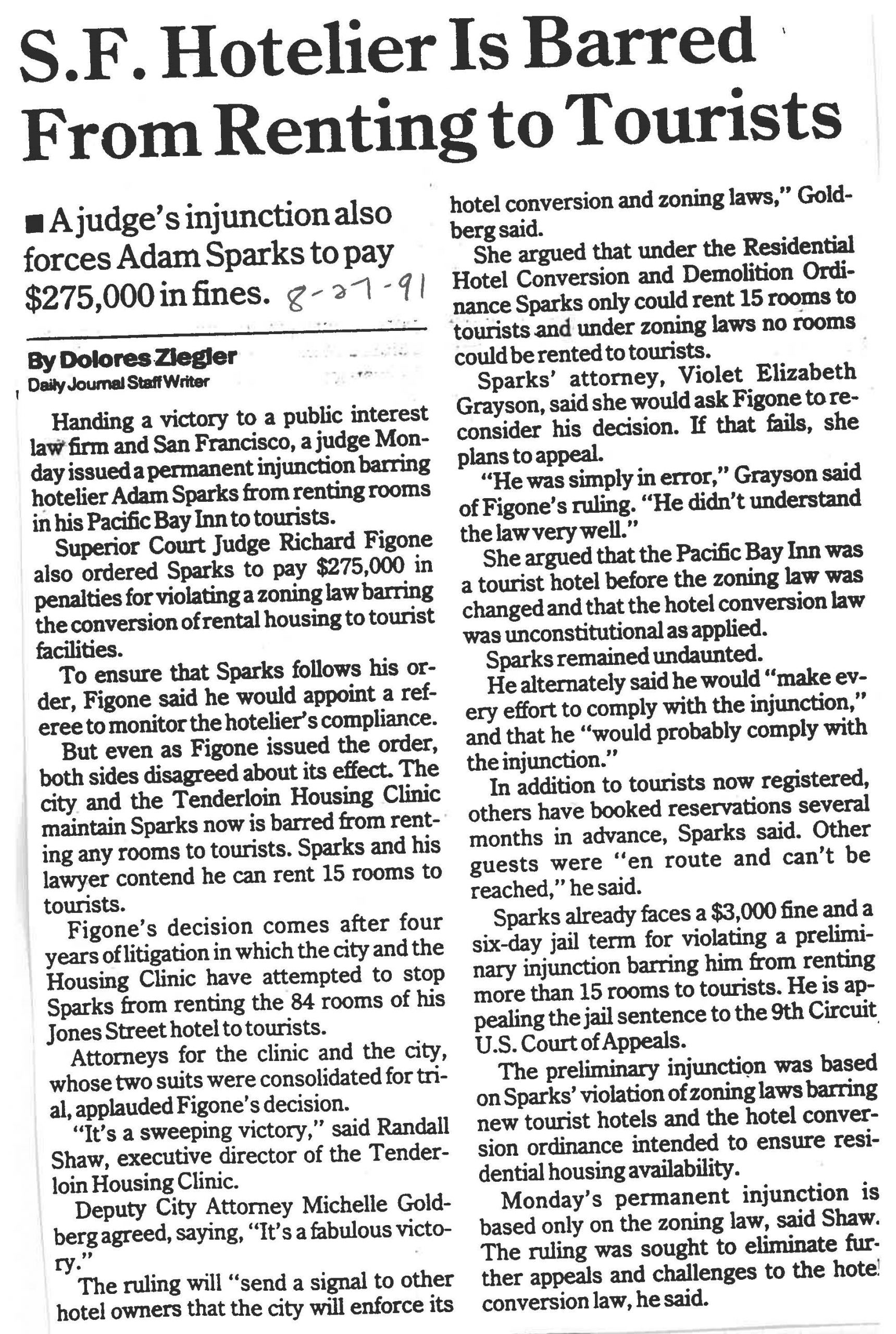 S.F. Hotelier Is Barred From Renting to Tourists

Handing a victory to a public interest law firm and San Francisco, a judge Monday issued a permanent injunction barring hotelier Adam Sparks from renting rooms in his Pacific Bay Inn to tourists.

To ensure that Sparks follows his order, Figone said he would appoint a referee to monitor the hotelier’s compliance.

But even as Figone issued the order, both sides disagreed about its effect. The city and the Tenderloin Housing Clinic maintain Sparks now is barred from renting any rooms to tourists. Sparks and his lawyer contend he can rent 15 rooms to tourists.

Figone’s decision comes after four years of litigation in which the city and the Housing Clinic have attempted to stop Sparks from renting the 84 rooms of his Jones Street hotel to tourists.

Attorney’s for the clinic and the city, whose two suits were consolidated for trial, applauded Figone’s decision.

The ruling will “send a signal to other hotel owners that the city will enforce its hotel conversion and zoning laws,” Goldberg said.

She argued that under the Residential Hotel Conversion and Demolition Ordinance Sparks only could rent 15 rooms to tourists and under zoning laws no rooms could be rented to tourists.

Sparks’ attorney, Violet Elizabeth Grayson, said she would ask Figone to reconsider his decision. If that fails, she plans to appeal.

“He was simply in error,” Grayson said of Figone’s ruling. “He didn’t understand the law very well.”

She argued that the Pacific Bay Inn was a tourist hotel before the zoning law was changed and that the hotel conversion law was unconstitutional as applied. Sparks remained undaunted.

In addition to tourists now registered, others have booked reservations several months in advance, Sparks said. Other guests were “en route and can’t be reached,” he said.

Sparks already faces a $3,000 fine and a six-day jail term for violating a preliminary injunction barring him from renting more than 15 rooms to tourists. He is appealing the jail sentence to the 9th Circuit U.S. Court of Appeals.

The preliminary injunction was based on Sparks’ violation of zoning laws barring new tourist hotels and the hotel conversion ordinance intended to ensure residential housing availability.

Monday’s permanent injunction is based only on the zoning law, said Shaw. The ruling was sought to eliminate further appeals and challenges to the hotel conversion law, he said.