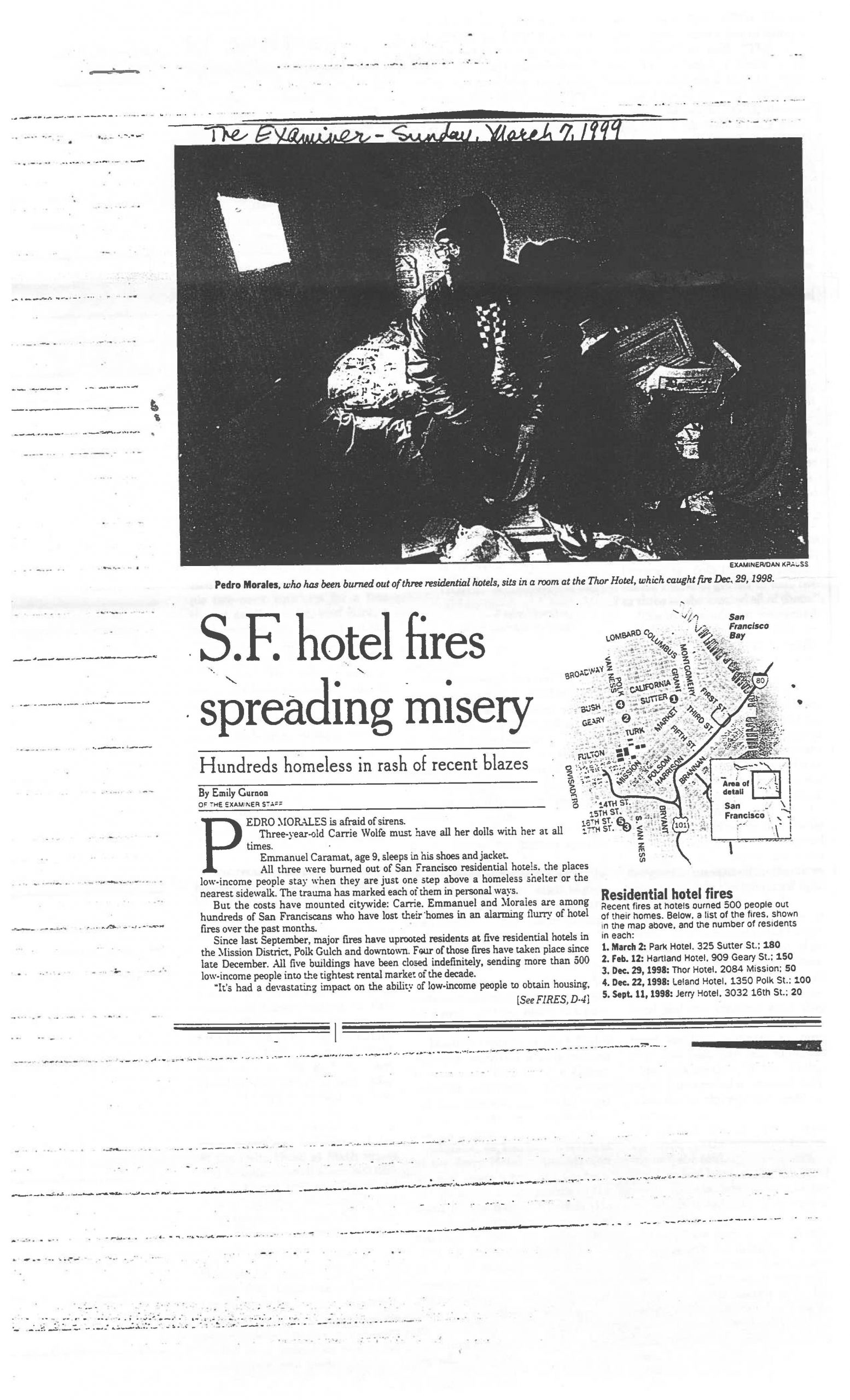 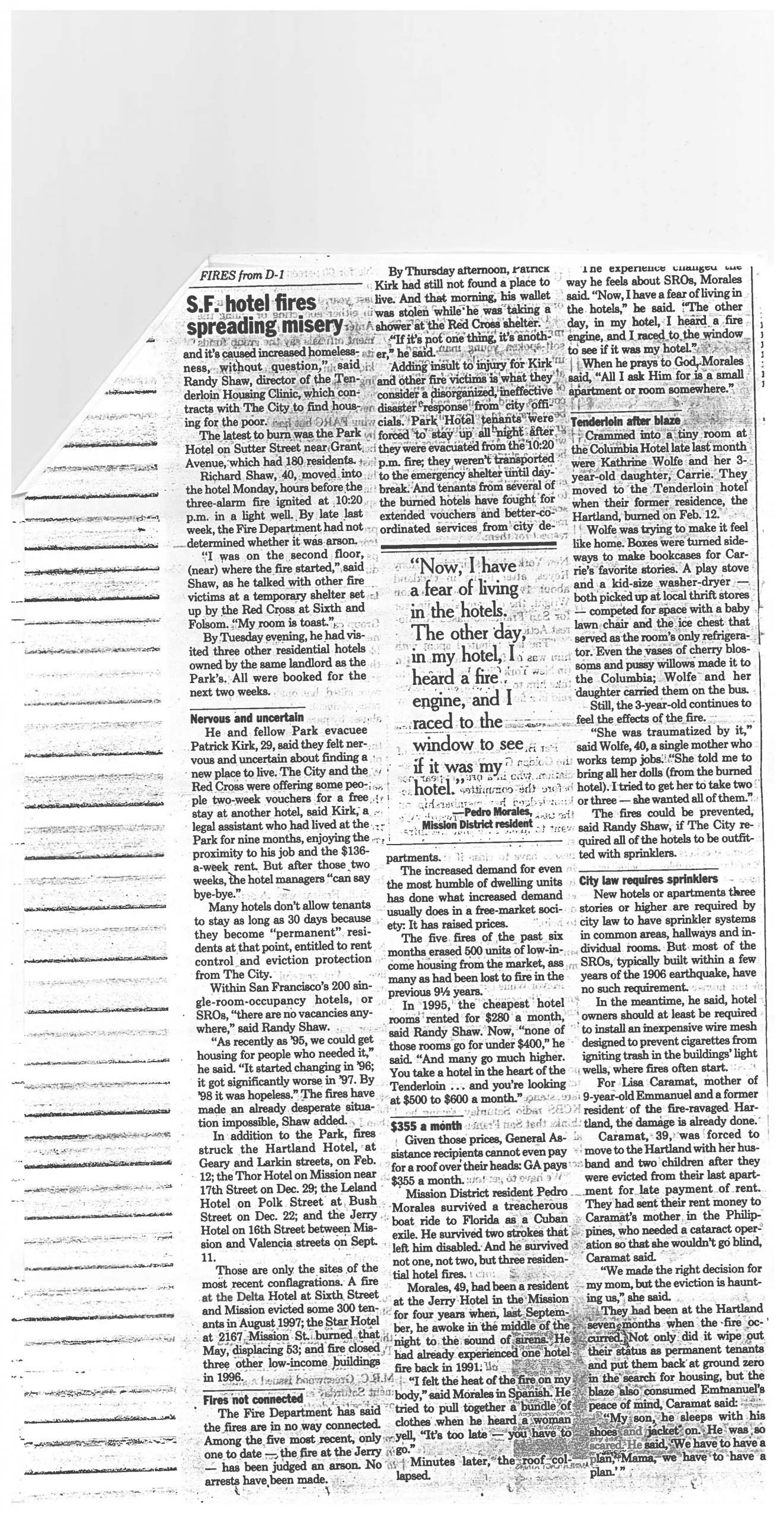 PEDRO MORALES is afraid of sirens.

Three-year-old Carrie Wolfe must have all her dolls with her at all times.

Emmanuel Caranat, age 9, sleeps in his shoes and jacket.

All three were burned out of San Francisco residential hotels, the places low-income people stay when they are just one step above a homeless shelter or the nearest sidewalk. The trauma has marked each of them in personal ways.

But the costs have mounted citywide: Carrie, Emmanuel and Morales are among hundreds of San Franciscans who have lost their homes in an alarming flurry of hotel fires over the past months.

Since last September, major fires have uprooted residents at five residential hotels in the Mission District, Polk Gulch and downtown. Four of those fires have taken place since late December. All five buildings have been closed indefinitely, sending more than 500 low-income people into the tightest rental market of the decade.

“It’s had a devastating impact on the ability of low-income people to obtain housing.

S.F. hotel fires spreading misery And it’s caused increased homelessness, without question,” said Randy Shaw, director of the Tenderloin Housing Clinic, which contracts with The City to find housing for the poor.

The latest to burn was the Park Hotel on Sutter Street near Grant Avenue, which had 180 residents.

Richard Shaw, 40, moved into the hotel Monday, hours before the three-alarm fire ignited at 10:20 pm in a light well. By late last week, the Fire Department had not determined whether it was arson.

“I was on the second floor, (near) where the fire started,” said Shaw, as he talked with other fire victims at a temporary shelter set up by the Red Cross at Sixth and Folsom. “My room is toast.”

By Tuesday evening, he had visited three other residential hotels owned by the same landlord as the Park’s. All were booked for the next two weeks.

He and fellow Park evacuee Patrick Kirk, 29, said they felt nervous and uncertain about finding a new place to live. The City and the Red Cross were offering some people two-week vouchers for a free stay at another hotel, said Kirk, a legal assistant who had lived at the Park for nine months, enjoying the proximity to his job and the $136-a-week rent. But after those two weeks, the hotel managers “can say bye-bye.”

Many hotels don’t allow tenants to stay as long as 30 days because they become “permanent” residents at that point, entitled to rent control and eviction protection from The City.

Within San Francisco’s 200 single-room-occupancy hotels, or SROs, “there are no vacancies anywhere,” said Randy Shaw.

“As recently as ‘95, we could get housing for people who needed it,” he said. “It started changing in ‘96; it got significantly worse in ‘97. By ‘98 it was hopeless.” The fires have made an already desperate situation impossible, Shaw added.

In addition to the Park, fires struck the Hartland Hotel, at Geary and Larkin streets, on Feb. 12; the Thor Hotel on Mission near 17th Street on Dec. 29; the Leland Hotel on 16th Street between Mission and Valencia streets on Sept. 11.

Those are only the sites of the most recent conflagrations. A fire at the Delta Hotel at Sixth Street and Mission evicted some 300 tenants in August 1997; the Star Hotel at 2167 Mission St. burned that May, displacing 53; and fire closed three other low-income buildings in 1996.

The Fire Department has said the fires are in no way connected. Among the five most recent, only one to date — the fire at the Jerry — has been judged an arson. No arrests have been made.

By Thursday afternoon, Patrick Kirk had still not found a place to live. And that morning, his wallet was stolen while he was taking a shower at the Red Cross shelter.

Adding insult to injury for Kirk and other fire victims is what they consider a disorganized, ineffective disaster response from city officials. Park Hotel tenants were forced to stay up all night after they were evacuated from the 10:20 p.m. fire; they weren’t transported to the emergency shelter until daybreak. And tenants from several of the burned hotels have fought for extended vouchers and better-coordinated services from city departments.

The five fires of the past six months erased 500 units of low-income housing from the market, as many as had been lost to fire in the previous 9 ½ years.

Given those prices, General Assistance recipients cannot even pay for a roof over their heads: GA pays $355 a month.

Mission District resident Pedro Morales survived a treacherous boat ride to Florida as a Cuban exile. He survived not one, not two, but three residential hotel fires.

Morales, 49, had been a resident at the Jerry Hotel in the Mission for four years when, last September, he awoke in the middle of the night to the sound of sirens. He had already experienced one hotel fire back in 1991.

“I felt the heat of the fire on my body,” said Morales in Spanish. He tried to pull together a bundle of clothes when he heard a woman yell, “It’s too late — you have to go.”

The experience changed the way he feels about SROs, Morales said. “Now, I have a fear of living in the hotels,” he said. “The other day, in my hotel, I heard a fire engine, and I raced to the window to see if it was my hotel.”

When he prays to God, Morales said, “All I ask Him for is a small apartment or room somewhere.”

Crammed into a tiny room at the Columbia Hotel late last month were Kathrine Wolfe and her 3-year-old daughter, Carrie. They moved to the Tenderloin hotel when their former residence, the Hartland, burned on Feb. 12.

Wolfe was trying to make it feel like home. Boxes were turned sideways to make bookcases for Carrie’s favorite stories. A play stove and a kid-size washer-dryer — both picked up at local thrift stores — competed for space with a baby lawn chair and the ice chest that served as the room’s only refrigerator. Even the vases of cherry blossoms and pussy willows made it to the Columbia; Wolfe and her daughter carried them on the bus.

Still, the 3-year-old continues to feel the effects of the fire.

“She was traumatized by it,” said Wolfe, 40, a single mother who works temp jobs. “She told me to bring all her dolls (from the burned hotel). I tried to get her to take two or three — she wanted all of them.”

The fires could be prevented, said Randy Shaw, if The City required all of the hotels to be outfitted with sprinklers.

New hotels or apartments three stories or higher are required by city law to have sprinkler systems in common areas, hallways and individual rooms. But most of the SROs, typically built within a few years of the 1906 earthquake, have no such requirement.

In the meantime, he said, hotel owners should at least be required to install an inexpensive wire mesh designed to prevent cigarettes from igniting trash in the buildings’ light wells, where fires often start.

For Lisa Caramat, mother of 9-year-old Emmanuel and a former resident of the fire-ravaged Hartland, the damage is already done.

Caramat, 39, was forced to move to the Hartland with her husband and two children after they were evicted from their last apartment for late payment of rent. They had sent their rent money to Caramat’s mother in the Philippines, who needed a cataract operation so that she wouldn’t go blind Caramat said.

“We made the right decision for my mom, but the eviction is haunting us,” she said.

They had been at the Hartland seven months when the fire occurred. Not only did it wipe out their status as permanent tenants and put them back at ground zero in search for housing, but the blaze also consumed Emmanuel’s peace of mind, Caramat said: