Residential hotels are awarded lifeline utility rates, a win for residential hotel owners as it can shave up to a million off hotel utility bills annually. 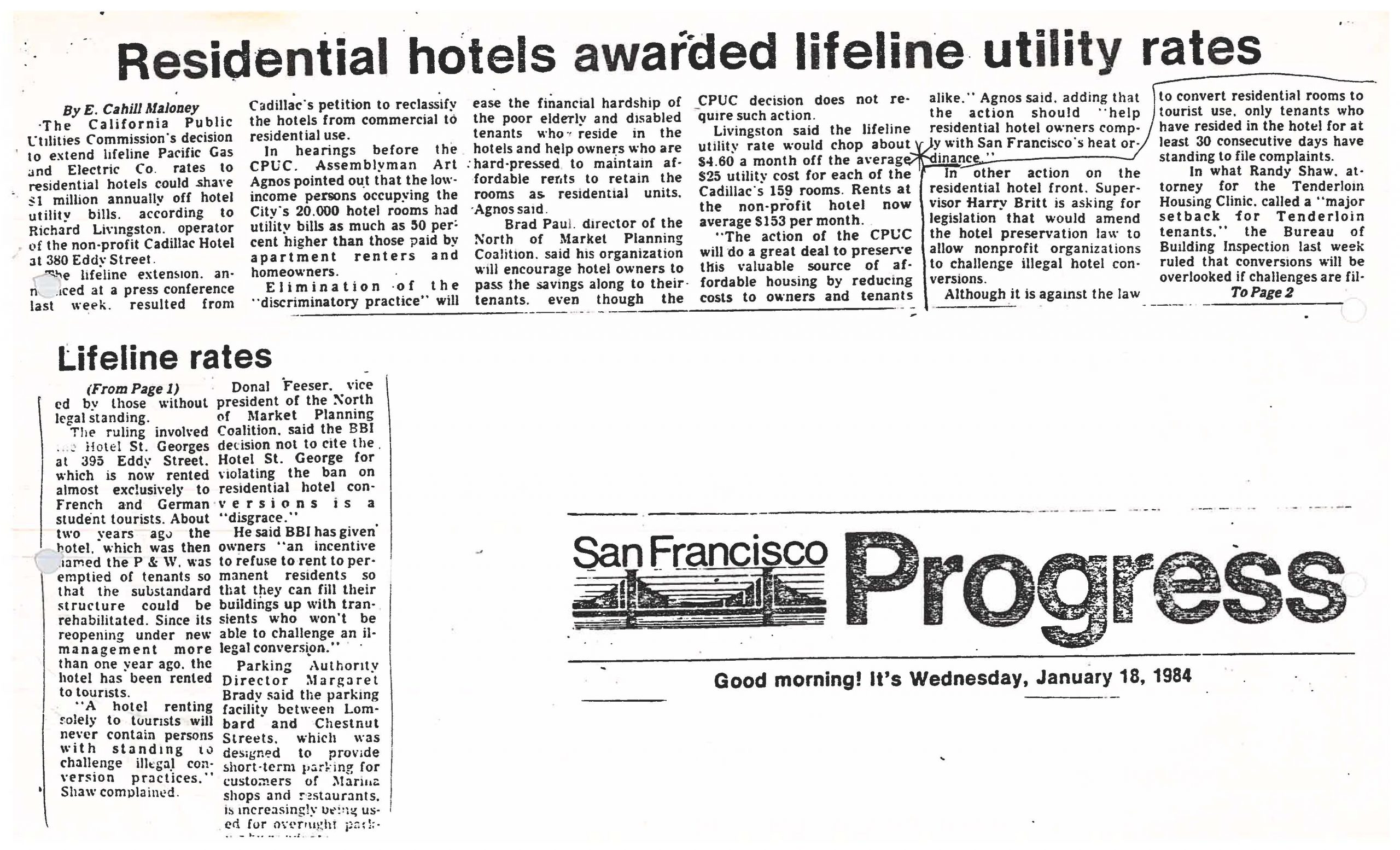 The lifeline extension announced at a press conference last week resulted from Cadillac’s petition to reclassify the hotels from commercial to residential use.

In hearings before the CPUC, Assemblyman Art Agnos pointed out that the low-income persons occupying the City’s 20,000 hotel rooms had utility bills as much as 50 percent higher than those paid by apartment renters and homeowners.

Elimination of the “discriminatory practice” will ease the financial hardship of the poor elderly and disabled tenants who reside in the hotels and help owners who are hard-pressed to maintain affordable rents to retain the rooms as residential units, Agnos said.

Brad Paul, director of the North of Market Planning Coalition said his organization will encourage hotel owners to pass the savings along to their tenants, even though the CPUC decision does not require such action.

Livingston said the lifeline utility rate would chop about $4.60 a month off the average $25 utility cost for each of the Cadillac’s 159 rooms. Rents at the non-profit hotel now average $153 per month.

“The action of the CPUC will do a great deal to preserve the valuable source of affordable housing by reducing costs to owners and tenants alike.” Agnos said, adding that the action should “help residential hotel owners comply with San Francisco’s heat ordinance.”

In other action on the residential hotel front Supervisor Harry Britt is asking for legislation that would amend the hotel preservation law to allow nonprofit organizations to challenge illegal hotel conversions.

Although it is against the law to convert residential rooms to tourist use, only tenants who have resided in the hotel for at least 30 consecutive days have standing to file complaints.

In what Randy Shaw, attorney for the Tenderloin Housing Clinic, called a “major setback for Tenderloin tenants,” the Bureau of Building Inspection last week ruled that conversions will be overlooked if challenges are filed by those without legal standing.

The ruling involved the Hotel St. Georges at 395 Eddy Street, which is now rented almost exclusively to French and German student tourists. About two years ago the hotel, which was then named the P&W, was emptied of tenants so that the substandard structure could be rehabilitated. Since its reopening under new management more than one year ago, the hotel has been rented to tourists.

Donal Feeser, vice president of the North of Market Planning Coalition, said the BBI decision not to cite the Hotel St. George for violating the ban on residential hotel conversions is a “disgrace.”

He said BBI has given owners “an incentive to refuse to rent permanent residents so that they can fill their buildings up with transients who won’t be able to challenge an illegal conversion.”

Parking Authority Director Margaret Brady said the parking facility between Lombard and Chestnut Streets, which was designed to provide short-term parking for customers of Marine shops and restaurants, is increasingly being used for overnight parking.