The owner of the Abigail Hotel, now managed by THC, was denied an attempt at converting the building to tourist use under the Residential Hotel Unit Conversion and Demolition Ordinance. 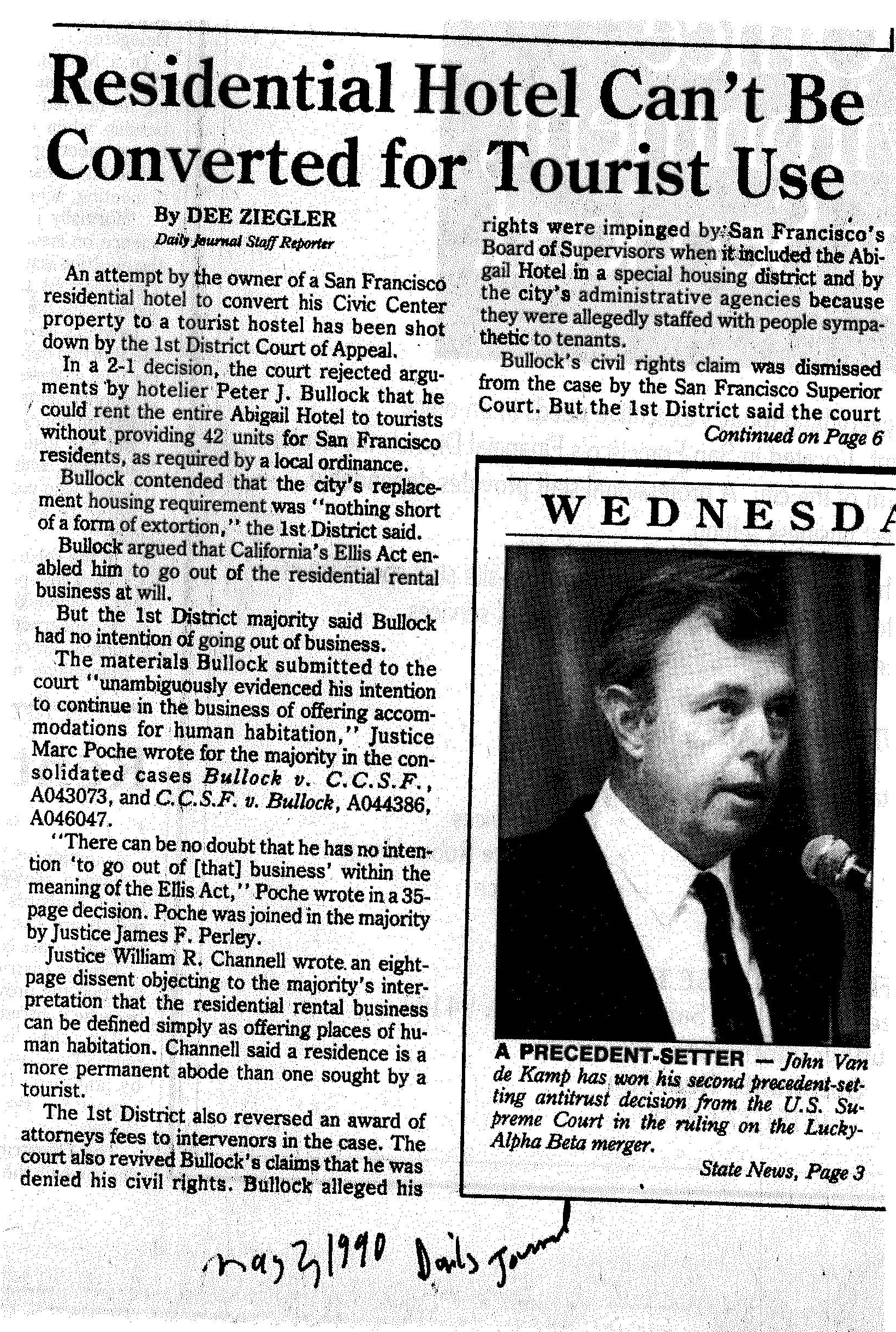 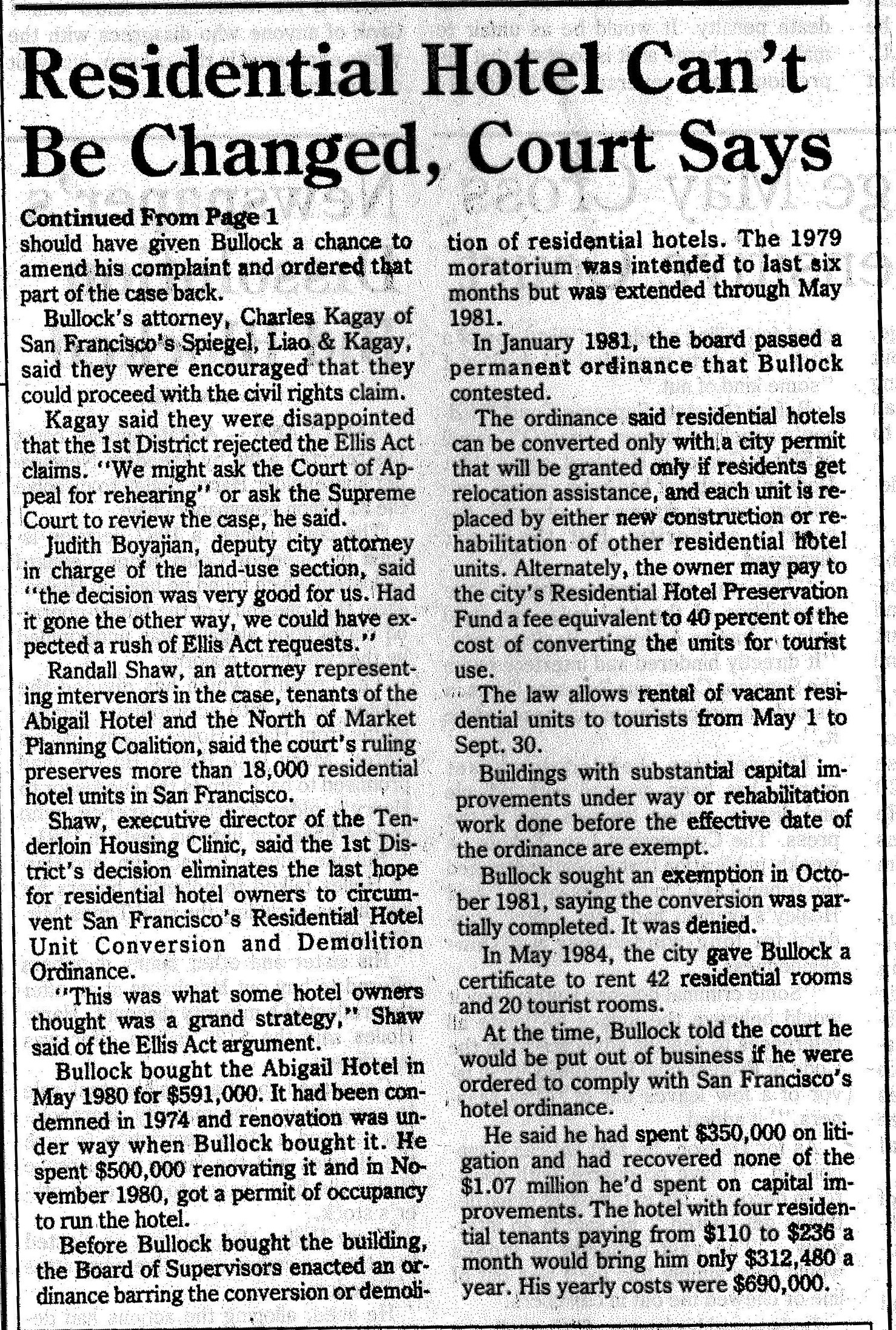 Residential Hotel Can’t Be Converted for Tourist Use

An attempt by the owner of a San Francisco residential hotel to convert his Civic Center property to a tourist hostel has been shot down by the 1st District Court of Appeal.

In a 2-1 decision, the court rejected arguments by hotelier Peter J. Bullock that he could rent the entire Abigail Hotel to tourists without providing 42 units for San Francisco residents, as required by a local ordinance.

Bullock contended that the city’s replacement housing requirement was “nothing short of a form of extortion,” the 1st District said. Bullock argued that California’s Ellis Act enabled him to go out of the residential rental business at will. But the 1st District majority said Bullock had no intention of going out of business.

The materials Bullock submitted to the court “unambiguously evidenced his intentions to continue in the business of offering accommodations for human habitation,” Justice Marc Poche wrote for the majority in the consolidated cases Bullock v. C.C.S.F. , A043073, and C.C.S.F. v. Bullock, A044386, A046047.

“There can be no doubt that he has no intention ‘to go out of [that] business’ within the meaning of the Ellis Act,” Poche wrote in a 35- page decision. Poche was joined in the majority by Justice James F. Perley.

Justice William R. Channell wrote an eight page dissent objecting to the majority’s interpretation that the residential rental business can be defined simply as offering places of human habitation. Channell said a residence is a more permanent abode than one sought by a tourist.

The 1st District also reversed an award of attorneys fees to intervenors in the case. The court also revived Bullock’s claims that he was denied his civil rights. Bullock alleged his rights were impinged by San Francisco’s Board of Supervisors when it included the Abigail Hotel in a special housing district and by the city’s administrative agencies because they were allegedly staffed with people sympathetic to tenants.

Bullock’s civil rights claim was dismissed from the case by the San Francisco Superior Court. But the 1st District said the court should have given Bullock a chance to amend his complaint and ordered that part of the case back.

Bullock’s attorney, Charles Kagay of San Francisco’s Spiegel, Liao & Kagay, said they were encouraged that they could proceed with the civil rights claim. Kagay said they were disappointed that the 1st District rejected the Ellis Act claims. “We might ask the Court of Appeal for rehearing” or ask the Supreme Court to review the case, he said.

Judith Boyajian, deputy city attorney in charge of the land-use section, said “the decision was very good for us. Had it gone the other way, we could have expected a rush of Ellis Act requests.”

Randall Shaw, an attorney representing intervenors in the case, tenants of the Abigail Hotel and the North of Market Planning Coalition, said the court’s ruling preserves more than 18,000 residential hotel units in San Francisco.

Shaw, Executive Director of the Tenderloin Housing Clinic, said the 1st District’s decision eliminates the last hope for residential hotel owners to circumvent San Francisco’s Residential Hotel Unit Conversion and Demolition Ordinance. “This was what some hotel owners thought was a grand strategy,” Shaw said of the Ellis Act argument.

Bullock bought the Abigail Hotel in May 1980 for $591,000. It had been condemned in 1974 and renovation was underway when Bullock bought it. He spent $500,000 renovating it and in November 1980, got a permit of occupancy to run the hotel. Before Bullock bought the building, the Board of Supervisors enacted an ordinance barring the conversion or demolition of residential hotels. The 1979 moratorium was intended to last six months but was extended through May 1981.

In January 1981, the board passed a permanent ordinance that Bullock contested. The ordinance said residential hotels can be converted only with a city permit that will be granted only if residents get relocation assistance, and each unit is replaced by either new construction or rehabilitation of other residential hotel units. Alternatively, the owner may pay to the city’s Residential Hotel Preservation Fund a fee equivalent to 40 percent of the cost of converting the units for tourist use.

The law allows rental of vacant residential units to tourists from May 1 to Sept. 30. Buildings with substantial capital improvements underway or rehabilitation work done before the effective date of the ordinance are exempt. Bullock sought an exemption in October 1981, saying the conversion was partially completed. It was denied.

In May 1984, the city gave Bullock a certificate to rent 42 residential rooms and 20 tourist rooms. At the time, Bullock told the court he would be put out of business if he were ordered to comply with San Francisco’s hotel ordinance.