Renters protest at BBI and City Hall for action to be done about the code violations they are forced to live with in San Francisco low income hotels and SROs. 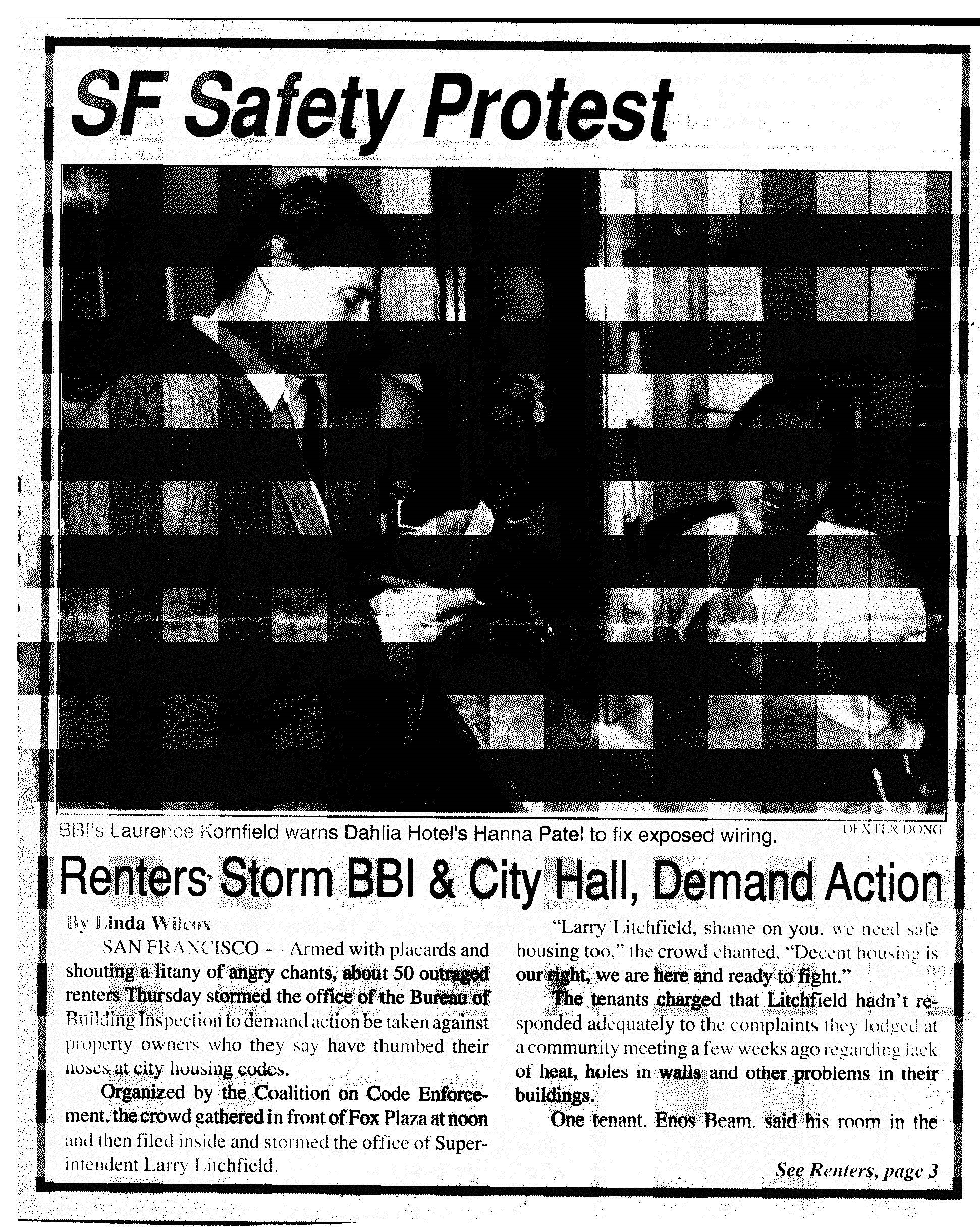 SAN FRANCISCO — Armed with placards and shouting a litany of angry chants, about 50 outraged renters Thursday stormed the office of the Bureau of Building Inspection to demand action be taken against property owners who they say have thumbed their noses at city housing codes.

Organized by the Coalition on Code Enforcement, the crowd gathered in front of Fox Plaza at noon and then filed inside and stormed the office of Superintendent Larry Litchfield.

“Larry Litchfield, shame on you, we need safe housing too,” the crowd chanted, “Decent housing is our right, we are here and ready to fight.”

The tenants charged that Litchfield hadn’t responded adequately to the complaints they lodged at a community meeting a few weeks ago regarding lack of heat, holes in walls and other problems in their buildings..

One tenant, Enos Beam, said his room in the Alder Hotel on Sixth Street has a leaky ceiling, exposed wiring and inadequate circuit breaker, and worries the room will “go up in smoke.”

“I don’t like to complain too much,” Beam said. But if the owner won’t fix the problems, he said, “I’ve got a camera and I’m going to take pictures.”

Beam said he previously lived in the Delta Hotel, also on Sixth Street, and endured drug deals and fires “almost every night.”

“I’m tired of the conditions the welfare people have to put up with,” he said. “Just because we’re on welfare doesn’t mean we aren’t entitled to good living conditions. I’ve lived in cardboard boxes that had better conditions.”

Michael Carright of the Tenants Union said Litchfield “promised he would enforce the building codes…and he hasn’t. We need things to be done. People are suffering. We’ve already filed 100 complaints. We don’t want to talk, talk, talk. We’re tired of waiting.”

Litchfield, however, wasn’t in the office at the time, and code enforcement inspector Robert Noelke offered to go with the group and tour some of the residential hotels to see what the complaints were about. The tenants declined the offer and decided to instead march to City Hall and talk to Litchfield’s boss, Rudy Nothenberg, the city’s chief administrative officer.

The door of Nothenberg’s office was locked and guarded by several police officers, but the tenants continued their demonstration in the hallway. That eventually drew the attention of Vitaly Tryyan, the city’s deputy director for public services, who oversees Litchfield.

Troyan agreed to accompany the group, escorted by nearly a dozen police officers on foot and on motorcycles, to the Dahlia Hotel at 74 Turk St., which many tenants claimed provides some of the most atrocious living quarters in the city.

After trooping through the hotel, Chief Building Inspector Laurence Kornfield handed owner Hanna Patel a notice to fix some exposed electrical wiring in the stairway by the end of the day.

“It’s your obligation as an owner to resolve this problem,” Kornfield told Patel in front of the crowd and several television cameras. “The concern I have is that exposed electrical wires are an imminent hazard.”

Further notices would be forthcoming on other violations in the hotel, he said. Broken latches, a filthy bathroom and holes in the plaster walls were just a few of the conditions evident.

“I try to help everybody, but people give a hard time to me,” responded Patel, who started crying as the contingent left the hotel. “Everyday a problem, every day.”

Tryoan said he would meet with representatives of the problems, particularly the time it takes to report and correct code violations.

“We’re going to have to find a solution to simplify the process,” he said. “The process isn’t happening fast enough. We’ll have to speed it up. We can’t allow this to continue.” He acknowledged the tenants had filed a series of complaints recently that had not been resolved.

Randy Shaw of the Tenderloin Housing Clinic said a big part of the solution should include inspections of hotel rooms after tenants leave so they are in good condition for new General Assistance recipients.

Shaw said he was happy the protest caught the attention of city officials.

“It seems the city has finally gotten the message,” he said. “We’ve tried doing it through community meetings, but unless you demonstrate and knock on doors, you don’t get any attention.”