Disgruntled Hotel Owner Adam Sparks files suit against Randy Shaw – Falsely claiming abuse of the Residential Hotel Ordinance for personal gain. Randy Shaw says this will make the owner look even more foolish, and that they would be making a motion to throw the case out. 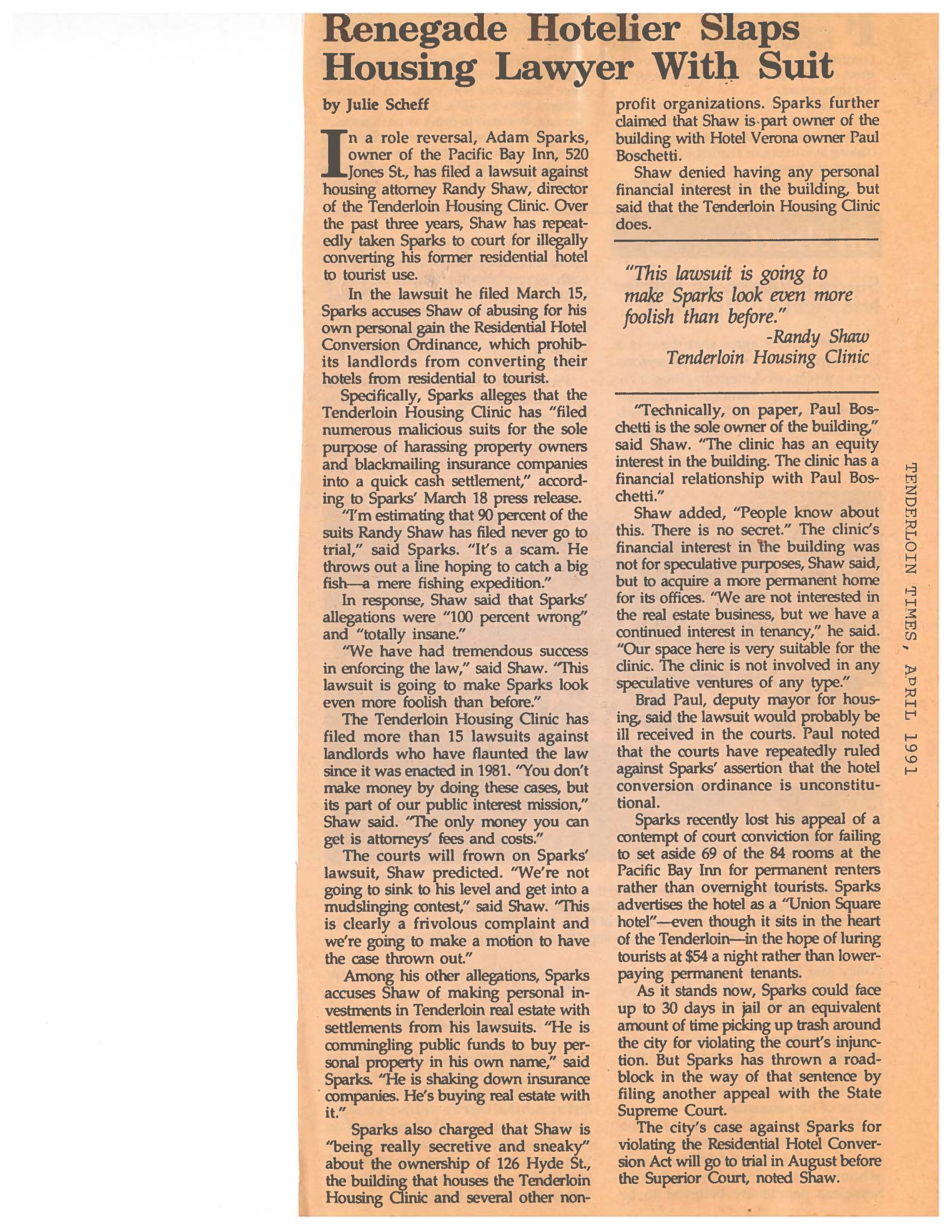 In a role reversal, Adam Sparks, owner of the Pacific Bay Inn, 520 Jones St., has filed a lawsuit against housing attorney Randy Shaw, director of the Tenderloin Housing Clinic. Over the past three years, Shaw has repeatedly taken Sparks to court for illegally converting his former residential hotel to tourist use.

In the lawsuit he filed March 15, Sparks accuses Shaw of abusing for his own personal gain the Residential Hotel Conversion Ordinance, which prohibits landlords from converting their hotels from residential to tourist.

Specifically, Sparks alleges that the Tenderloin Housing Clinic has “filed numerous malicious suits for the sole purpose of harassing property owners and blackmailing insurance companies into a quick cash settlement,” according to Sparks’ March 18 press release.

“I’m estimating that 90 percent of the suits Randy Shaw has filed never go to trial,” said Sparks. “It’s a scam. He throws out a line hoping to catch a big fish-a mere fishing expedition.”

In response, Shaw said that Sparks’ allegations were “100 percent wrong” and “totally insane.”

“We have had tremendous success in enforcing the law,” said Shaw. “This lawsuit is going to make Sparks look even more foolish than before.”

The Tenderloin Housing Clinic has filed more than 15 lawsuits against landlords who have flaunted the law since it was enacted in 1981. “You don’t make money by doing these cases, but it’s part of our public interest mission,” Shaw said. “The only money you can get is attorneys’ fees and costs.”

The courts will frown on Sparks’ lawsuit, Shaw predicted. “We’re not going to sink to his level and get into a mudslinging contest,” said Shaw. “This is clearly a frivolous complaint and we’re going to make a motion to have the case thrown out.”

Among his other allegations, Sparks accuses Shaw of making personal investments in Tenderloin real estate with settlements from his lawsuits. “He is commingling public funds to buy personal property in his own name,” said Sparks. “He is shaking down insurance companies. He’s buying real estate with it.”

Sparks also charged that Shaw is “being really secretive and sneaky” about the ownership of 126 Hyde St., the building that houses the Tenderloin Housing Clinic and several other non–profit organizations. Sparks further claimed that Shaw is part owner of the building with Hotel Verona owner Paul Boschetti.

Shaw denied having any personal financial interest in the building, but said that the Tenderloin Housing Clinic does.

Shaw added, “People know about this. There is no secret.” The clinic’s financial interest in the building was not for speculative purposes, Shaw said, but to acquire a more permanent home for its offices. “We are not interested in the real estate business, but we have a continued interest in tenancy,” he said. “Our space here is very suitable for the clinic. The clinic is not involved in any speculative ventures of any type.”

Brad Paul, deputy mayor for housing, said the lawsuit would probably be ill received in the courts. Paul noted that the courts have repeatedly ruled against Sparks’ assertion that the hotel conversion ordinance is unconstitutional

Sparks recently lost his appeal of a contempt of court conviction for failing to set aside 69 of the 84 rooms at the Pacific Bay Inn for permanent renters rather than overnight tourists. Sparks advertises the hotel as a “Union Square hotel”-even though it sits in the heart of the Tenderloin in the hope of luring tourists at $54 a night rather than lowerpaying permanent tenants.

As it stands now, Sparks could face up to 30 days in jail or an equivalent amount of time picking up trash around the city for violating the court’s injunction. But Sparks has thrown a roadblock in the way of that sentence by filing another appeal with the State Supreme Court.

The city’s case against Sparks for violating the Residential Hotel Conversion Act will go to trial in August before the Superior Court, noted Shaw.