Over 400 religious leaders sign a call to action, co-sponsored by Religious Witness with Homeless People and Housing America, urging the U.S. Government to allocate the $5 billion FHA surplus for affordable housing improvements. 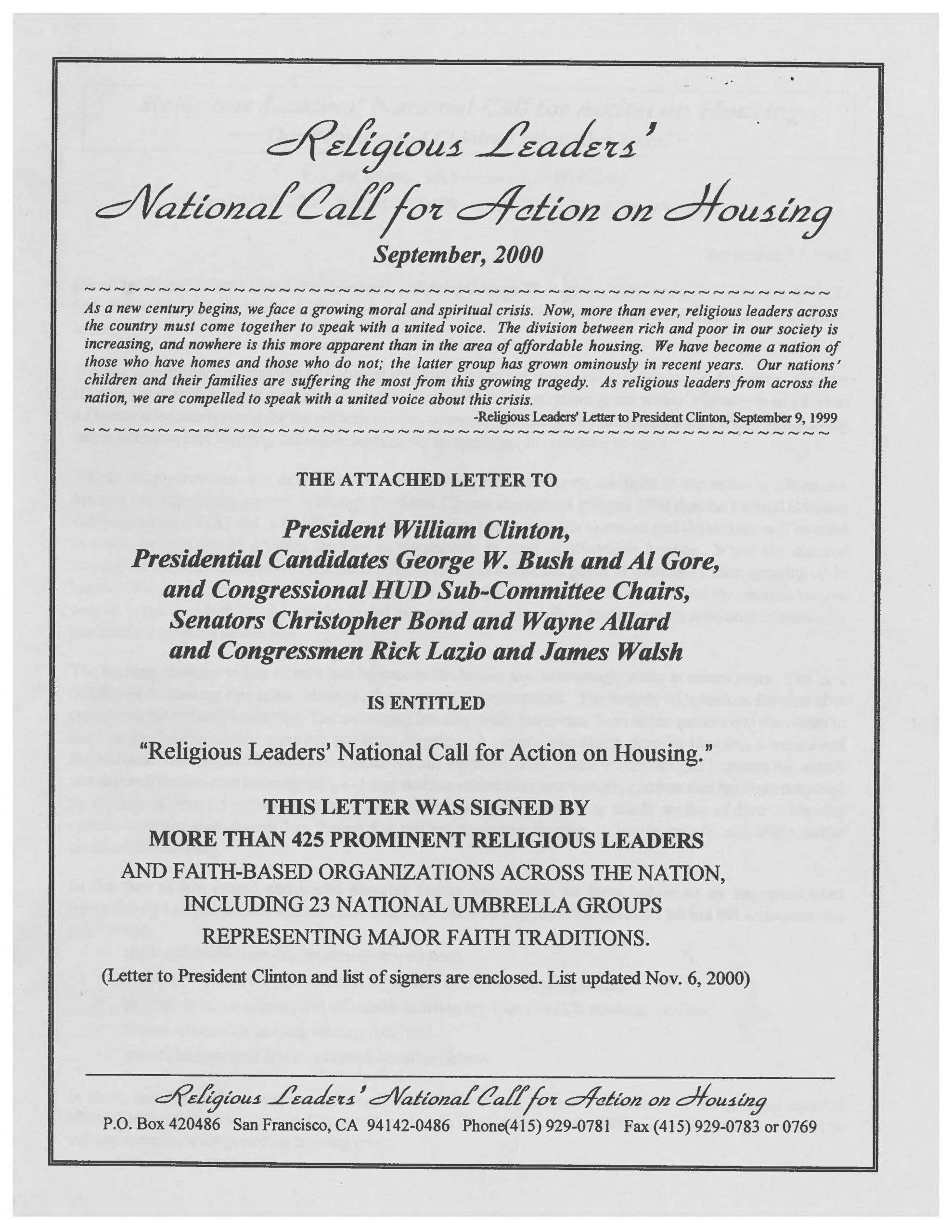 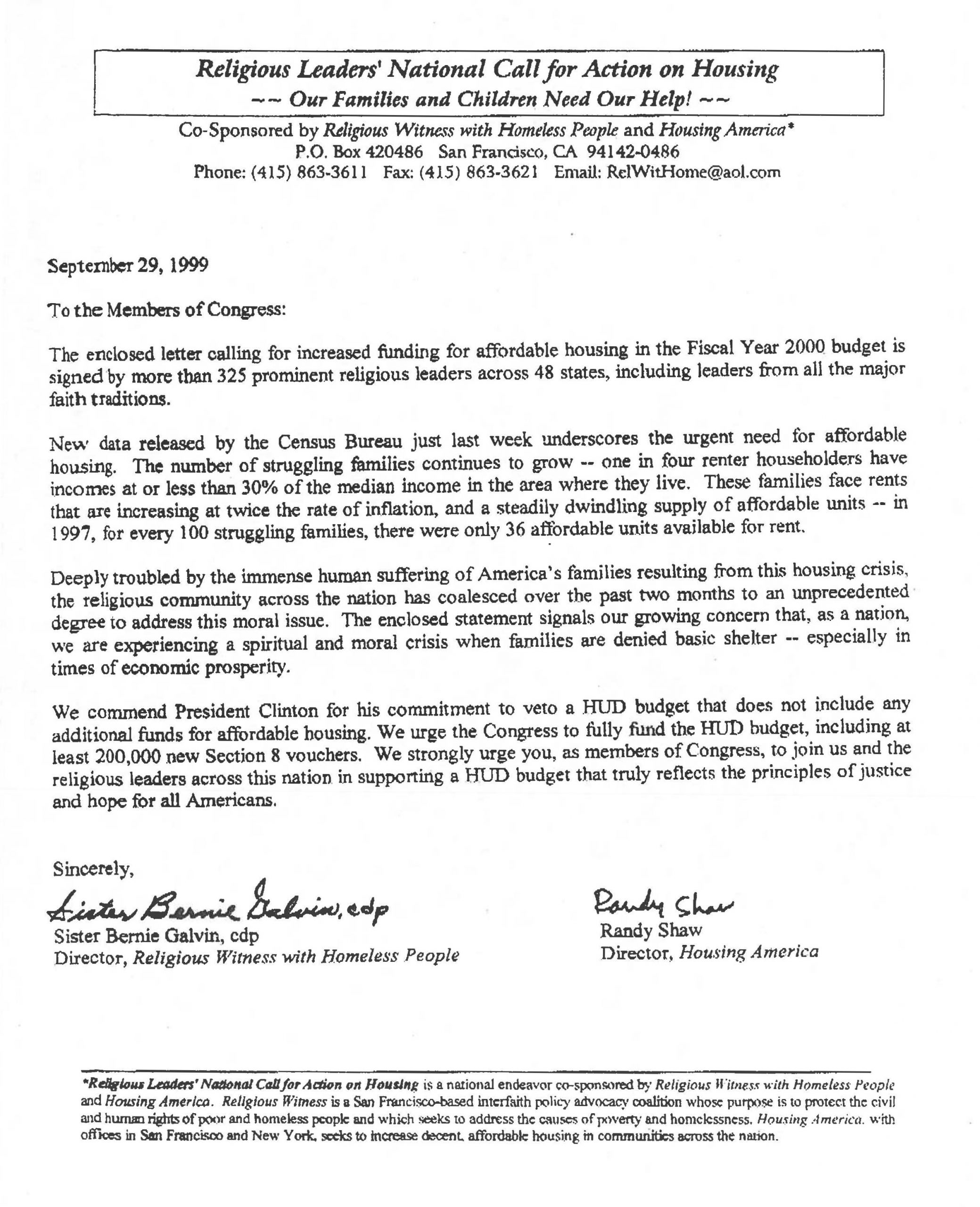 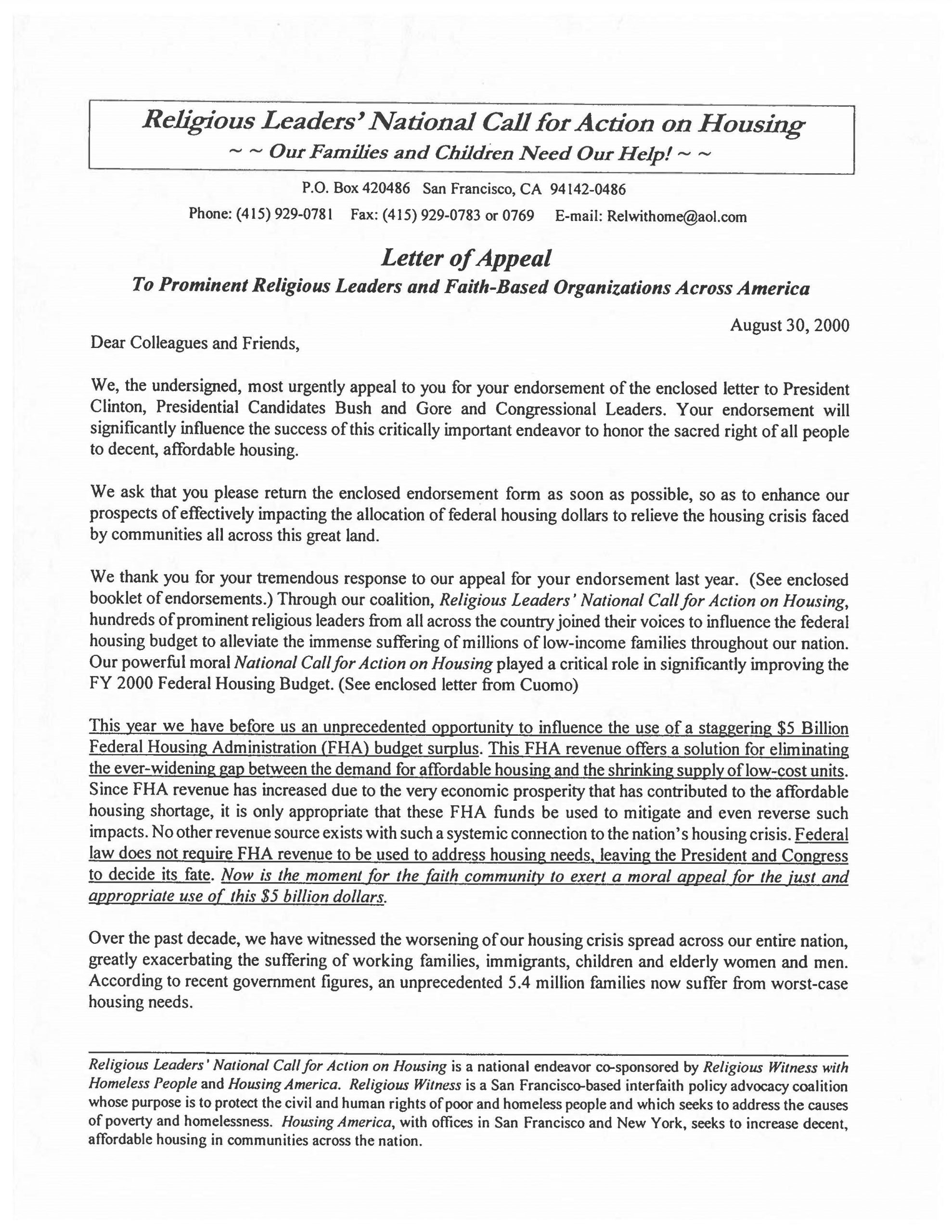 As a new century begins, we face a growing moral and spiritual crisis. Now, more than ever, religious leaders across the nation must come together to speak with a united voice. The division between rich and poor in our society is increasing, and nowhere is this more apparent than in the area of affordable housing. We have become a nation of those who have homes and those who do not; the latter group has grown ominously in recent years. Our nations’ children and their families are suffering the most from this growing tragedy. As religious leaders from across the nation, we are compelled to speak with a united voice about this crisis.

Is entitled
“Religious Leaders’ National Call for Action on Housing.”

This letter was signed by more than 425 prominent religious leaders and father-based organizations across the nation, including 23 national umbrella groups representing major faith traditions.
(Letter to President Clinton and list of signers are enclosed. List updated Nov. 6, 2000)

Religious Leaders’ National Call for Action on Housing
Our Families and Children Need Our Help!
Co-Sponsored by Religious Witness with Homeless People and Housing America

To the Members of Congress:

The enclosed letter calling for increased funding for affordable housing in the Fiscal Year 2000 budget is signed by more than 325 prominent religious leaders across 48 states, including leaders from all the major faith traditions.

New data released by the Census Bureau just last week underscores the urgent need for affordable housing. The number of struggling families continues to grow — one in four renter households have incomes at or less than 30% of the median income in the area where they live. These families face rents that are increasing at twice the rate of inflation, and a steadily dwindling supply of affordable units — in 1997, for every 100 struggling families, there were only 36 affordable units available for rent.

Deeply troubled by the immense human suffering of America’s families resulting from this housing crisis, the religious community across the nation has coalesced over the past two months to an unprecedented degree to address this moral issue. The enclosed statement signals our growing concern that, as a nation, we are experiencing a spiritual and moral crisis when families are denied basic shelter — especially in times of economic prosperity.

We commend President Clinton for his commitment to veto a HUD budget that does not include any additional funds for affordable housing. We urge the Congress to fully fund the HUD budget, including at least 200,000 new Section 8 vouchers. We strongly urge you, as members of Congress, to join us and the religious leaders across this nation in supporting a HUD budget that truly reflects the principles of justice and hope for all Americans.

Religious Leaders National Call for Action on Housing
Our Families and Children Need Our Help!

We, the undersigned, most urgently appeal to you for your endorsement of the enclosed letter to President Clinton, Presidential Candidates Bush and Gore and Congressional Leaders. Your endorsement will significantly influence the success of this critically important endeavor to honor the sacred right of all people to decent, affordable housing.

We ask that you please return the enclosed endorsement form as soon as possible, so as to enhance our prospects of effectively impacting the allocation of federal housing dollars to relieve the housing crisis faced by communities all across this great land.

We thank you for your tremendous response to our appeal for your endorsement last year. (See enclosed booklet of endorsements.) Through our coalition, Religious Leaders’ National Call for Action on Housing, hundreds of prominent religious leaders from all across the country joined their voices to influence the federal housing budget to alleviate the immense suffering of millions of low-income families throughout our nation. Our powerful moral National Call for Action on Housing played a critical role in significantly improving the FY 2000 Federal Housing Budget. (See enclosed letter from Cuomo)

This year we have before us an unprecedented opportunity to influence the use of a staggering $5 Billion Federal Housing Administration (FHA) budget surplus. This FHA revenue offers a solution for eliminating the ever-widening gap between the demand for affordable housing and the shrinking supply of low-cost units. Since FHA revenue has increased due to the very economic prosperity that has contributed to the affordable housing shortage, it is only appropriate that these FHA funds be used to mitigate and even reverse such impacts. No other revenue source exists with such a systemic connection to the nation’s housing crisis. Federal law does not require FHA revenue to be used to address housing needs, leaving the President and Congress to decide its fate. Now is the moment for the faith community to exert a moral appeal for the just and appropriate use of this $5 billion dollars.

Over the past decade, we have witnessed the worsening of our housing crisis spread across our entire nation, greatly exacerbating the suffering of working families, immigrants, children and elderly women and men. According to recent government figures, an unprecedented 5.4 million families now suffer from worst-case housing needs.

Religious Leaders “National Call for Action on Housing” is a national endeavor co-sponsored by Religious Witness with Homeless People and Housing America. Religious Witness is a San Francisco-based interfaith policy advocacy coalition whose purpose is to protect the civil and human rights of poor and homeless people and which seeks to address the causes of poverty and homelessness. Housing America, with offices in San Francisco and New York, seeks to increase decent, affordable housing in communities across the nation.