Leaders of various religious backgrounds receive national attention for their request that the US government allocate more resources to affordable housing. 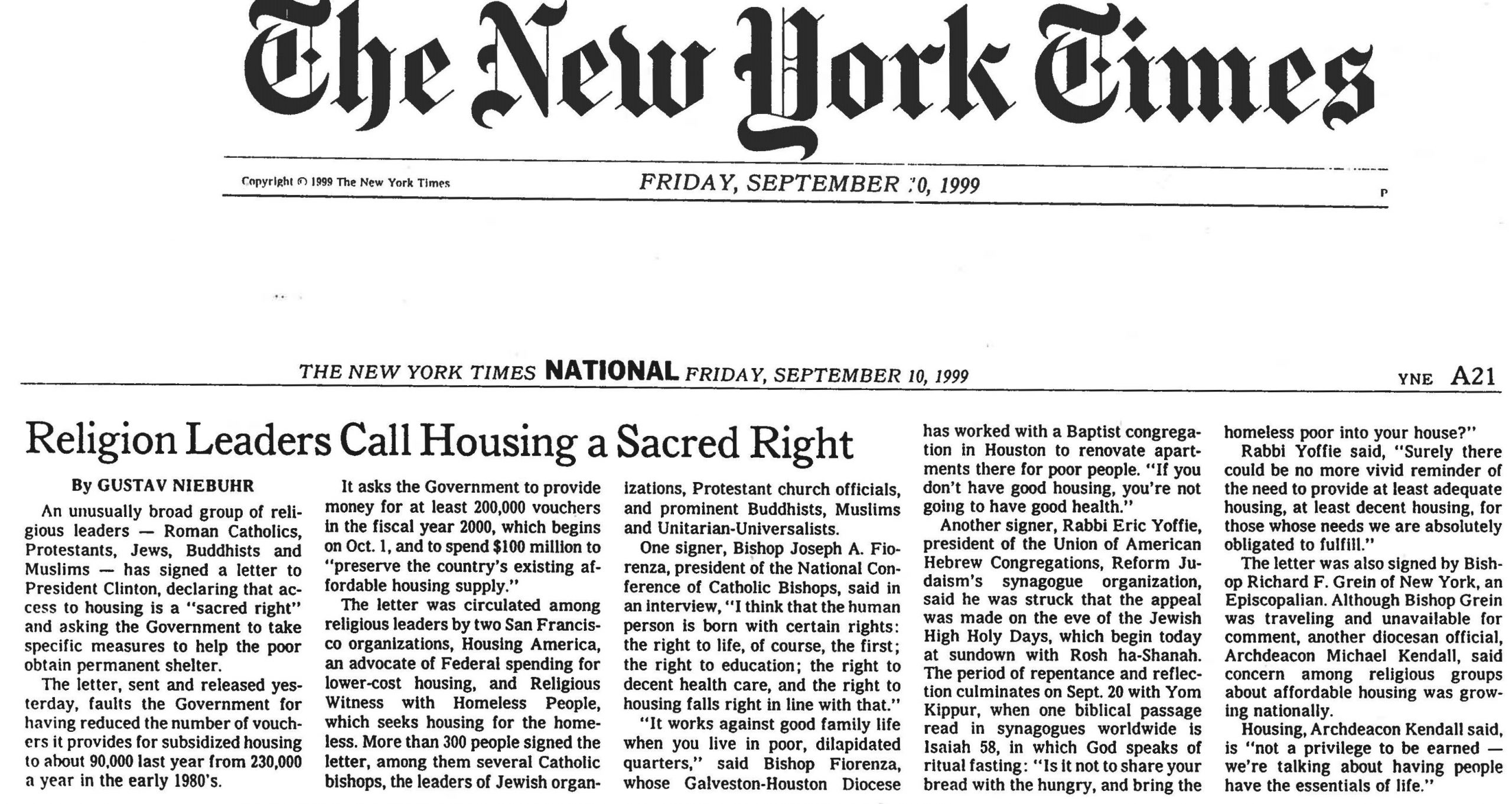 An unusually broad group of religious leaders — Roman Catholics, Protestants, Jews, Buddhists and Muslims — has signed a letter to President Clinton, declaring that access to housing is a “sacred right” and asking the Government to take specific measures to help the poor obtain permanent shelter.

The letter, sent and released yesterday, faults the Government for having reduced the number of vouchers it provides for subsidized housing to about 90,000 last year from 230,000 a year in the early 1980’s.

It asks the Government to provide money for at least 200,000 vouchers in the fiscal year 2000, which begins on Oct. 1, and to spend $100 million to “preserve the country’s existing affordable housing supply.”

The letter was circulated among religious leaders by two San Francisco organizations, Housing America, an advocate of Federal spending for lower-cost housing, and Religious Witness with Homeless People, which seeks housing for the homeless. More than 300 people signed the letter, among them several Catholic bishops, the leaders of Jewish organizations, Protestant church officials, and prominent Buddhists, Muslims and Unitarian-Universalists.

One signer, Bishop Joseph A. Fiorenza, president of the National Conference of Catholic Bishops, said in an interview, “I think that the human person is born with certain rights: the right to life, of course, the first; the right to education; the right to decent health care, and the right to housing falls right in line with that.”

“It works against good family life when you live in poor, dilapidated quarters,” said Bishop Fiorenza, whose Galveston-Houston Diocese has worked with a Baptist congregation in Houston to renovate apartments there for poor people. “If you don’t have good housing, you’re not going to have good health.”

Another signer, Rabbi Eric Yoffie, president of the Union of American Hebrew Congregations, Reform Judaism’s synagogue organization, said he was struck that the appeal was made on the eve of the Jewish High Holy Days, which begin today at sundown with Rosh ha-Shanah. The period of repentance and reflection culminates on Sept. 20 with Yom Kippur, when one biblical passage read in synagogues worldwide is Isaiah 58, in which God speaks of ritual fasting: “Is it not to share your bread with the hungry, and bring the homeless poor into your house?”

Rabbi Yoffie said, “Surely there could be no more vivid reminder of the need to provide at least adequate housing, at least decent housing, for those whose needs we are absolutely obligated to fulfill.”

The letter was also signed by Bishop Richard F. Grein of New York, an Episcopalian. Although Bishop Grein was traveling and unavailable for comment, another diocesan official, Archdeacon Michael Kendall, said concern among religious groups about affordable housing was growing nationally. Housing, Archdeacon Kendall said, is “not a privilege to be earned — we’re talking about having people have the essentials of life.”