California gains the unfortunate notoriety of having the highest nationwide housing wages, with San Francisco topping the list of how many hours a minimum wage employee would need to work to afford a two-bedroom apartment. 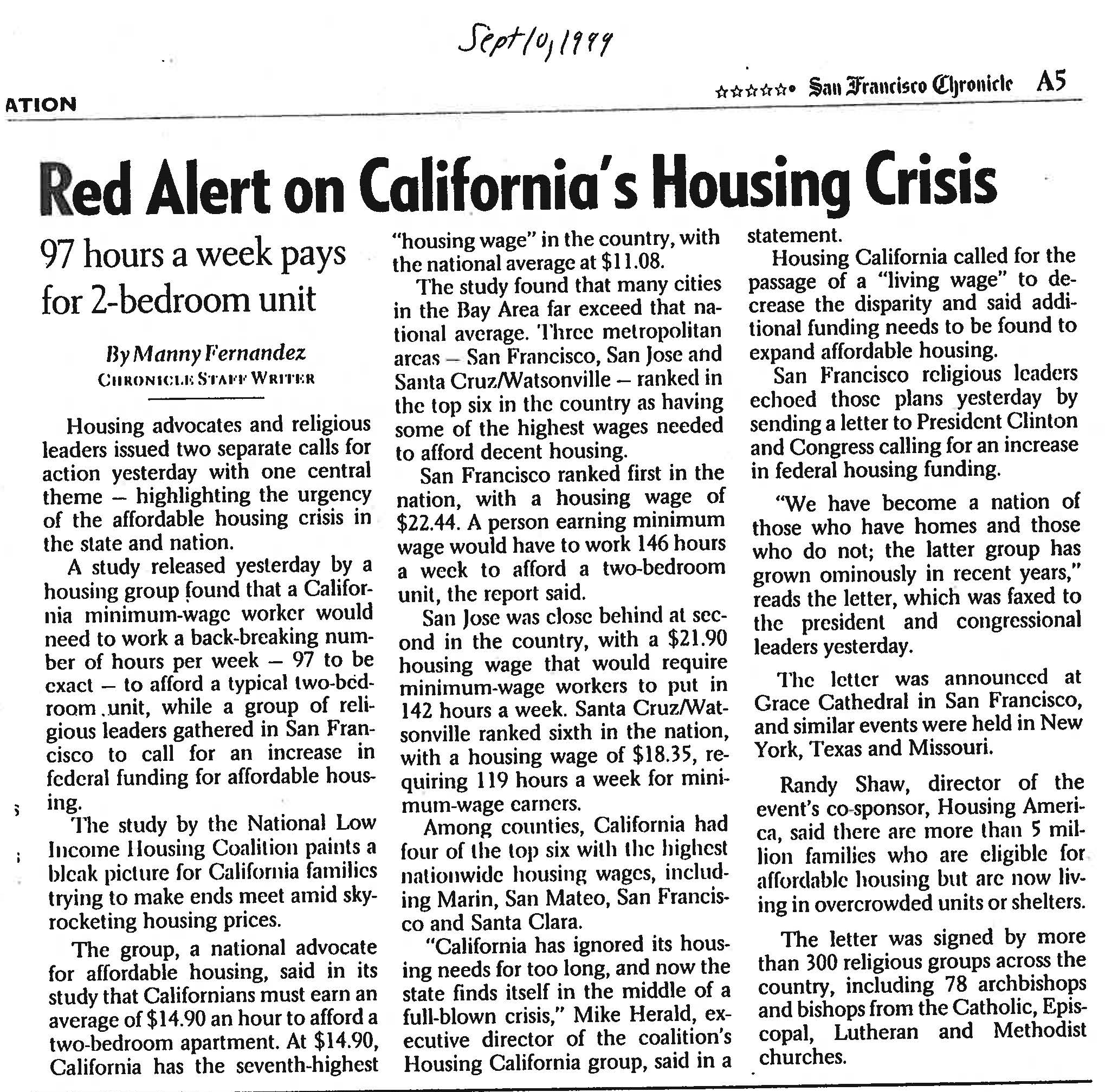 Housing advocates and religious leaders issued two separate calls for action yesterday with one central theme – highlighting the urgency of the affordable housing crisis in the state and nation.

A study released yesterday by a housing group found that a California minimum wage worker would need to work a back-breaking number of hours per week – 97 to be exact – to afford a typical two-bedroom unit, while a group of religious leaders gathered in San Francisco to call for an increase in federal funding for affordable housing.

The group, a national advocate for affordable housing, said in its study that Californians must earn an average of $14.90 an hour to afford a two-bedroom apartment. At $14.90, California has the seventh-highest “housing wage” in the country, with the national average at $11.08.

The study found that many cities in the Bay Area far exceed that national average. Three metropolitan areas – San Francisco, San Jose and Santa Cruz/Watsonville – ranked in the top six in the country as having some of the highest wages needed to afford decent housing.

San Francisco ranked first in the nation, with a housing wage of $22.44. A person earning minimum wage would have to work 146 hours a week to afford a two-bedroom unit, the report said.

Among counties, California had four of the top six with the highest nationwide housing wages, including Marin, San Mateo, San Francisco and Santa Clara.

“California has ignored its housing needs for too long, and now the state finds itself in the middle of a full-blown crisis,” Mike Herald, executive director of the coalition’s Housing California group, said in a statement.

Housing California called for the passage of a “living wage” to decrease the disparity and said additional funding needs to be found to expand affordable housing.

San Francisco religious leaders echoed those plans yesterday by sending a letter to President Clinton and Congress calling for an increase in federal housing funding.

“We have become a nation of those who have homes and those who do not; the latter group has grown ominously in recent years,” reads the letter, which was faxed to the president and congressional leaders yesterday.

The letter was announced at Grace Cathedral in San Francisco, and similar events were held in New York, Texas and Missouri.

Randy Shaw, director of the event’s co-sponsor, Housing America, said there are more than 5 million families who are eligible for affordable housing but are now living in overcrowded units or shelters.

The letter was signed by more than 300 religious groups across the country, including 78 archbishops and bishops from the Catholic, Episcopal, Lutheran and Methodist churches.