Randy Shaw of the Tenderloin Housing Clinic writes to SOMPAC (South of Market Project Area Committee) outlining the issues with the proposed Continental Hotel and its possible impacts on the community. 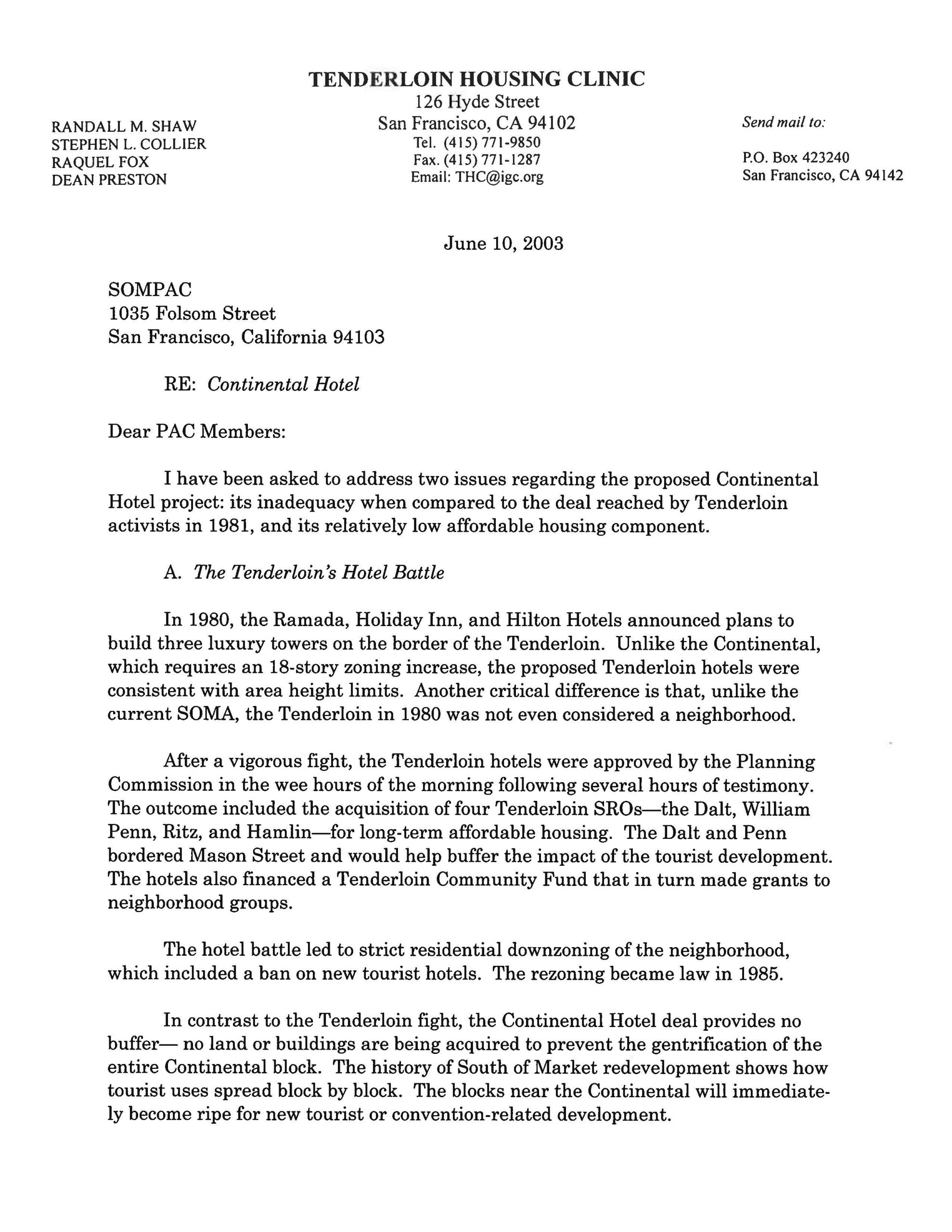 I have been asked to address two issues regarding the proposed Continental Hotel project: its inadequacy when compared to the deal reached by Tenderloin activists in 1981, and its relatively low affordable housing component.

In 1980, the Ramada, Holiday Inn, and Hilton Hotels announced plans to build three luxury towers on the border of the Tenderloin. Unlike the Continental, which requires an 18-story zoning increase, the proposed Tenderloin hotels were consistent with area height limits. Another critical difference is that, unlike the current SOMA, the Tenderloin in 1980 was not even considered a neighborhood.

After a vigorous fight, the Tenderloin hotels were approved by the Planning Commission in the wee hours of the morning following several hours of testimony. The outcome included the acquisition of four Tenderloin SROs—the Dalt, William Penn, Ritz, and Hamlin-for long-term affordable housing. The Dalt and Penn bordered Mason Street and would help buffer the impact of the tourist development. The hotels also financed a Tenderloin Community Fund that in turn made grants to neighborhood groups.

The hotel battle led to strict residential downzoning of the neighborhood, which included a ban on new tourist hotels. The rezoning became law in 1985.

In contrast to the Tenderloin fight, the Continental Hotel deal provides no buffer- no land or buildings are being acquired to prevent the gentrification of the entire Continental block. The history of South of Market redevelopment shows how tourist uses spread block by block.The blocks near the Continental will immediately become ripe for new tourist or convention-related development.

Whereas approval of the Tenderloin hotels paved the way for a residential rezoning, the Continental creates a precedent for developers to seek new zoning exemptions on or around Sixth Street and to circumvent zoning restrictions by reaching financial agreements with various groups.

City law requires the Continental to pay $4.8 million into the city’s affordable housing fund. This sum is inadequate for two reasons. First, none of the funds are earmarked to create an affordable housing buffer on the block bordering Sixth Street. Second, the amount is far too low in light of the eighteen (!) additional stories the developer seeks.

Contrast the Continental contribution with that recently required by the Board of Supervisors in exchange for approving a zoning change for Fourth and Freelon that raised the height limit three stories, from fifty-five to eighty-five feet. In exchange for this thirty-foot increase, the Board required the developer to purchase land, built a 56-unit apartment building, and then transfer title to the land and building to a nonprofit who will rent units at 50% or less of median income. The present value of the developer’s affordable housing contribution has been estimated to be at least $6,000,000. This amount not only exceeds the Continental’s contribution, but will result in a finished building. The Continental funds are insufficient to create a new building and will almost assuredly go to a nonprofit project that would have been built anyway.