Housing advocates attempt to protect SRO tenants from evictions via the Ellis Act. 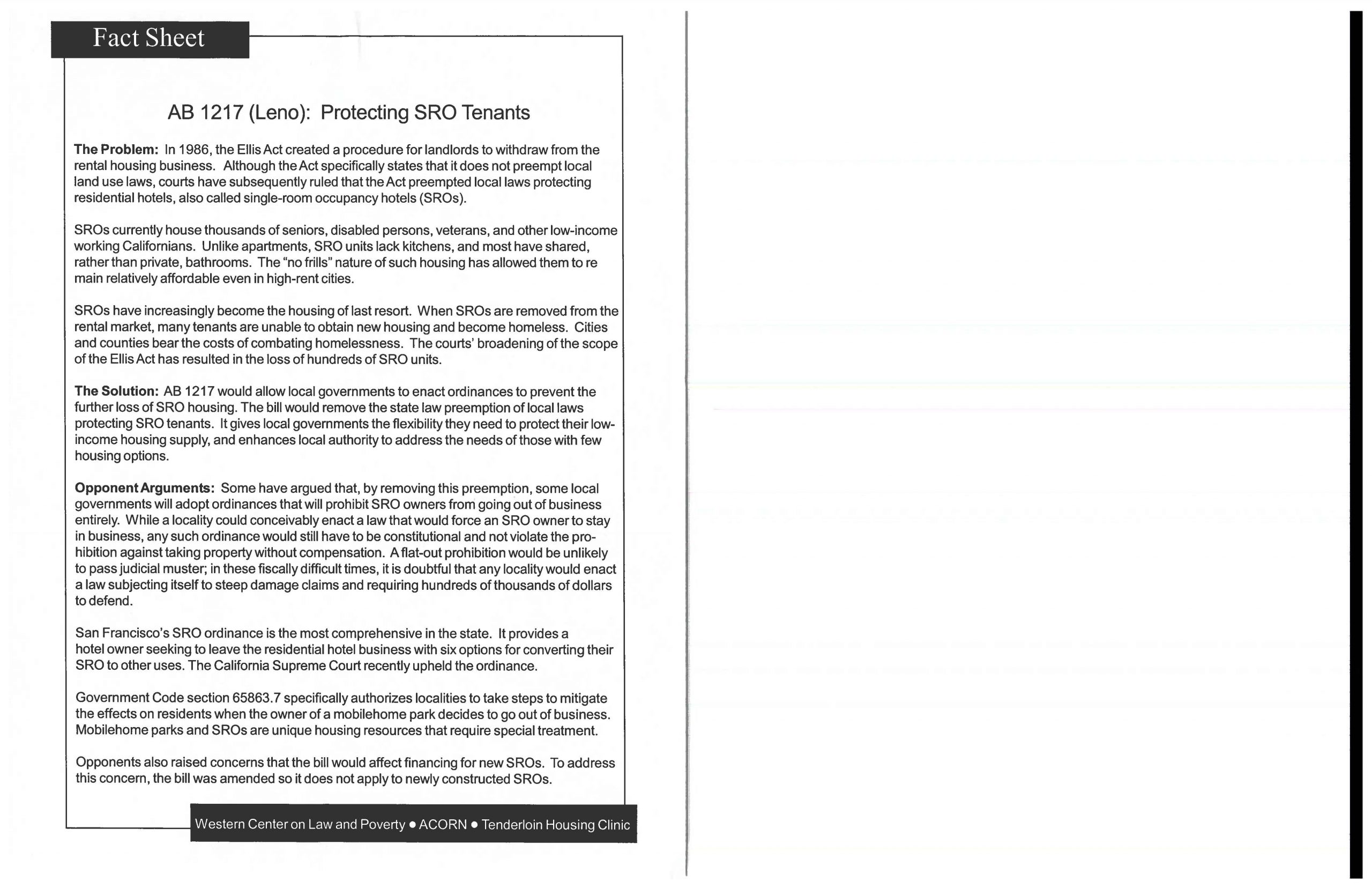 The Problem: In 1986, the Ellis Act created a procedure for landlords to withdraw from the rental housing business. Although the Act specifically states that it does not preempt local land use laws, courts have subsequently ruled that the Act preempted local laws protecting residential hotels, also called single-room occupancy hotels (SROs).

SROs currently house thousands of seniors, disabled persons, veterans, and other low-income working Californians. Unlike apartments, SRO units lack Kitchens, and most have shared, rather than private, bathrooms. The “no frills” nature of such housing has allowed them to remain relatively affordable even in high-rent cities.

SROs have increasingly become the housing of last resort. When SROs are removed from the rental market, many tenants are unable to obtain new housing and become homeless. Cities and counties bear the costs of combating homelessness. The courts’ broadening of the scope of the Ellis Act has resulted in the loss of hundreds of SRO units.

The Solution: AB 1217 would allow local governments to enact ordinances to prevent the further loss of SRO housing. The bill would remove the state law preemption of local laws protecting SRO tenants. It gives local governments the flexibility they need to protect their low income housing supply, and enhances local authority to address the needs of those with few housing options.

Opponent Arguments: Some have argued that, by removing this preemption, some local governments will adopt ordinances that will prohibit SRO owners from going out of business entirely. While a locality could conceivably enact a law that would force an SI in business, any such ordinance would still have to be constitutional and not violate the prohibition against taking property without compensation. A flat-out prohibition would be unlikely to pass judicial muster; in these fiscally difficult times, it is doubtful that any locality would enact a law subjecting itself to steep damage claims and requiring hundreds of thousands of dollars to defend.

San Francisco’s SRO ordinance is the most comprehensive in the state. It provides a hotel owner seeking to leave the residential hotel business with six options for converting their SRO to other uses. The California Supreme Court recently upheld the ordinance.

Government Code section 65863.7 specifically authorizes localities to take steps to mitigate the effects on residents when the owner of a mobile home park decides to go out of business. Mobile home parks and SROs are unique housing resources that require special treatment.

Opponents also raised concerns that the bill would affect financing for new SROs. To address this concern, the bill was amended so it does not apply to newly constructed SROs.