Religious Witness with Homeless People and Housing America call the nation’s lack of affordable housing a “spiritual and moral crisis.” 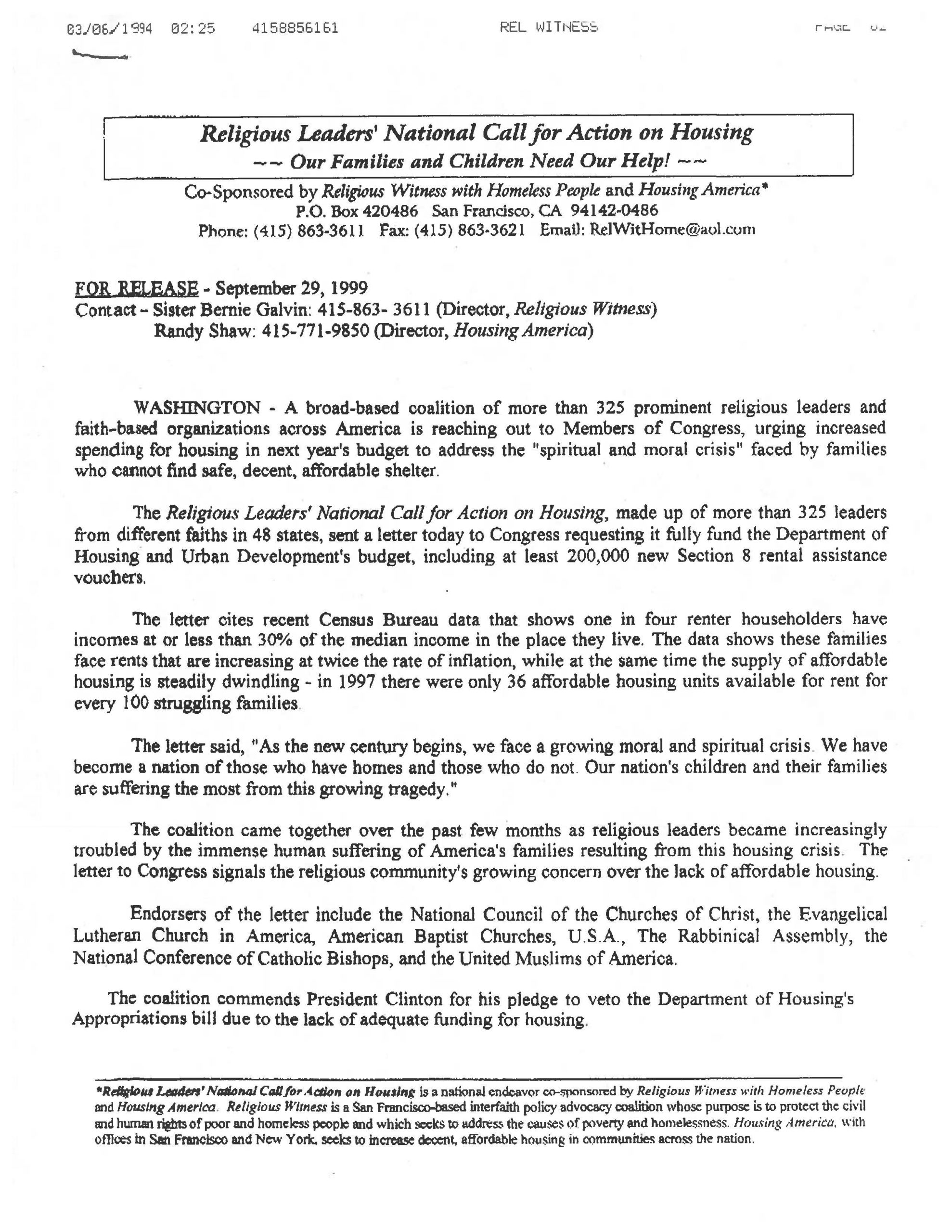 Religious Leaders’ National Call for Action on Housing
Our Families and Children Need Our Help!

Washington – A broad-based coalition of more than 325 prominent religious leaders and faith-based organizations across America is reaching out to Members of Congress, urging increased spending for housing in next year’s budget to address the “spiritual and moral crisis” faced by families who cannot find safe, decent, affordable shelter.

The Religious Leaders’ National Call for Action on Housing, made up of more than 325 leaders from different faiths in 48 states, sent a letter today to Congress requesting it fully fund the Department of Housing and Urban Development’s budget, including at least 200,000 new Section 8 rental assistance vouchers.

The letter cites recent Census Bureau data that shows one in four renter households have incomes at or less than 30% of the median income in the place they live. The data shows these families face rents that are increasing at twice the rate of inflation, while at the same time the supply of affordable housing is steadily dwindling – in 1997 there were only 36 affordable housing units available for rent for every 100 struggling families.

The letter said, “As the new century begins, we face a growing moral and spiritual crisis. We have become a nation of those who have homes and those who do not. Our nation’s children and their families are suffering the most from this growing tragedy.”

The coalition came together over the past few months as religious leaders became increasingly troubled by the immense human suffering of America’s families resulting from this housing crisis. The letter to Congress signals the religious community’s growing concern over the lack of affordable housing.

Endorsers of the letter include the National Council of the Churches of Christ, the Evangelical Lutheran Church in America American Baptist Churches, U.S.A., The Rabbinical Assembly, the National Conference of Catholic Bishops, and the United Muslims of America.

The coalition commends President Clinton for his pledge to veto the Department of Housing’s Appropriations bill due to the lack of adequate funding for housing.

*Religious Leaders’ National Call for Action on Housing is a national endeavor co-sponsored by Religious Witness with Homeless People and Housing America. Religious Witness is a San Francisco-based interfaith policy advocacy coalition whose purpose is to protect the civil and human rights of poor and homeless people and which socks to address the causes of poverty and homelessness. Housing America, with Offices in San Francisco and New York, seeks to increase decent, affordable housing in communities across the nation.