The City looks to take legal action against the plumbers and steamfitters union, after the powerful organization repeatedly refused to install sprinklers in a residential hotel it owns. 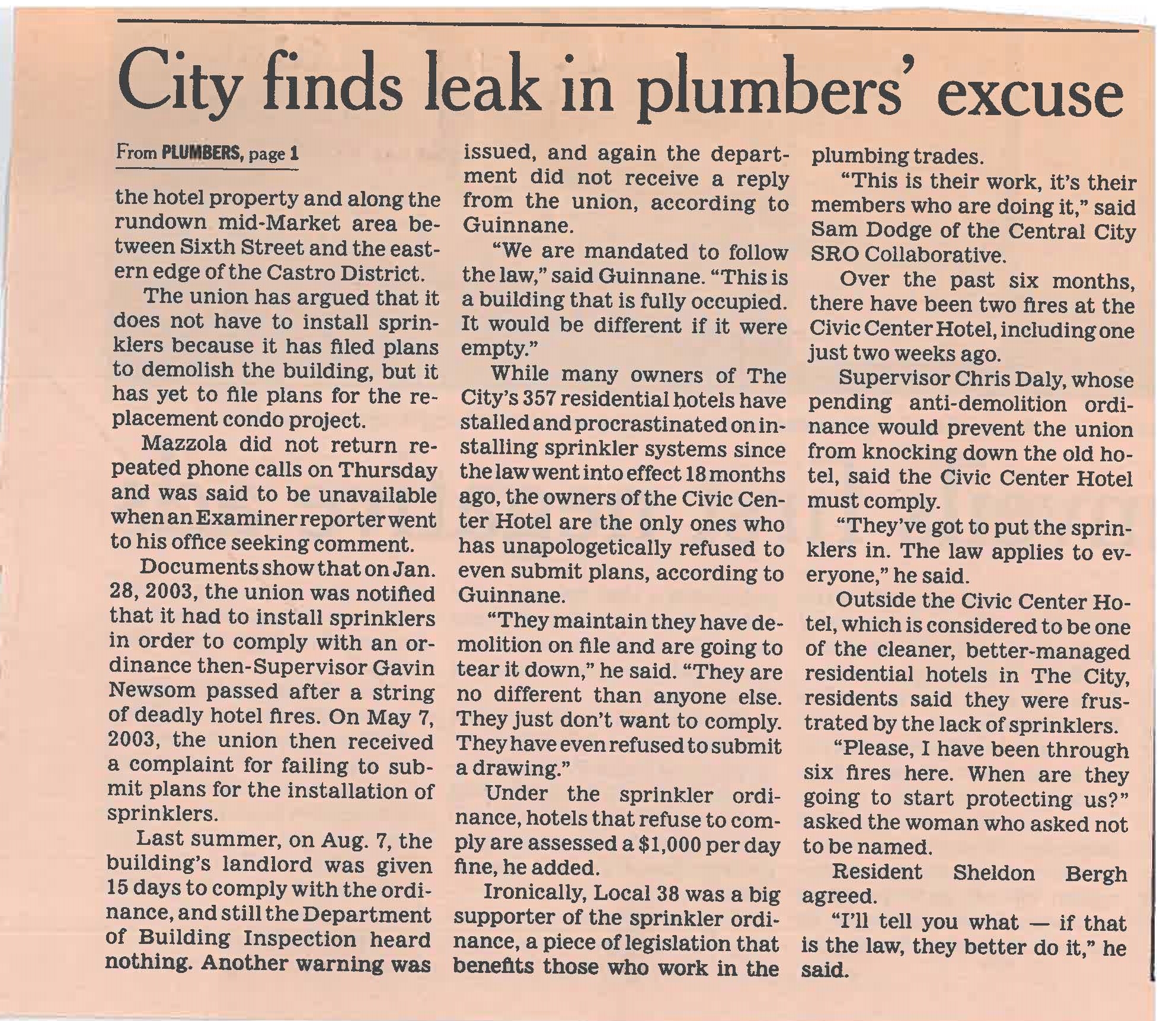 The City will likely take legal action against the plumbers and steamfitters union, United Association Local 38, after the powerful organization repeatedly refused to install sprinklers in a residential hotel it owns on 12th and Market streets.

After months and months of trying to get the union to comply with The City’s residential-hotel sprinkler ordinance, the Department of Building Inspection’s litigation committee referred the matter to the City Attorney’s Office on Monday.

“They have got to comply with the law,” said Building Commissioner Roy Guinnane. “They have so much money, they think they are above the law.”

The Local 38 Pension Fund, headed by the union’s business manager, Larry Mazzola, owns the 156-unit Civic Center Hotel, which is separated from the union’s headquarters by a parking lot.

Over the past few years, a number of real-estate developers, including the plumbers union, have hatched plans to develop condominium towers on.

The hotel property and along the rundown mid-Market area between Sixth Street and the eastern edge of the Castro District.

The union has argued that it does not have to install sprinklers because it has filed plans to demolish the building, but it has yet to file plans for the replacement condo project.

Mazzola did not return repeated phone calls on Thursday and was said to be unavailable when an Examiner reporter went to his office seeking comment.

Documents show that on Jan. 28, 2003, the union was notified that it had to install sprinklers in order to comply with an ordinance then-Supervisor Gavin Newsom passed after a string of deadly hotel fires, on May 7, 2003, the union then received a complaint for failing to submit plans for the installation of sprinklers.

Last summer, on Aug. 7, the building’s landlord was given 15 days to comply with the ordinance, and still the Department of Building Inspection heard nothing. Another warning was issued, and again the department did not receive a reply from the union, according to Guinnane.

“We are mandated to follow the law,” said Guinnane. “This is a building that is fully occupied. It would be different if it were empty.”

While many owners of The City’s 357 residential hotels have stalled and procrastinated on installing sprinkler systems since the law went into effect 18 months ago, the owners of the Civic Center Hotel are the only ones who has unapologetically refused to even submit plans, according to Guinnane.

“They maintain they have demolition on file and are going to tear it down,” he said. “They are no different than anyone else. They just don’t want to comply. They have even refused to submit a drawing.”

Under the sprinkler ordinance, hotels that refuse to comply are assessed a $1,000 per day fine, he added.

Ironically, Local 38 was a big supporter of the sprinkler ordinance, a piece of legislation that benefits those who work in the plumbing trades.

“This is their work, it’s their members who are doing it,” said Sam Dodge of the Central City SRO Collaborative.

Over the past six months, there have been two fires at the Civic Center Hotel, including one just two weeks ago.

Supervisor Chris Daly, whose pending anti-demolition ordinance would prevent the union from knocking down the old hotel, said the Civic Center Hotel must comply.

“They’ve got to put the sprinklers in. the law applies to everyone,” he said.

Outside the Civic Center Hotel, which is considered to be one of the cleaner, better-managed residential hotels in The City, residents said they were frustrated by the lack of sprinklers.

“Please, I have been through six fires here. When are they going to start protecting us?” asked the woman who asked not to be named.