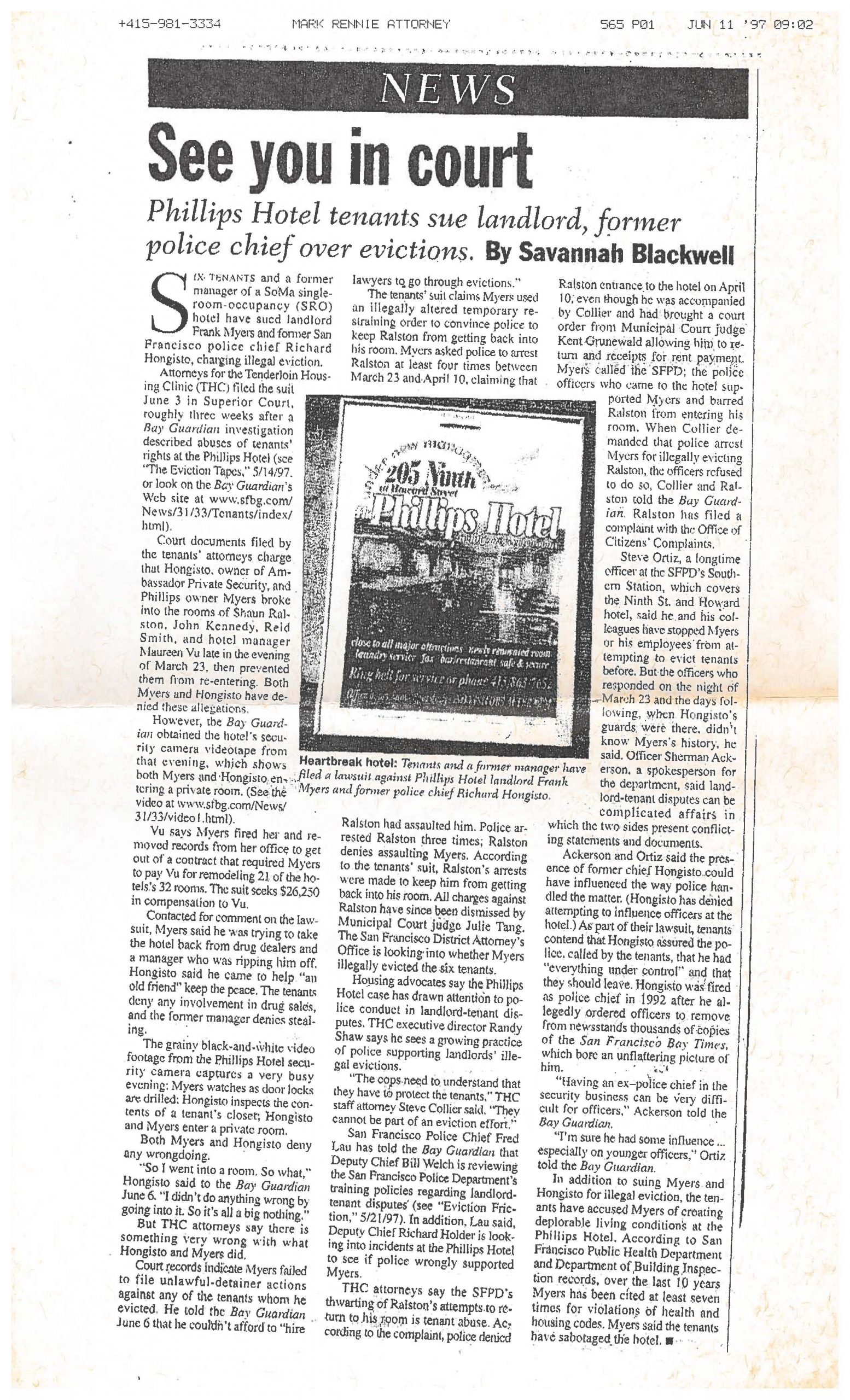 Attorneys for the Tenderloin Housing Clinic (THC) filed the suit June 3 in Superior Court, roughly three weeks after a Bay Guardian investigation described abuses of tenants’ rights at the Phillips Hotel (“The Eviction Tapes,” 5/14/97. Or look on the Bay Guardian’s Website at www.sfbg.com/News/31/33/Tenants/index/html).

Court documents filed by the tenants’ attorneys charge that Hongisto, owner of Ambassador Private Security, and Phillips owner Myers broke into the rooms of Shaun Ralston, John Kennedy, Reid Smith, and hotel manager Maureen Vu late in the evening of March 23, then prevented them from re-entering. Both Myers and Hongisto have denied these allegations.

However, the Bay Guardian obtained the hotel’s security camera videotape from that evening, which shows both Myers and Hongisto entering a private room. (See the video at www.sfbg.com/News/31/33/video1.html).

Vu says Myers fired her and removed records from her office to get out of a contract that required Myers to pay Vu for remodeling 21 of the hotel’s 32 rooms. The suit seeks $26,250 in compensation to Vu.

Contacted for comment on the lawsuit, Myers said he was trying to take the hotel back from drug dealers and a manager who was ripping him off. Hongisto said he came to help “an old friend” keep the peace. The tenants deny any involvement in drug sales, and the former manager denies stealing.

The grainy black-and-white video footage from the Phillips Hotel security camera captures a very busy evening; Myers watches as a door locks are drilled; Hongisto inspects the contents of a tenant’s closet; Hongisto and Myers enter a private room.

Both Myers and Hongisto deny any wrongdoing.

“So I went into a room. So what,” Hongisto said to the Bay Guardian June 6. “I didn’t do anything wrong by going into it. So it’s all a big nothing.”

But THC attorneys say there is something very wrong with what Hongisto and Myers did.

Court records indicate Myers failed to file unlawful-detainer actions against any of the tenants whom he evicted. He told the Bay Guardian June 6 that he couldn’t afford to “hire lawyers to go through evictions.”

The tenants’ suit claims Myers used an illegally altered temporary restraining order to convince police to keep Ralston from getting back into his room. Myers asked police to arrest Ralston at least four times between March 23 and April 10, claiming that Ralston three times; Ralston denies assaulting Myers. According to the tenants’ suit, Ralston’s arrests were made to keep him from getting back into his room. All charges against Ralston have since been dismissed by Municipal Court judge Julie Tang. The San Francisco District Attorney’s Office is looking into whether Myers illegally evicted the six tenants.

“The cops need to understand that they have to protect the tenants,” THC staff attorney Steve Collier said. “They cannot be part of an eviction effort.”

THC attorneys say the SFPD’s thwarting of Ralston’s attempts to return to his room is tenant abuse. According to the complaint police denied Ralston entrance to the hotel on April 10, even though he was accompanied by Collier and had brought a court order from Municipal Court judge Kent Grunewald allowing him to return and receipts for rent payment. Myers called the SFPD; the police officers who came to the hotel supported Myers and barred Ralston from entering his room. When Collier demanded that police arrest Myers for illegally evicting Ralston, the officers refused to do so, Collier and Ralston told the Bay Guardian Ralston had filed a complaint with the Office of Citizens’ Complaints.

Steve Ortiz, a longtime officer at the SFPD’s Southern Station, which covers the Ninth St. and Howard hotel, said he and his colleagues have stopped Myers or his employees from attempting to evict tenants before. But the officers who responded on the night of March 23 and the days following, when Hongisto’s guards were there, didn’t know Myers’s history, he said. Officer Sherman Ackerson, a spokesperson for the department, said landlord-tenant disputes can be complicated affairs in which the two sides present conflicting statements and documents.

Ackerson and Ortiz said the presence of former chief Hongisto could have influenced the way police handled the matter. (Hongisto has denied attempting to influence officers at the hotel.)  As part of their lawsuit, tenants contend that Hongisto assured the police called by the tenants that he had “everything under control” and that they should leave. Hongisto was fired as police chief in 1992 after he allegedly ordered officers to remove from newsstands thousands of copies of the San Francisco Bay Times, which bore an unflattering picture of him.

“Having an ex-police chief in the security business can be very difficult for officers,” Ackerson told the Bay Guardian.

“I’m sure he had some influence, especially on younger officers,” Ortiz told the Bay Guardian.

In addition to suing Myers and Hongisto for illegal eviction, the tenants have accused Myers of creating deplorable living conditions at the Phillips Hotel. According to San Francisco Public Health Department of Building Inspection records, over the last 10 years Myers has been cited at least seven times for violations of health and housing codes. Myers said the tenants have sabotaged the hotel.