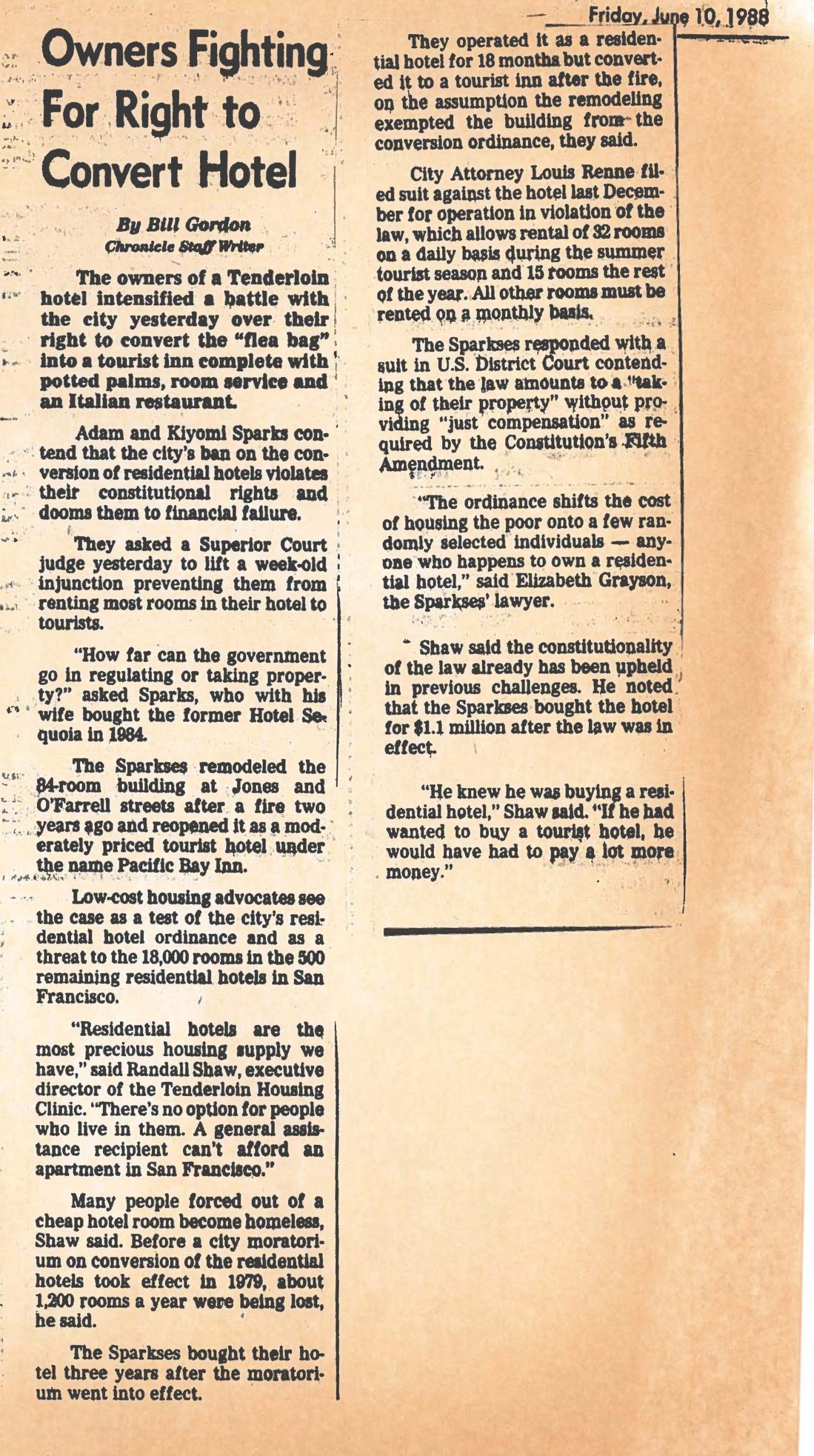 The owners of a Tenderloin hotel intensified a battle with the city yesterday over their right to convert the “flea bag” into a tourist inn complete with potted palms, room service, and an Italian restaurant.

Adam and Kiyomi Sparks contended that the city’s ban on the conversion of residential hotels violates their constitutional rights and dooms them to financial failure. They asked a Superior Court judge yesterday to lift a week-old injunction preventing them from renting most rooms in their hotel to tourists.

“How far can the government go in regulating or taking property?” asked Sparks, who with his wife bought the former Hotel Sequoia in 1984. The Sparkses remodeled the 84-room building at Jones and O’Farrell streets after a fire two years ago and reopened it as a moderately priced tourist hotel under the name Pacific Bay Inn.

“Residential hotels are the most precious housing supply we have,” said Randall Shaw, Executive Director of the Tenderloin Housing Clinic. “There’s no option for people who live in them. A general assistance recipient can’t afford an apartment in San Francisco.” Many people forced out of a cheap hotel room become homeless, Shaw said. Before a city moratorium on conversion of the residential hotels took effect in 1979, about 1,200 rooms a year were being lost, he said.

The Sparkses bought their hotel three years after the moratorium went into effect. They operated it as a residential hotel for 18 months but converted it to a tourist inn after the fire, on the assumption the remodeling exempt the building from the conversion ordinance, they said.

City Attorney Louis Renne filed suit against the hotel last December for operation in violation of the law, which allows rental of 32 rooms on a daily basis during the summer tourist season and 15 rooms the rest of the year. All other rooms must be rented on a monthly basis.

The Sparkes responded with a suit in U.S. District Court contending that the law amounts to a “taking of their property” without providing “just compensation” as required by the Constitution’s Fifth Amendment.

“The ordinance shifts the cost of housing the poor onto a few randomly selected individuals — anyone who happens to own a residential hotel,” said Elizabeth Grayson, the Sparkses’ lawyer.

Shaw said the constitutionality of the law already has been upheld in previous challenges. He noted that the Sparkses bought the hotel for $1.1 million after the law was in effect. “He knew he was buying a residential hotel,” Shaw said. “If he had wanted to buy a tourist hotel, he would have had to pay a lot more money.”