Tenants are removed from there homes a hotel set to be closed by the city hours before the eviction was supposed to take place. Police forcefully removed tenants not allowing them to gather possessions 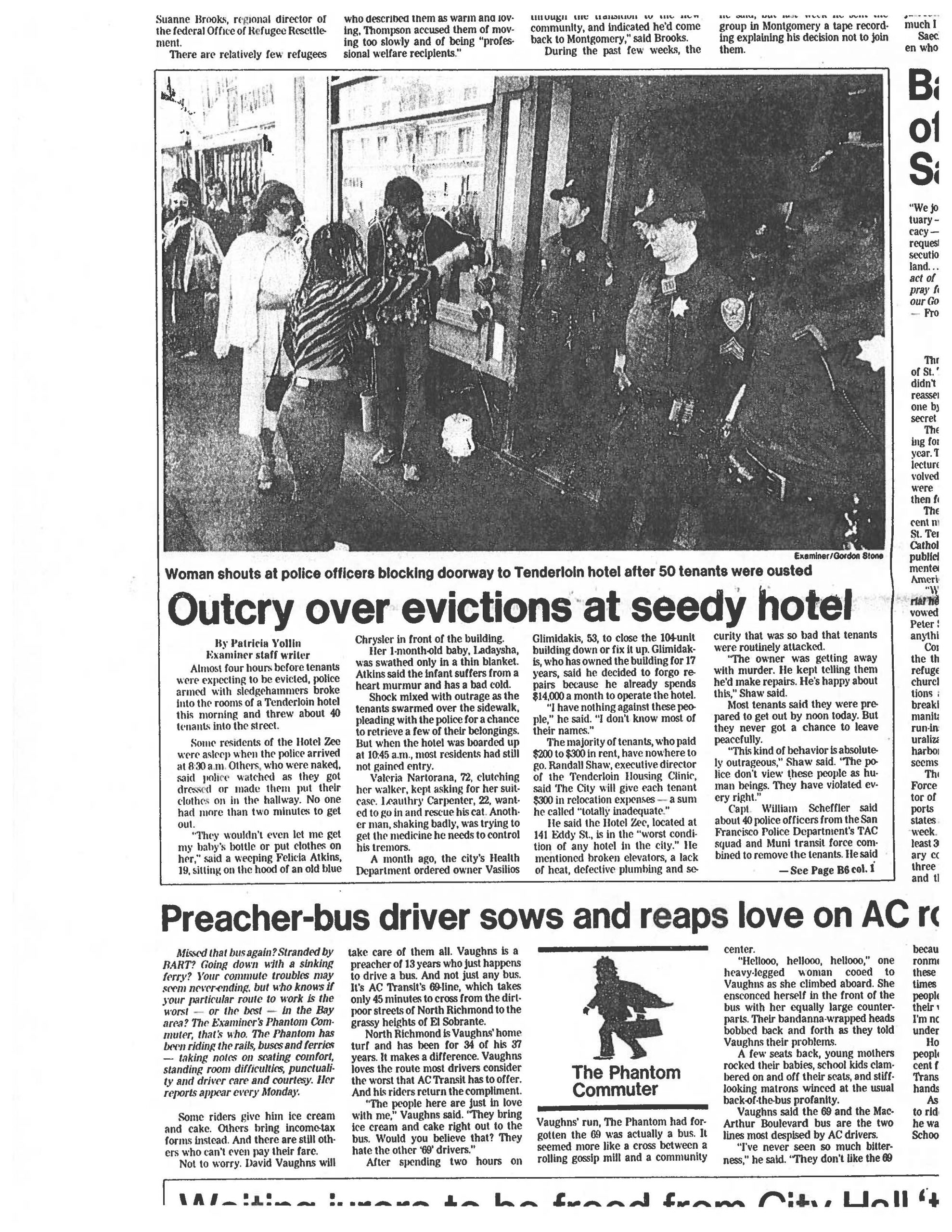 Outcry Over Evictions at Seedy Hotel

Almost four hours before tenants were expecting to be evicted, police armed with sledgehammers broke into the rooms of a Tenderloin hotel this morning and threw about 40 tenants into the street.

Some residents of the Iłotel Zee were asleep when the police arrived at 830 a.m. Others, who were naked, said police watched as they got dressed or made them put their clothes on in the hallway. No one had more than two minutes to get out.

“They wouldn’t even let me get my baby’s bottle or put clothes on her,” said a weeping Felicia Atkins. 19, sitting on the hood of an old blue Chrysler in front of the building.

Her 1-month old baby, Ladaysha, was swathed only in a thin blanket. Atkins said the infant suffers from a heart murmur and has a bad cold.

Shock mixed with outrage as tenants swarmed over the sidewalk, pleading with the police for a chance  to retrieve a few of their belongings.” But when the hotel was boarded up at 10:45 am most residents had still not gained entry.

Valeria Nartorana, 72, clutching her walker, kept asking for her suitcase. Leauthry Carpenter, 22, wanted to go in and rescue his cat. Another man, shaking badly, was trying to get the medicine he needs to control his tremors.

A month ago, the city’s Health Department ordered owner Vasilios Glimidakis, 53, to close the 104-unit building down or fix it up. Glimidakis, who has owned the building for 17 years, said he decided to forgo repairs because he already spends $14,000 a month to operate the hotel.

“I have nothing against these people,” he said. “I don’t know most of their names.”

The majority of tenants, who paid $200 to $300 in rent, have nowhere to go. Randall Shaw, executive director of the Tenderloin Housing Clinic, said The City will give each tenant $300 in relocation expenses — a sum he called “totally inadequate.”

He said the Hotel Zee, located at 141 Eddy St., is in the “worst condition of any hotel in the city.” He mentioned broken elevators, a lack of heat, defective plumbing and security that was so bad that tenants were routinely attacked.

“The owner was getting away with murder. He kept telling them he’d make repairs. He’s happy about this,” Shaw said.

Most tenants said they were prepared to get out by noon today. But they never got a chance to leave peacefully.

“This kind of behavior is absolutely outrageous,” Shaw said. “The police don’t view these people as human beings. They have violated every right.”