A state ruling states that; nonprofit organizations can’t practice law in California unless they’ve registered with the State Bar. Nonprofits grapple with where that leaves them and there ability to enter contingency fee agreements. The issue will go back to trial. 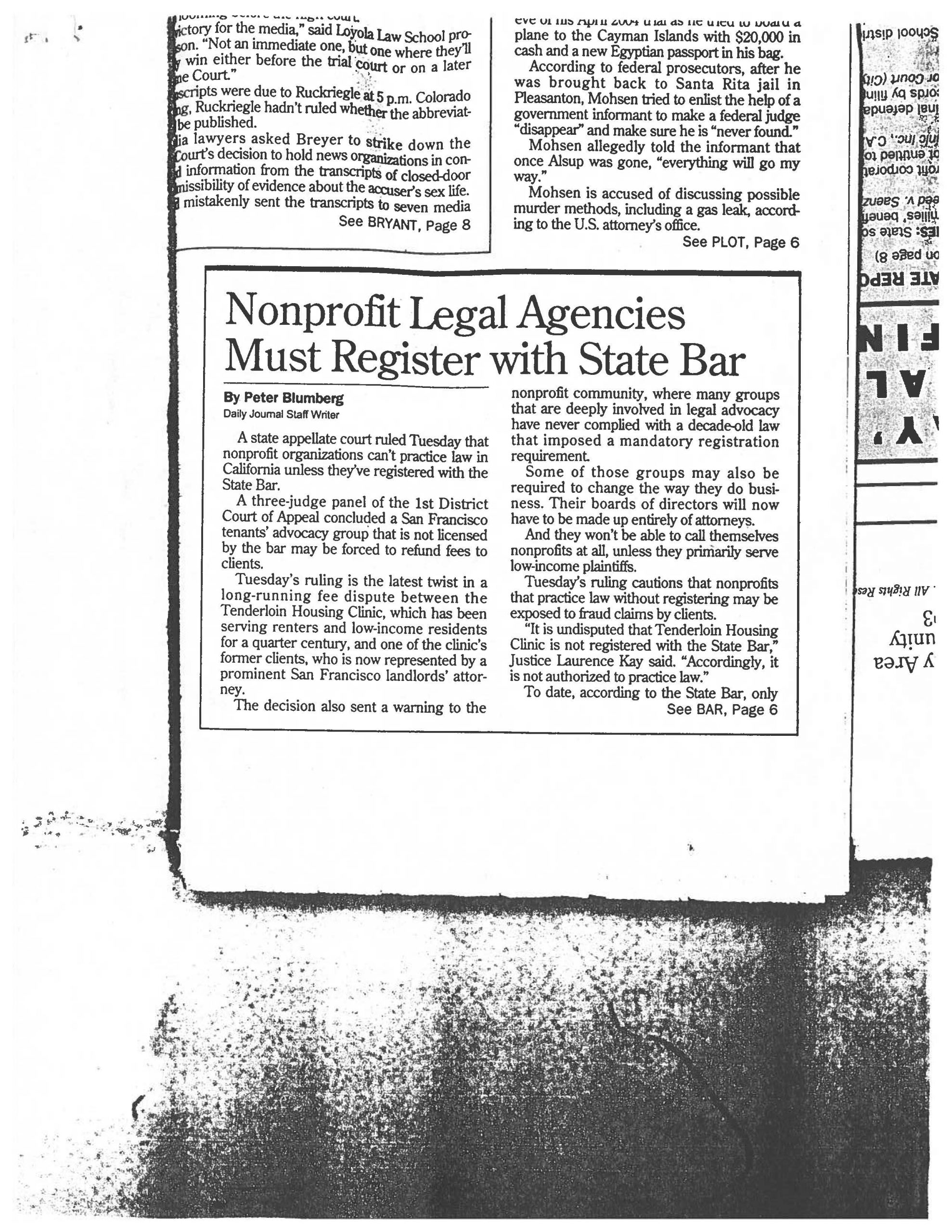 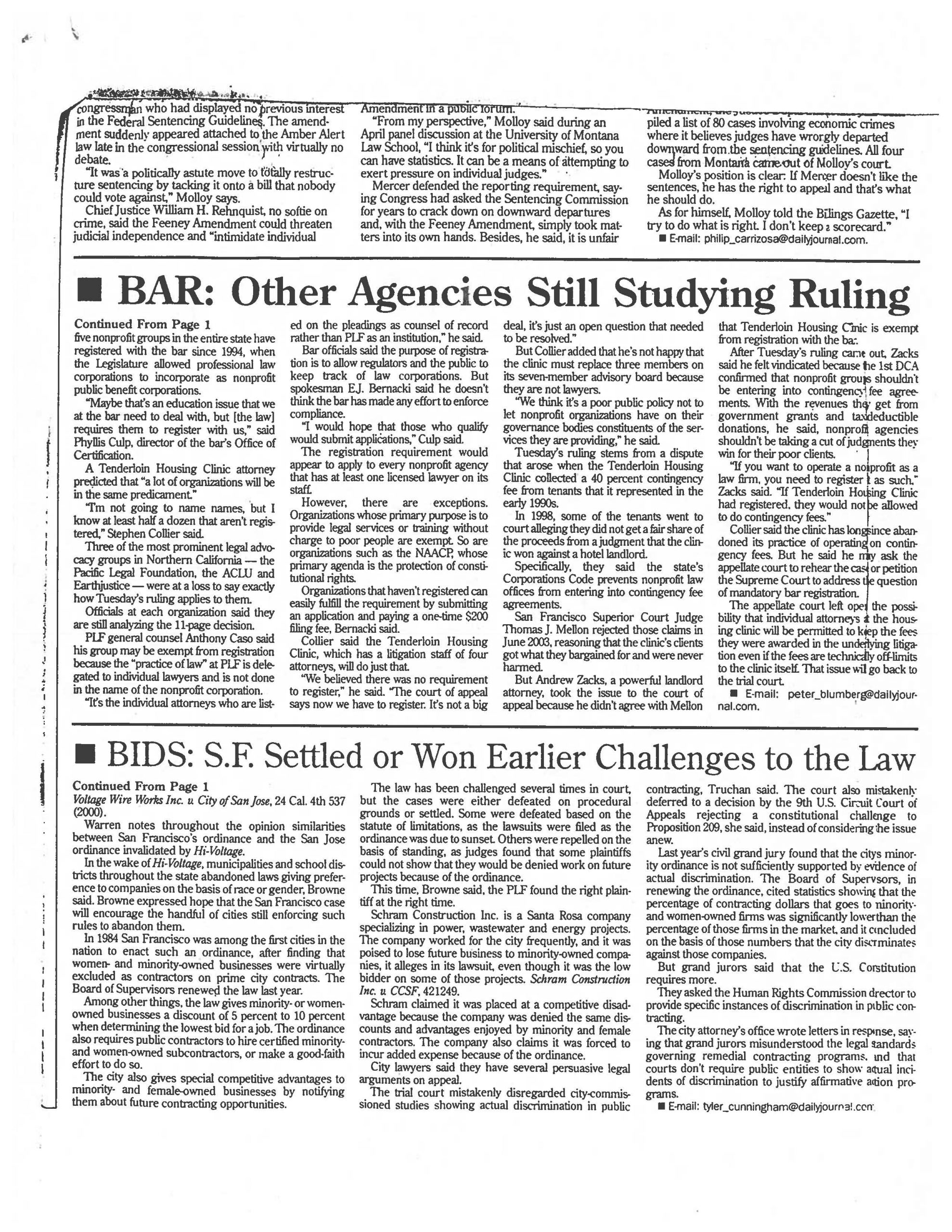 A three-judge panel of the 1st District Court of Appeal concluded a San Francisco tenants’ advocacy group that is not licensed by the bar may be forced to refund fees to clients.

Tuesday’s ruling is the latest twist in a long-running fee dispute between the Tenderloin Housing Clinic, which has been serving renters and low-income residents for a quarter century, and one of the clinic’s former clients, who is now represented by a prominent San Francisco landlords’ attorney.

The decision also sent a warning to the nonprofit community, where many groups that are deeply involved in legal advocacy have never complied with a decade old law that imposed a mandatory registration requirement.

Some of those groups may also be required to change the way they do business. Their boards of directors will now have to be made up entirely of attorneys.

And they won’t be able to call themselves nonprofits at all, unless they primarily serve low-income plaintiffs.

Tuesday’s ruling cautions that nonprofits that practice law without registering may be exposed to fraud claims by clients.

“It is undisputed that Tenderloin Housing Clinic is not registered with the State Bar,” Justice Laurence Kay said. “Accordingly, it is not authorized to practice law.”

To date, according to the State Bar, only five nonprofit groups in the entire state have registered with the bar since 1994, when the Legislature allowed professional law corporations to incorporate as nonprofit public benefit corporations.

“Maybe that’s an education issue that we at the bar need to deal with, but (the law] requires them to register with us,” said Phyllis Culp, director of the bar’s Office of Certification

A Tenderloin Housing Clinic attorney predicted that “a lot of organizations will be in the same predicament.”

“I’m not going to name names, but I know at least half a dozen that aren’t registered,” Stephen Collier said.

Three of the most prominent legal advocacy groups in Northern California – the Pacific Legal Foundation, the ACLU and Earthjustice — were at a loss to say exactly how Tuesday’s ruling applies to them.

Officials at each organization said they are still analyzing the 11-page decision.

PLF general counsel Anthony Caso said his group may be exempt from registration because the “practice of law” at PLF is delegated to individual lawyers and is not done in the name of the nonprofit corporation.

“It’s the individual attorneys who are listed on the pleadings as counsel of record rather than PLF as an institution,” he said

Bar officials said the purpose of registration is to allow regulators and the public to keep track of law corporations. But spokesman EJ. Bernacki said he doesn’t think the bar has made any effort to enforce compliance.

“I would hope that those who qualify would submit applications,” Culp said.

The registration requirement would appear to apply to every nonprofit agency that has at least one licensed lawyer on its staff.

However, there are exceptions. Organizations whose primary purpose is to provide legal services or training without charge to poor people are exempt. So are organizations such as the NAACP, whose primary agenda is the protection of constitutional rights.

Organizations that haven’t registered can easily fulfill the requirement by submitting an application and paying a one-time $200 filing fee, Bernacki said.

Collier said the Tenderloin Housing Clinic, which has a litigation staff of four attorneys, will do just that.

“We believed there was no requirement to register,” he said. “The court of appeal says now we have to register. It’s not a big deal, it’s just an open question that needed to be resolved.”

But Collier added that he’s not happy that the clinic must replace three members on its seven-member advisory board because they are not lawyers.

“We think it’s a poor public policy not to let nonprofit organizations have on their governance bodies constituents of the services they are providing,” he said.

Tuesday’s ruling stems from a dispute that arose when the Tenderloin Housing Clinic collected a 40 percent contingency fee from tenants that it represented in the early 1990s.

In 1998, some of the tenants went to court alleging they did not get a fair share of the proceeds from a judgment that the clinic won against a hotel landlord.

San Francisco Superior Court Judge Thomas J. Mellon rejected those claims in June 2003, reasoning that the clinic’s clients got what they bargained for and were never harmed.

But Andrew Zacks, a powerful landlord attorney, took the issue to the court of appeal because he didn’t agree with Mellon that Tenderloin Housing Clinic is exempt from registration with the bar.

After Tuesday’s ruling came out, Zacks said he felt vindicated because the 1st DCA confirmed that nonprofit groups shouldn’t be entering into contingency fee agreements. With the revenues to get from government grants and tax deductible donations, he said, nonprofit agencies shouldn’t be taking a cut of judgments they win for their poor clients.

“If you want to operate a nonprofit as a law firm, you need to register as such.” Zacks said. “If Tenderloin Housing Clinic had registered, they would not be allowed to do contingency fees.”

Collier said the clinic has long since abandoned its practice of operating on contingency fees. But he said he may ask the appellate court to rehear the case or petition the Supreme Court to address the question of mandatory bar registration.

The appellate court left open the possibility that individual attorneys & the housing clinic will be permitted to keep the fees they were awarded in the underlying litigation even if the fees are technically off-limits to the clinic itself. That issue will go back to the trial court.