A residential hotel being turned into a hostel is halted after lawsuits from Tenderloin Housing Clinic over the illegal conversion. 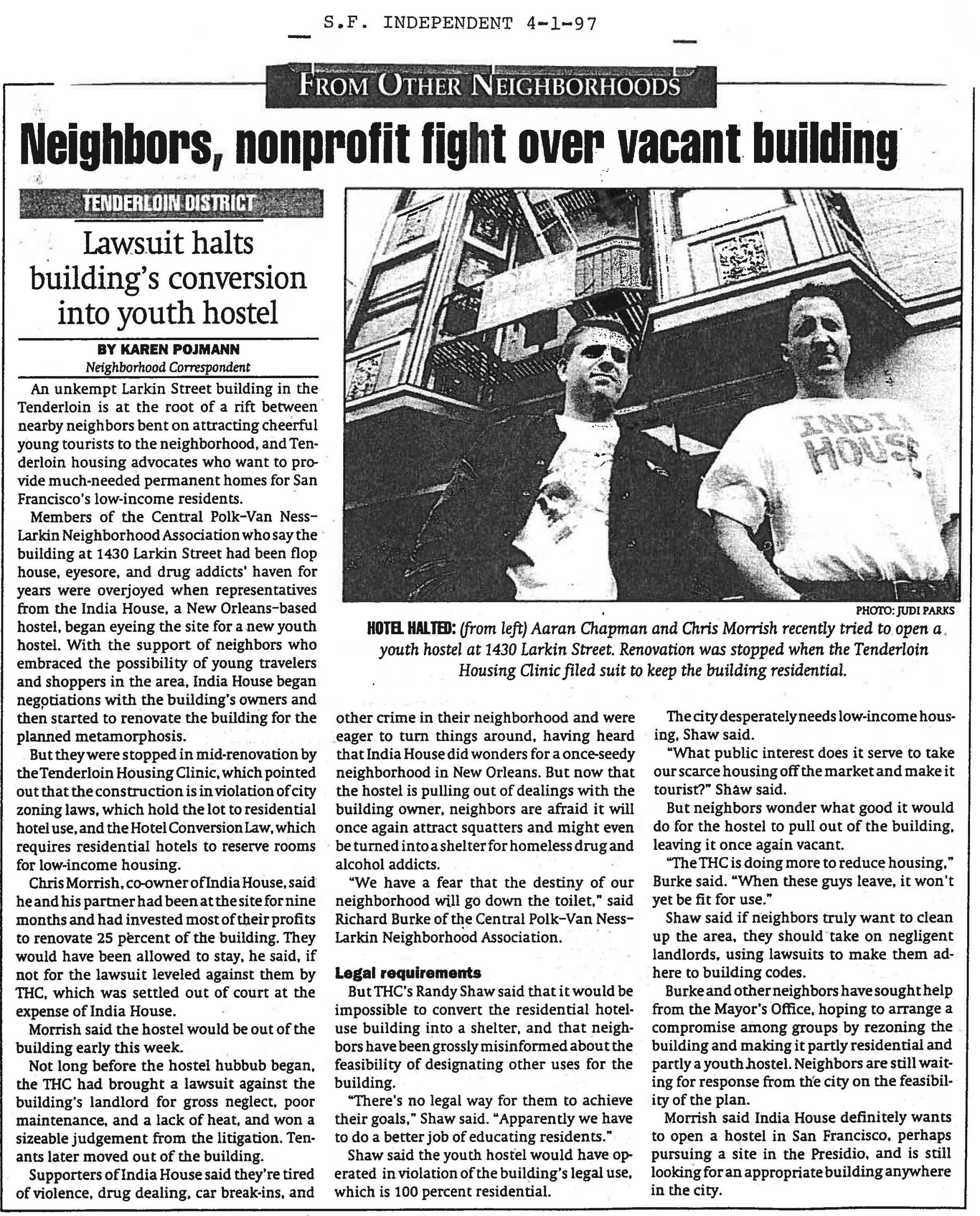 An unkempt Larkin Street building in the Tenderloin is at the root of a rift between nearby neighbors bent on attracting cheerful young tourists to the neighborhood, and Tenderloin housing advocates who want to provide much-needed permanent homes for San Francisco’s low-income residents.

Members of the Central Polk-Van Ness Larkin Neighborhood Association who say the building at 1430 Larkin Street had been flop house, eyesore, and drug addicts’ haven for years were overjoyed when representatives from the India House, a New Orleans-based hostel, began eyeing the site for a new youth hostel. With the support of the neighbors who embraced the possibility of young travelers and shoppers in the area, India House began negotiations with the building’s owners and then started to renovate the building for the planned metamorphosis.

But they were stopped in mid-renovation by the Tenderloin Housing Clinic, which pointed out that the construction is in violation of city zoning laws, which hold the lot to residential hotel use, and the Hotel Conversion Law, which requires residential hotels to reserve rooms for low-income housing.

Chris Morrish, co-owner of India House, said he and his partner had been at the site for nine months and had invested most of their profits to renovate 25 percent of the building. They would have been allowed to stay, he said, if not for the lawsuit leveled against them by THC, which was settled out of court at the expense of India House.

Morrish said the hostel would be out of the building early this week.

Not long before the hostel hubbub began, the THC had brought a lawsuit against the building’s landlord for gross neglect, poor maintenance, and a lack of heat, and won a sizable judgment from the litigation. Tenants later moved out of the building.

Supporters of India House said they’re tired of violence, drug dealing, car break-ins, and other crime in their neighborhood and were eager to turn things around, having heard that India House did wonders for a once-seedy neighborhood in New Orleans. But now that the hostel is pulling out of dealings with the building owner, neighbors are afraid it will once again attract squatters and might even be turned into a shelter for homeless drug and alcohol addicts.

“We have a fear that the destiny of our neighborhood will go down the toilet,” said Richard Bruke of the Central Polk – Van Ness – Larkin Neighborhood Association.

But THC’s Randy Shaw said that it would be impossible to convert the residential hotel use building into a shelter, and that neighbors have been grossly misinformed about the feasibility of designating other uses for the building.

“There’s no legal way for them to achieve their goals,” Shaw said. “Apparently we have to do a better job of educating residents.”

Shaw said the youth hostel would have operated in violation of the building’s legal use, which is 100 percent residential.

“What public interest does it serve to take our scarce housing off the market and make it tourist?” Shaw said.

But neighbors wonder what good it would do for the hostel to pull out of the building. Leaving it once again vacant.

“The THC is doing more to reduce housing,” Burke said. “When these guys leave, it won’t yet be fit for use.”

Shaw said if neighbors truly want to clean up the area, they should take on negligent landlords, using lawsuits to make them adhere to building codes.

Burke and other neighbors have sought help from the Mayor’s Office, hoping to arrange a compromise among groups by rezoning the building and making it partly residential and partly a youth hostel. Neighbors are still waiting for response from the city on the feasibility of the plan.

Morrish said India House definitely wants to open a hostel in San Francisco, perhaps pursuing a site in the Persidio, and is still looking for an appropriate building anywhere in the city.