After only 6 months since the start of the Modified Payment Program, more than 900 clients were receiving permanent housing in 37 hotels participating in the Program. 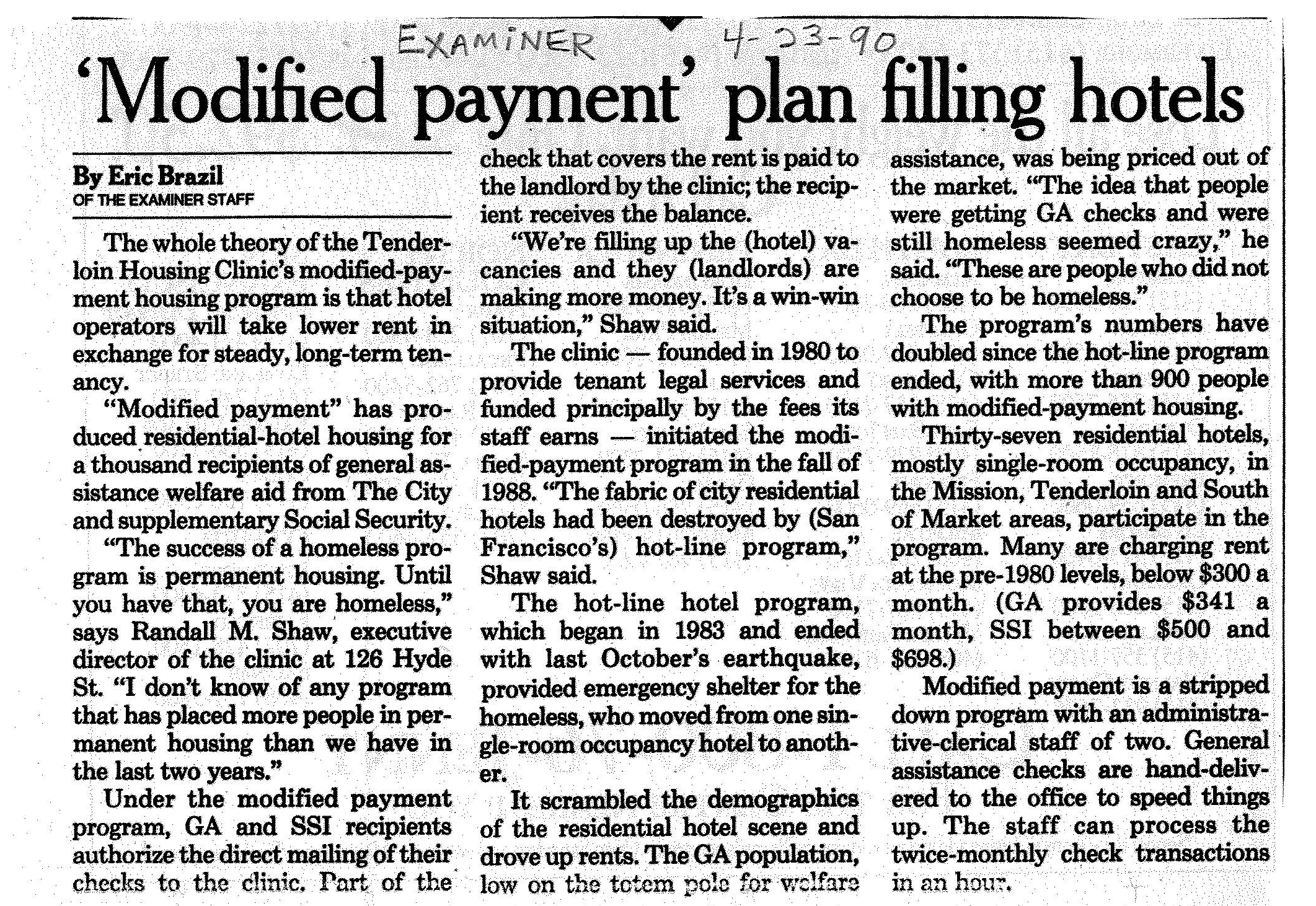 By Eric Brazil
Of The Examiner Staff

The whole theory of the Tenderloin Housing Clinic’s modified-payment housing program is that hotel operators will take lower rent in exchange for steady, long-term tenancy.

“Modified payment” has produced residential-hotel housing for a thousand recipients of general assistance welfare aid from The City and supplementary Social Security.

“The success of a homeless program is permanent housing. Until you have that, you are homeless,” says Randall M. Shaw, Executive Director of the Clinic at 126 Hyde St. “I don’t know of any program that has placed more people in permanent housing than we have in the last two years.”

Under the Modified Payment Program, GA and SSI recipients authorized the direct mailing of their checks to the Clinic. Part of the check that covers the rent is paid to the landlord by the Clinic; the recipient receives the balance.

“We’re filling up the (hotel) vacancies and they (landlords) are making more money. It’s a win-win situation.” Shaw said.

The Clinic — founded in 1980 to provide tenant legal services and funded principally by the fees its staff earns — initiated the modified-payment program in the fall of 1988. “The fabric of city residential hotels had been destroyed by (San Francisco’s) hot-line program,” Shaw said.

The hot-line hotel program, which began in 1983 and ended with last October’s earthquake, provided emergency shelter for the homeless, who moved from one single-room occupancy hotel to another.

It scrambled the demographics of the residential hotel scene and drove up rents. The GA population, low on the totem pole for welfare assistance, was being priced out of the market. “The idea that people were getting GA checks and were still homeless seemed crazy,” he said. “These are people who did not choose to be homeless.”

The program’s numbers have doubled since the hot-line program ended, with more than 900 people with modified-payment housing.

Thirty-seven residential hotels, mostly single-room occupancy, in the Mission, Tenderloin, and South of Market areas, participate in the program. Many are charging rent at the pre-1980 levels, below $300 a month. (GA provides $341 a month, SSI between $500 and $698.)

Modified payment is a stripped down program with an administrative clerical staff of two. General assistance checks are hand-delivered to the office to speed things up. The staff can process the twice-monthly check transactions in an hour.