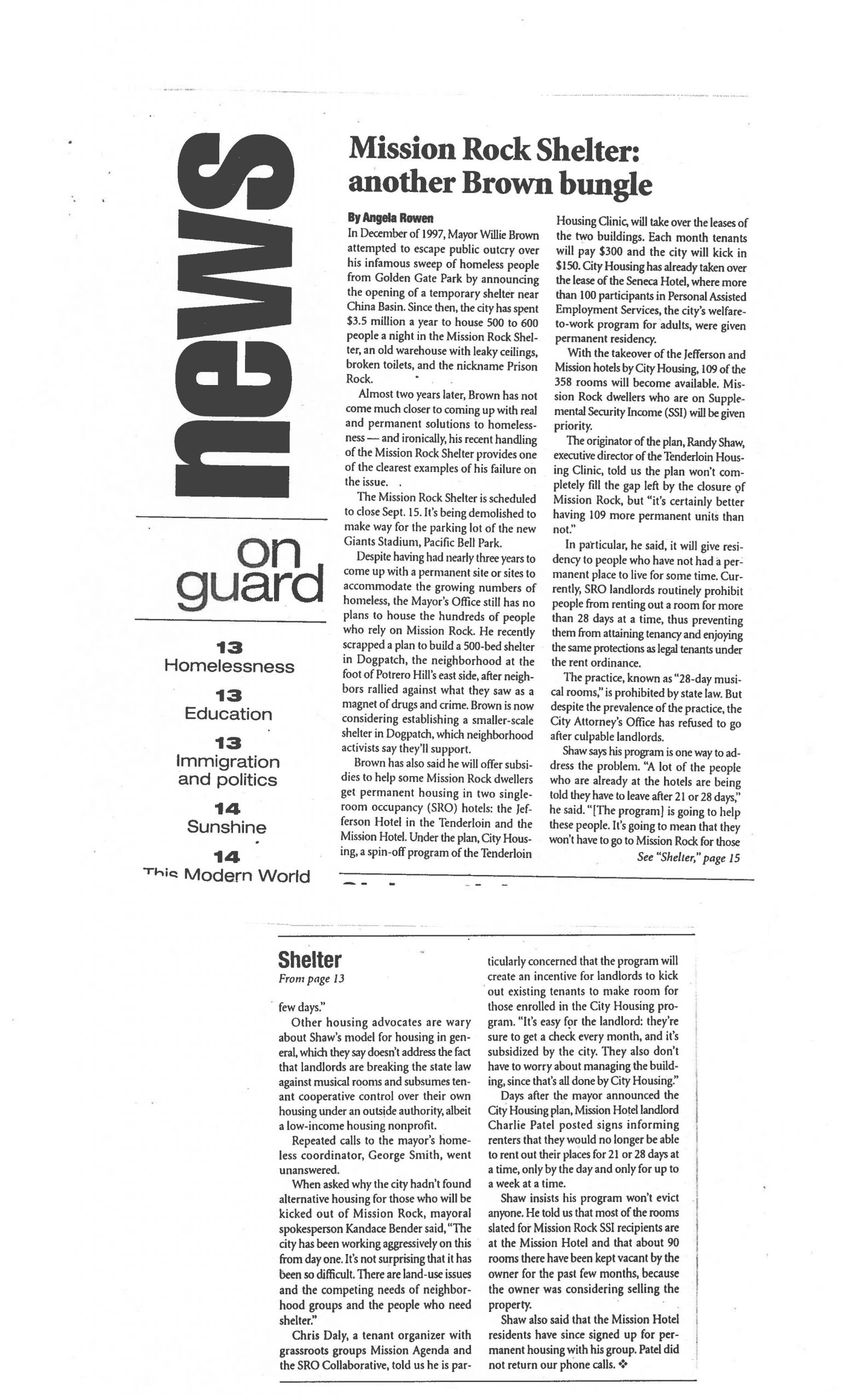 In December of 1997, Mayor Willie Brown attempted to escape public outcry over his infamous sweep of homeless people from Golden Gate Park by announcing the opening of a temporary shelter near China Basin. Since then, the city has spent $3.5 million a year to house 500 to 600 people a night in the Mission Rock Shelter, an old warehouse with leaky ceilings, broken toilets, and the nickname Prison Rock.

Almost two years later, Brown has not come much closer to coming up with real and permanent solutions to homelessness — and ironically, his recent handling of the Mission Rock Shelter provides one of the clearest examples of his failure on the issue.

The Mission Rock Shelter is scheduled to close Sept. 15. It’s being demolished to make way for the parking lot of the new Giants Stadium, Pacific Bell Park.

Despite having had nearly three years to come up with a permanent site or sites to accommodate the growing numbers of homeless, the Mayor’s Office still has no plans to house the hundreds of people who rely on Mission Rock. He recently scrapped a plan to build a 500-bed shelter in Dogpatch, the neighborhood at the foot of Potrero Hill’s east side, after neigh- bors rallied against what they saw as a magnet of drugs and crime. Brown is now considering establishing a smaller-scale shelter in Dogpatch, which neighborhood activists say they’ll support.

Brown has also said he will offer subsidies to help some Mission Rock dwellers get permanent housing in two single- room occupancy (SRO) hotels: the Jefferson Hotel in the Tenderloin and the Mission Hotel. Under the plan, City Housing, a spin-off program of the Tenderloin Housing Clinic, will take over the leases of the two buildings. Each month tenants will pay $300 and the city will kick in $150. City Housing has already taken over the lease of the Seneca Hotel, where more than 100 participants in Personal Assisted Employment Services, the city’s welfare-to-work program for adults, were given permanent residency.

With the takeover of the Jefferson and Mission hotels by City Housing, 109 of the 358 rooms will become available. Mission Rock dwellers who are on Supplemental Security Income (SSI) will be given priority.

The originator of the plan, Randy Shaw, executive director of the Tenderloin Housing Clinic, told us the plan won’t completely fill the gap left by the closure of Mission Rock, but “it’s certainly better having 109 more permanent units than not.”

In particular, he said, it will give residency to people who have not had a permanent place to live for some time. Currently, SRO landlords routinely prohibit people from renting out a room for more than 28 days at a time, thus preventing them from attaining tenancy and enjoying the same protections as legal tenants under the rent ordinance.

The practice, known as “28-day musical rooms,” is prohibited by state law. But despite the prevalence of the practice, the City Attorney’s Office has refused to go after culpable landlords.

Shaw says his program is one way to address the problem. “A lot of the people who are already at the hotels are being told they have to leave after 21 or 28 days,” he said. “[The program) is going to help these people. It’s going to mean that they won’t have to go to Mission Rock for those few days.”

Other housing advocates are wary about Shaw’s model for housing in general, which they say doesn’t address the fact that landlords are breaking the state law against musical rooms and subsumes tennant cooperative control over their own housing under an outside authority, albeit a low-income housing nonprofit.

When asked why the city hadn’t found alternative housing for those who will be kicked out of Mission Rock, mayoral spokesperson Kandace Bender said, “The city has been working aggressively on this from day one. It’s not surprising that it has been so difficult. There are land-use issues and the competing needs of neighborhood groups and the people who need shelter.”

Chris Daly, a tenant organizer with grassroots groups Mission Agenda and the SRO Collaborative, told us he is particularly concerned that the program will create an incentive for landlords to kick out existing tenants to make room for those enrolled in the City Housing program. “It’s easy for the landlord: they’re sure to get a check every month, and it’s subsidized by the city. They also don’t have to worry about managing the building, since that’s all done by City Housing.”

Days after the mayor announced the City Housing plan, Mission Hotel landlord Charlie Patel posted signs informing renters that they would no longer be able to rent out their places for 21 or 28 days at a time, only by the day and only for up to a week at a time.

Shaw insists his program won’t evict anyone. He told us that most of the rooms slated for Mission Rock SSI recipients are at the Mission Hotel and that about 90 rooms there have been kept vacant by the owner for the past few months, because the owner was considering selling the property.

Shaw also said that the Mission Hotel residents have since signed up for permanent housing with his group. Patel did not return our phone calls.