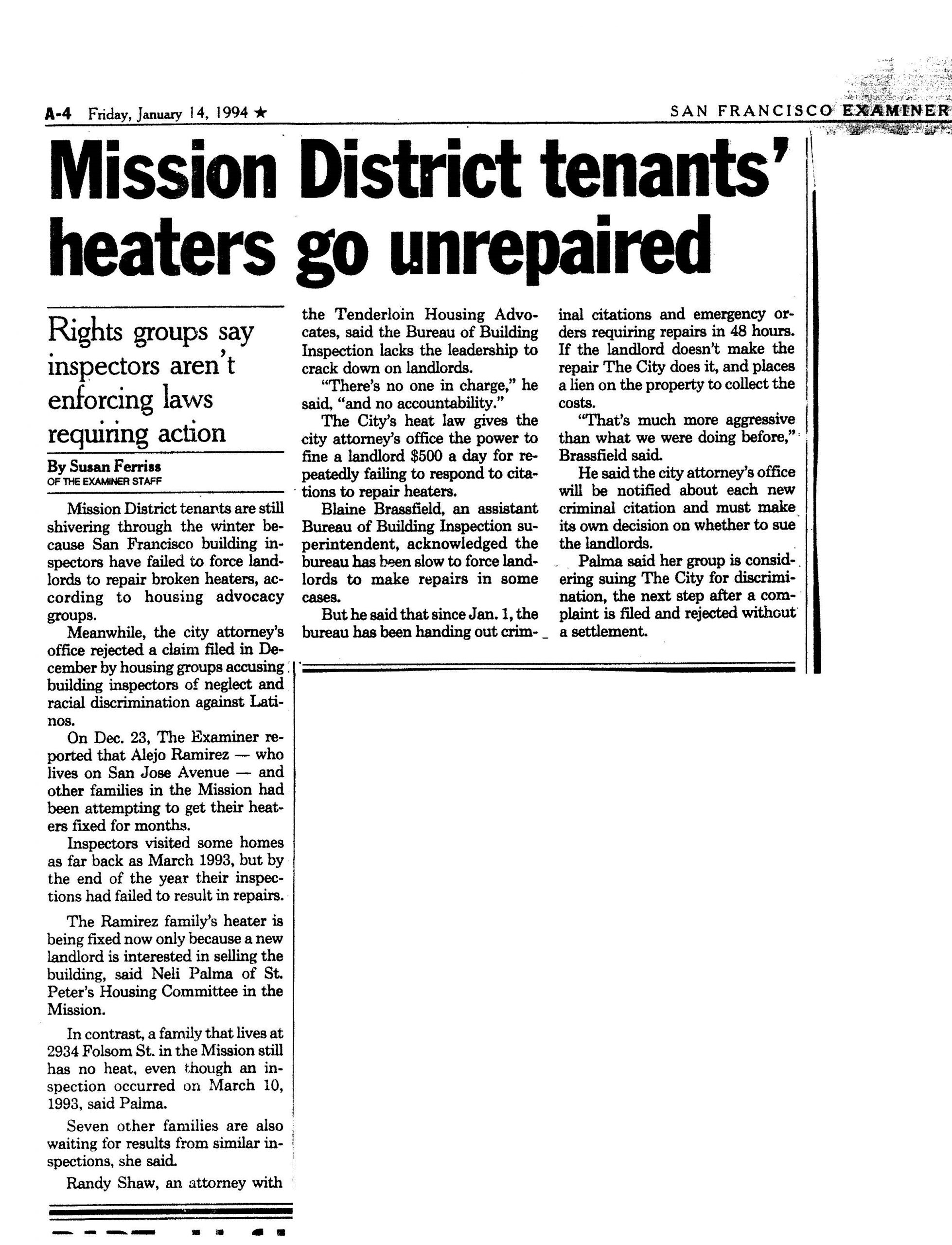 Mission District tenants are still shivering through the winter because San Francisco building inspectors have failed to force landlords to repair broken heaters, according to housing advocacy groups.

On Dec. 23, The Examiner reported that Alejo Ramirez — who lives on San Jose Avenue — and other families in the Mission had been attempting to get their heaters fixed for months.

Inspectors visited some homes as far back as March 1993, but by the end of the year their inspections had failed to result in repairs.

The Ramirez family’s heater is being fixed now only because a new landlord is interested in selling the building , said Neli Palma of St. Peter’s Housing Committee in the Mission.

In contrast, a family that lives at 2934 Folsom St. in the Mission still has no heat, even though an inspection occurred on March 10, 1993, said Palma.

Seven other families are also waiting for results from similar inspections, she said.

Randy Shaw, an attorney with the Tenderloin Housing Advocates, said the Bureau of Building Inspection lacks the leadership to crack down on landlords.

“There’s no one in charge,” he said, “and no accountability.”

The City’s heat law gives the city attorney’s office the power to fine a landlord $500 a day for repeated failing to respond to citations to repair heaters.

Blaine Brassfield, an assistant Bureau of Building Inspection superintendent, acknowledged the bureau has been slow to force landlords to make repairs in some cases.

But he said that since Jan. 1, the bureau has been handing out criminal citations and emergency orders requiring repairs in 48 hours. If the landlord doesn’t make the repair The City does it, and places a lien on the lien on the property to collect the costs.

“That’s much more aggressive than what we were doing before,” Brassfield said.

He said the city attorney’s office will be notified about each new criminal citation and must make its own decision on whether to sue the landlords.

Palma said her group is considered suing The City for discrimination, the next step after a complaint is filed and rejected without a settlement.