The Mission Hotel makes a turn for the better, with the help of Tenderloin Housing Clinic the hotel plans on continuing in this direction. 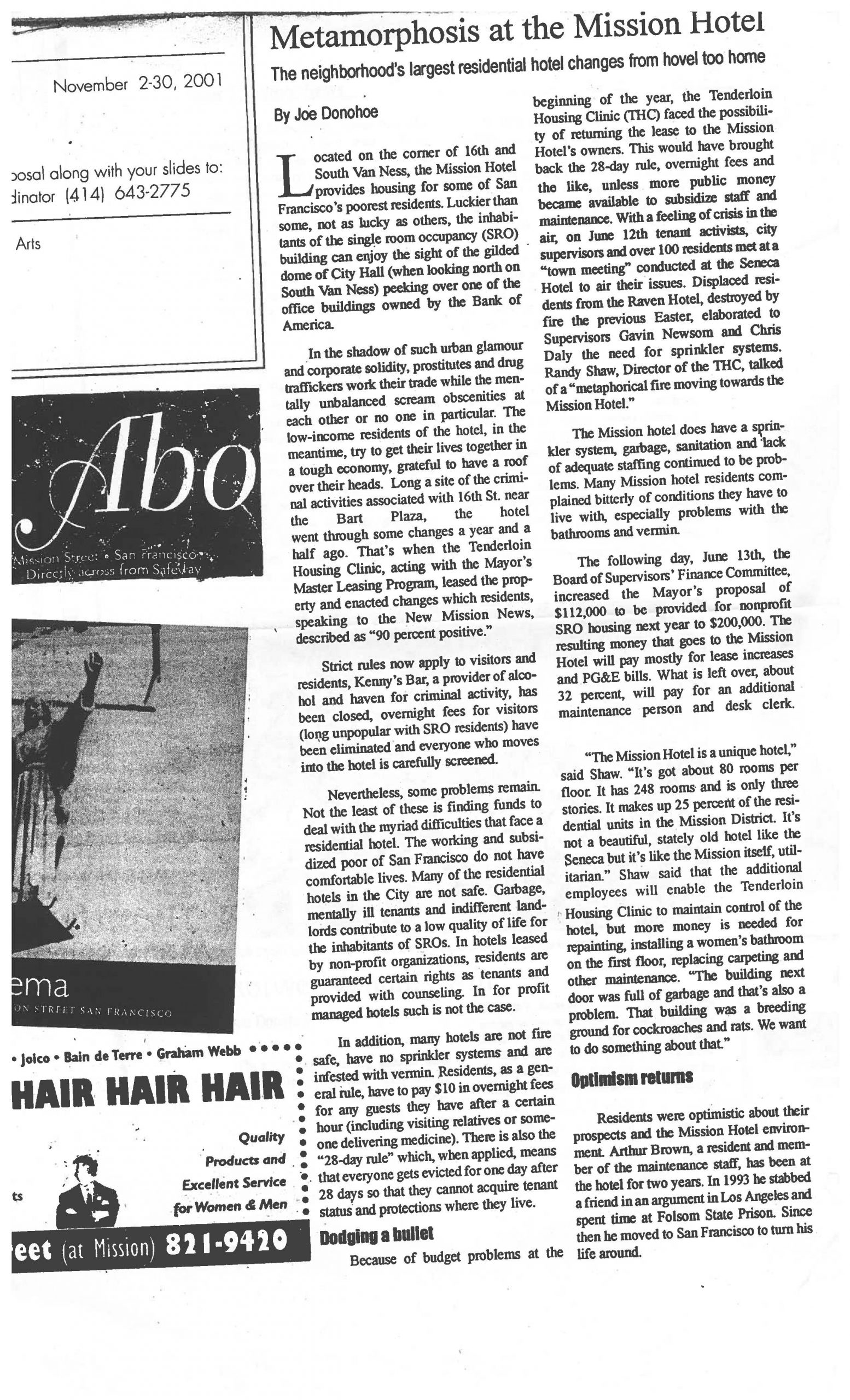 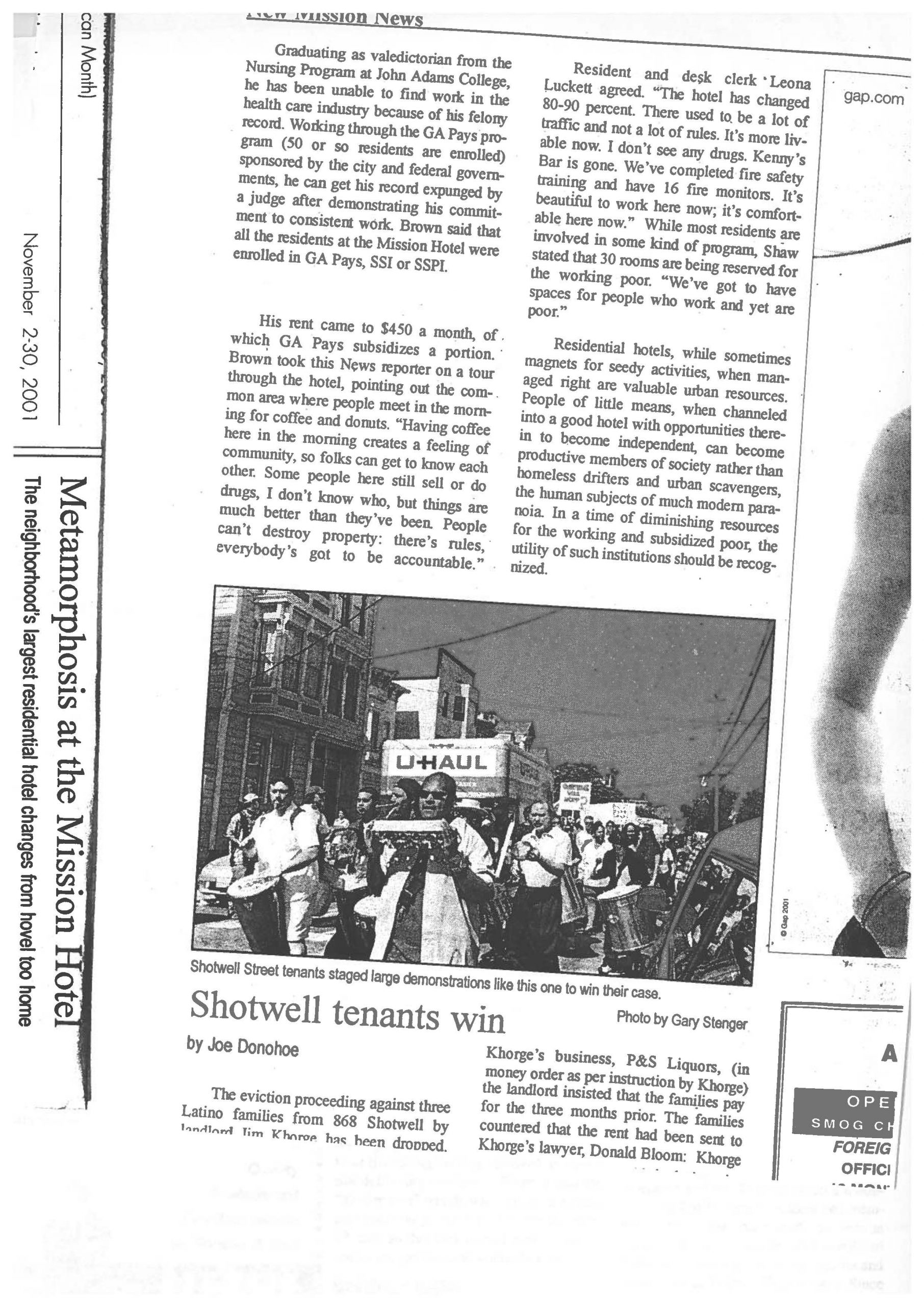 Metamorphosis at the Mission Hotel

The neighborhood’s largest residential hotel changes from hovel too home

Located on the corner of 16th and South Van Ness, the Mission Hotel provides housing for some of San Francisco’s poorest residents. Luckier than some, not as lucky as others, the inhabitants of the single room occupancy (SRO) building can enjoy the sight of the gilded dome of City Hall (when looking north on South Van Ness) peeking over one of the office buildings owned by the Bank of America.

In the shadow of such urban glamor and corporate solidity, prostitutes and drug traffickers work their trade while the mentally unbalanced scream obscenities at each other or no one in particular. The low-income residents of the hotel, in the meantime, try to get their lives together in a tough economy, grateful to have a roof over their heads. Long a site of the criminal activities associated with 16th St. near the Bart Plaza, the hotel went through some changes a year and a half ago. That’s when the Tenderloin Housing Clinic, acting with the Mayor’s Master Leasing Program, leased the property and enacted changes which residents, speaking to the New Mission News, described as “90 percent positive.”

Strict rules now apply to visitors and residents, Kenny’s Bar, a provider of alcohol and haven for criminal activity, has been closed, overnight fees for visitors (long unpopular with SRO residents) have been eliminated and everyone who moves into the hotel is carefully screened.

Nevertheless, some problems remain. Not the least of these is finding funds to deal with the myriad difficulties that face a residential hotel. The working and subsidized poor of San Francisco do not have comfortable lives. Many of the residential hotels in the City are not safe. Garbage, mentally ill tenants and indifferent landlords contribute to a low quality of life for the inhabitants of SROs. In hotels leased by non-profit organizations, residents are guaranteed certain rights as tenants and provided with counseling. In for profit managed hotels such is not the case.

In addition, many hotels are not fire safe, have no sprinkler systems and are infested with vermin. Residents, as a general rule, have to pay $10 in overnight fees for any guests they have after a certain hour (including visiting relatives or someone delivering medicine). There is also the “28-day rule” which, when applied, means that everyone gets evicted for one day after 28 days so that they cannot acquire tenant status and protections where they live.

Because of budget problems at the beginning of the year, the Tenderloin Housing Clinic (THC) faced the possibility of returning the lease to the Mission Hotel’s owners. This would have brought back the 28-day rule, overnight fees and the like, unless more public money became available to subsidize staff and maintenance. With a feeling of crisis in the air, on June 12th tenant activists, city supervisors and over 100 residents met at a “town meeting” conducted at the Seneca Hotel to air their issues. Displaced residents from the Raven Hotel, destroyed by fire the previous Easter, elaborated to Supervisors Gavin Newsom and Chris Daly the need for sprinkler systems. Randy Shaw, Director of the THC, talked of a “metaphorical fire moving towards the Mission Hotel.”

The Mission hotel does have a sprinkler system, garbage, sanitation and lack of adequate staffing continued to be problems. Many Mission hotel residents complained bitterly of conditions they have to live with, especially problems with the bathrooms and vermin.

The following day, June 13th, the Board of Supervisors’ Finance Committee, increased the Mayor’s proposal of $112,000 to be provided for nonprofit SRO housing next year to $200,000. The resulting money that goes to the Mission Hotel will pay mostly for lease increases and PG&E bills. What is left over, about 32 percent, will pay for an additional maintenance person and desk clerk.

“The Mission Hotel is a unique hotel,” said Shaw. “It’s got about 80 rooms per floor. It makes up 25 percent of the residential units in the Mission District. It’s not a beautiful, stately old hotel like the Seneca but it’s like the Mission itself, utilitarian.” Shaw said that the additional employees will enable the Tenderloin Housing Clinic to maintain control of the hotel, but more money is needed for repainting, installing a women’s bathroom on the first floor, replacing carpeting and other maintenance. “The building next door was full of garbage and that’s also a problem. That building was a breeding ground for cockroaches and rats. We want to do something about that.”

Residents were optimistic about their prospects and the Mission Hotel environment. Arthur Brown, a resident and member of the management staff, has been at the hotel for two years. In 1993 he stabbed a friend in an argument in Los Angeles and spent time at Folsom State Prison. Since then he moved to San Francisco to turn his life around.

Graduating as valedictorian from the Nursing Program at John Adams College, he has been unable to find work in the healthcare industry because of his felony record. Working through the GA Pays program (50 or so residents are enrolled) sponsored by the city and federal governments, he can get his record expunged by a judge after demonstrating his commitment to consistent work. Brown said that all the residents at the Mission Hotel were enrolled in GA Pays, SSI or SSPI.

His rent came to $450 a month, of which GA Pays subsidizes a portion. Brown took this News reporter on a tour through the hotel, pointing out the common area where people meet in the morning for coffee and donuts. “Having coffee here in the morning creates a feeling of community, so folks can get to know each other. Some people here still sell or do drugs, I don’t know who, but things are much better than they’ve been. People can’t destroy property: there’s rules, everybody’s got to be accountable.”

Resident and desk clerk Leona Luckett agreed. “The hotel has changed 80-90 percent. There used to be a lot of traffic and not a lot of rules. It’s more livable now. I don’t see any drugs. Kenny’s Bar is gone. We’ve completed fire safety training and have 16 fire monitors. It’s beautiful to work here now, it’s comfortable here now.” While most residents are involved in some kind of program, Shaw stated that 30 rooms are being reserved for the working poor. “We’ve got to have spaces for people who work and yet are poor.”

Residential hotels, while sometimes magnets for seedy activities, when managed right are valuable urban resources. People of little means, when channeled into a good hotel with opportunities therein to become independent, can become productive members of society rather than homeless drifters and urban scavengers, the human subjects of much modem paranoia. In a time of diminishing resources for the working and subsidized poor, the utility of such institutions should be recognized.