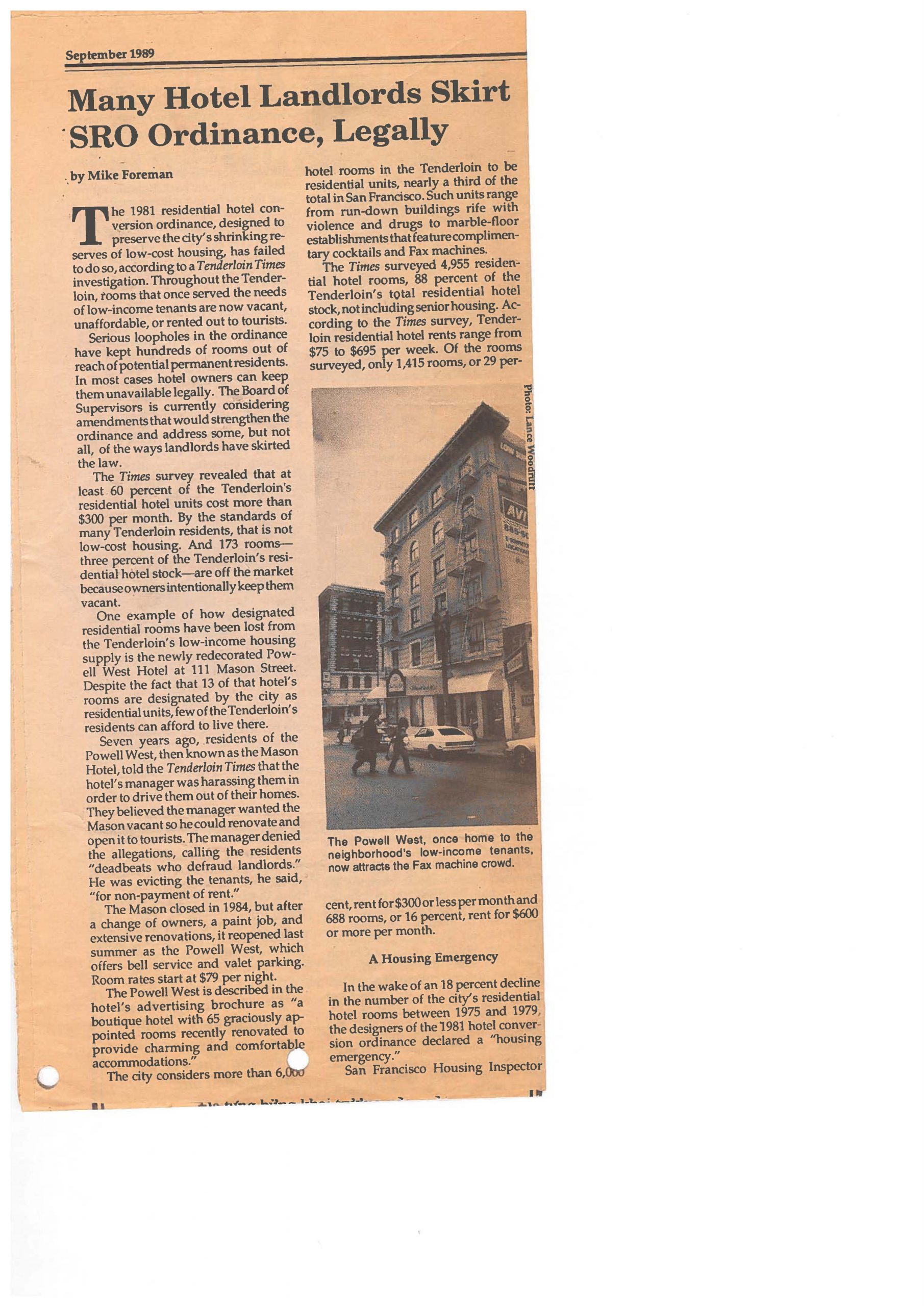 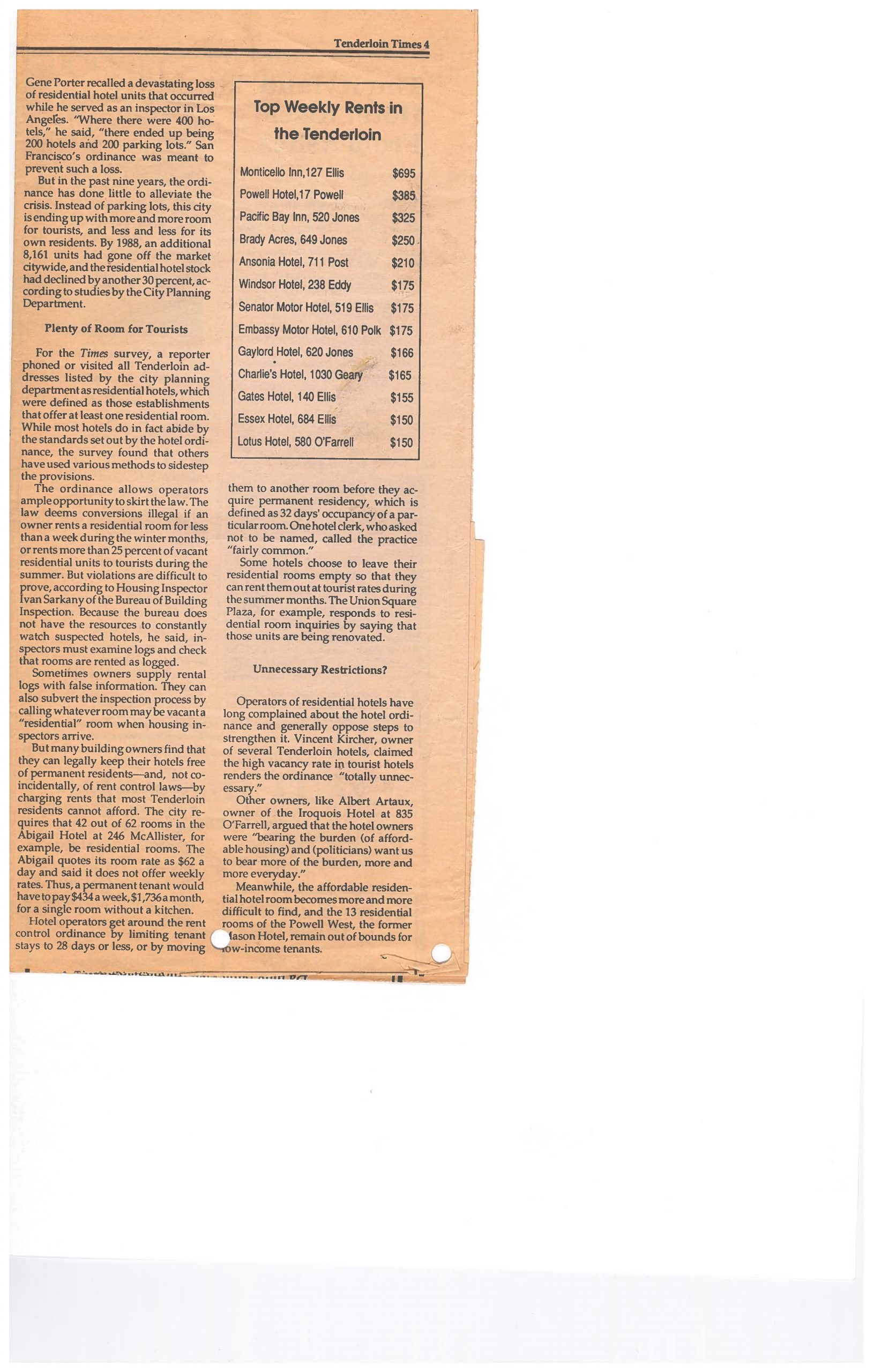 The 1981 residential hotel conversion ordinance, designed to preserve the city’s shrinking reserves of low-cost housing, has failed to do so, according to a Tenderloin Times investigation. Throughout the Tenderloin, rooms that once served the needs of low-income tenants are now vacant, unaffordable, or rented out to tourists.

Serious loopholes in the ordinance have kept hundreds of rooms out of reach of potential permanent residents. In most cases hotel owners can keep them unavailable legally. The Board of Supervisors is currently considering amendments that would strengthen the ordinance and address some, but not all, of the ways landlords have skirted the law.

Seven years ago, residents of the Powell West, then known as the Mason Hotel, told the Tenderloin Times that the hotel’s manager was harassing them in order to drive them out of their homes. They believed the manager wanted the Mason vacant so he could renovate and open it to tourists, The manager denied the allegations, calling the residents “deadbeats who defraud landlords.” He was evicting the tenants, he said, “for non-payment of rent.”

The Mason closed in 1984, but after a change of owners, a paint job, and extensive renovations, it reopened last summer as the powell West, which offers bell service and valet parking. Room rates start at $79 per night.

The Powell West is described in the hotel’s advertising brochure as “a boutique hotel with 65 graciously appointed rooms recently renovated to provide charming and comfortable accommodations.”

The city considers more than 6,000 hotel rooms in the Tenderloin to be residential units, nearly a third of the total in San Francisco. Such units range from run-down buildings rife with violence and drugs to marble-floor establishments that feature complimentary cocktails and Fax machines.

In the wake of an 18 percent decline in the number of the city’s residential hotel rooms between 1975 and 1979 the designers of the 1981 hotel conversion ordinance declared a “housing emergency.”

San Francisco Housing Inspector Gene Porter recalled a devastating loss of residential hotel units that occurred while he served as an inspector in Los Angeles. “Where there were 400 hotels,” he said, “there ended up being 200 hotels and 200 parking lots.” San Francisco’s ordinance was meant to prevent such a loss.

But in the past nine years, the ordinance has done little to alleviate the crisis. Instead of parking lots, this city is ending up with more and more room for tourists, and less and less for its own residents. By 1988, an additional 8,161 units had gone off the market citywide, and the residential hotel stock had declined by another 30 percent, according to studies by the City Planning Department.

Plenty of Room for Tourists

For the Times survey, a reporter phoned or visited all Tenderloin addresses listed by the city planning department as residential hotels, which were defined as those establishments that offer at least one residential room. While most hotels do in fact abide by the standards set out by the hotel ordinance, the survey found that others have used various methods to sidestep the provisions.

The ordinance allows operators ample opportunity to skirt the law. The law deems conversions illegal if an owner rents a residential room for less than a week during the winter months, or rents more than 25 percent of vacant residential units to tourists during the summer. But violations are difficult to prove, according to Housing Inspector Ivan Sarkany of the Bureau of Building Inspection. Because the bureau does not have the resources to constantly watch suspected hotels, he said, inspectors must examine logs and check that rooms are rented as logged.

Sometimes owners supply rental logs with false information. They can also subvert the inspection process by calling whatever room may be vacanta “residential” room when housing in- spectors arrive.

Some hotels choose to leave their residential rooms empty so that they can rent them out at tourist rates during the summer months. The Union Square Plaza, for example, responds to residential room inquiries by saying that those units are being renovated.

But many building owners find that they can legally keep their hotels free of permanent residents-and, not co- incidentally, of rent control laws—by charging rents that most Tenderloin residents cannot afford. The city re- quires that 42 out of 62 rooms in the Abigail Hotel at 246 McAllister, for example, be residential rooms. The Abigail quotes its room rate as $62 a day and said it does not offer weekly rates. Thus, a permanent tenant would have to pay $434 a week, $1,736a month, for a single room without a kitchen.

Hotel operators get around the rent control ordinance by limiting tenant stays to 28 days or less, or by moving them to another room before they acquire permanent residency, which is defined as 32 days’ occupancy of a particular room. One hotel clerk, who asked not to be named, called the practice “fairly common.”

Other owners, like Albert Artaux, owner of the Iroquois Hotel at 835 O’Farrell, argued that the hotel owners were “bearing the burden (of affordable housing) and (politicians) want us to bear more of the burden, more and more everyday.”

Meanwhile, the affordable residential hotel room becomes more and more difficult to find, and the 13 residential rooms of the Powell West, the former fason Hotel, remain out of bounds for tow-income tenants.