Zee Hotel closes, tenants who disregarded the notices to leave are thrown out on the street by police. 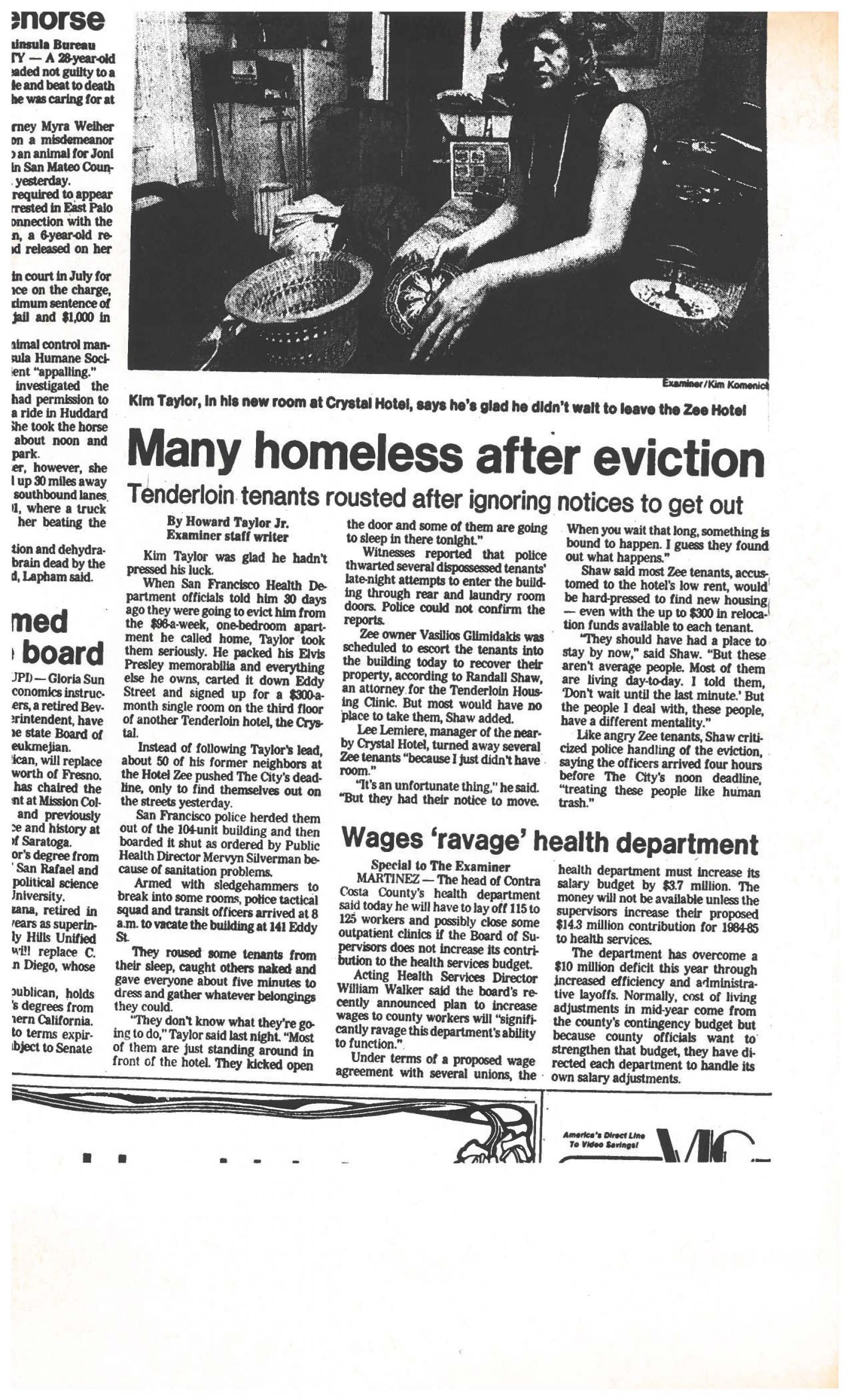 Many Homeless After Eviction

Tenderloin tenants rousted after ignoring notices to get out

Kim Taylor was glad he hadn’t pressed his luck.

When San Francisco Health Department officials told him 30 days ago they were going to evict him from the $98 a-week, one-bedroom apartment he called home, Taylor took them seriously. He packed his Elvis Presley memorabilia and everything else he owns, carted it down Eddy Street and signed up for a $300-a month single room on the third floor of another Tenderloin hotel, the Crystal.

Instead of following Taylor’s lead, about 50 of his former neighbors at the Hotel Zee pushed The City’s deadline, only to find themselves out on the streets yesterday.

San Francisco police herded them out of the 104-unit building and then boarded it shut as ordered by Public Health Director Mervyn Silverman because of sanitation problems.

Armed with sledgehammers to break into some rooms, police tactical squad and transit officers arrived at 8 a.m. to vacate the building at 141 Eddy St.

They roused some tenants from their sleep, caught others naked and gave everyone about five minutes to dress and gather whatever belongings they could.

“They don’t know what they’re going to do.” Taylor said last night. “Most of them are just standing around in front of the hotel. They kicked open the door and some of them are going to sleep in there tonight.”

Witnesses reported that police thwarted several dispossessed tenants late-night attempts to enter the building through rear and laundry room doors. Police could not confirm the reports.

Zee owner Vasilios Glimidakis was scheduled to escort the tenants into the building today to recover their property, according to Randall Shaw, an attorney for the Tenderloin Housing Clinic. But most would have no place to take them, Shaw added.

Lee Lemiere, manager of the nearby Crystal Hotel, turned away several Zee tenants “because I just didn’t have room.”

“It’s an unfortunate thing,” he said. “But they had their notice to move.”

When you wait that long, something is bound to happen. I guess they found out what happens.”

Shaw said most Zee tenants, accustomed to the hotel’s low rent, would be hard-pressed to find new housing even with the up to $300 in relocation funds available to each tenant.

“They should have had a place to stay by now,” said Shaw. “But these aren’t average people. Most of them are living day-to-day, I told them, Don’t wait until the last minute. ” But the people I deal with, these people, have a different mentality.”