Momentum stalls in 1995 for the Mandatory Direct Payment Program supported by SF voters through Prop N. 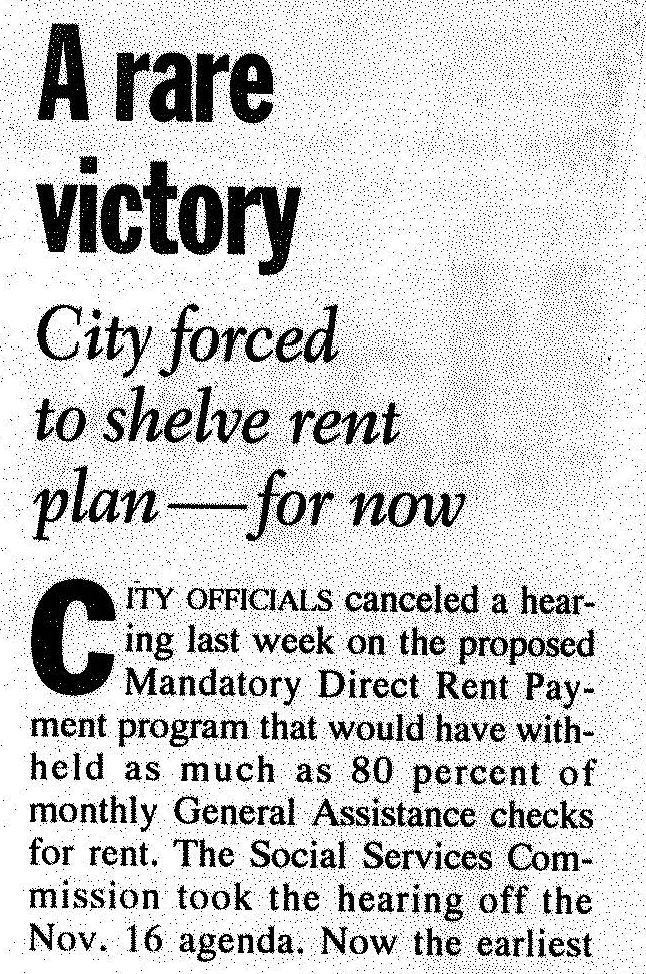 City officials canceled a hearing last week on the proposed Mandatory Direct Rent Payment program that would have withheld as much as 80 percent of monthly General Assistance checks for rent. The Social Services Commission took the hearing off the Nov. 16 agenda. Now the earliest the program can be considered is January.

The postponement offered hope to critics that the rent program won’t be enacted at all. “My sense is that the Social Service Commission was finally open to hearing about the legal problems with the mandatory rent program and about how flawed it was,” Steve Williams of the Coalition on Homelessness told the Bay Guardian. “It made no sense to implement it now, especially in a political climate where Willie Brown has said repeatedly that [if elected mayor] he would not implement it.”

The Mandatory Direct Rent Payment program was approved by San Francisco votes as Prop. N last year. It requires homeless G.A. recipients to take rooms in residential hotels, with the city’s Department of Social Services paying up to 80 percent of monthly $345 G.A. checks directly to residential hotel landlords. The program would cost the city $1 million in administrative costs every year. Most of which would go to Catholic Charities, a nonprofit organization that was contracted to administer the program.

The program has been widely criticized by G.A. recipients and their advocates because it could force homeless individuals to either live in city-mandated but squalid residential hotels or lose their G.A. support entirely. Critics hope the postponement means the program will never be enacted. But DSS officials tell the Bay Guardian that mandatory direct rent is still on track, even though the Social Services Commission requested more time to consider it.

In May the Board of Supervisors supported a resolution to urge the city not to implement mandatory direct rent until enough acceptable housing units were available for all G.A. recipients who are homeless. In October the law firm of McCutehen, Doyle, Brown & Enersen. Along with the Lawyers Committee for Civil Rights and the San Francisco Neighborhood Legal Assistance Foundation, filed a suit against the city, saying the program was unconstitutional. Early last week the City Attorney’s Office told the plaintiffs that the hearing would be shelved at least until January.

“They called and said they were taking it off the calendar for many reasons,” said Marcia Rosen, deputy director of the Lawyer’s Committee for Civil Rights. “We made good arguments against the program. We did go to court and showed that we were prepared to litigate. They were forced to look closely at the issues people in the community had been pointing out since the beginning.”

During the mayoral race several candidates voiced strong criticism of the proposed program. Mayoral hopeful Willie Brown sent out a mailer to more than 100,000 voters pledging to terminate the program immediately if he is elected.

Critics of mandatory direct rent have suggested that Jordan’s poor showing in recent polls may have influenced the rescheduling of the hearing, though DSS director Brian Cahill told the Bay Guardian that Jordan’s low polling numbers were not the reason the meeting date was changed. He added, however, that implementation could be affected if Brown wins the Dec. 12 runoff.

“We got this big package on Monday from the [plaintiffs’] attorneys, and we decided to put the hearing off until January, but we’re still on the same track,” Cahill said. “Were there to be a new mayor, his decision would be a factor here. That’s his prerogative, and we would respect that prerogative. On the other hand, I think [the program] is good public policy, and I hope I get a chance to explain that position.”

Randy Shaw, executive director of the Tenderloin Housing Clinic, told the Bay Guardian he thinks this might be the end of Prop. N. “It was a bad idea whose time is gone,” he said. “The concept drew support, but the reality was a problem. I don’t see this program happening now.”