197 residential hotel units are in zoned to be to tourist rooms, THC claims the residents were all told that after renovations they would be able to return. 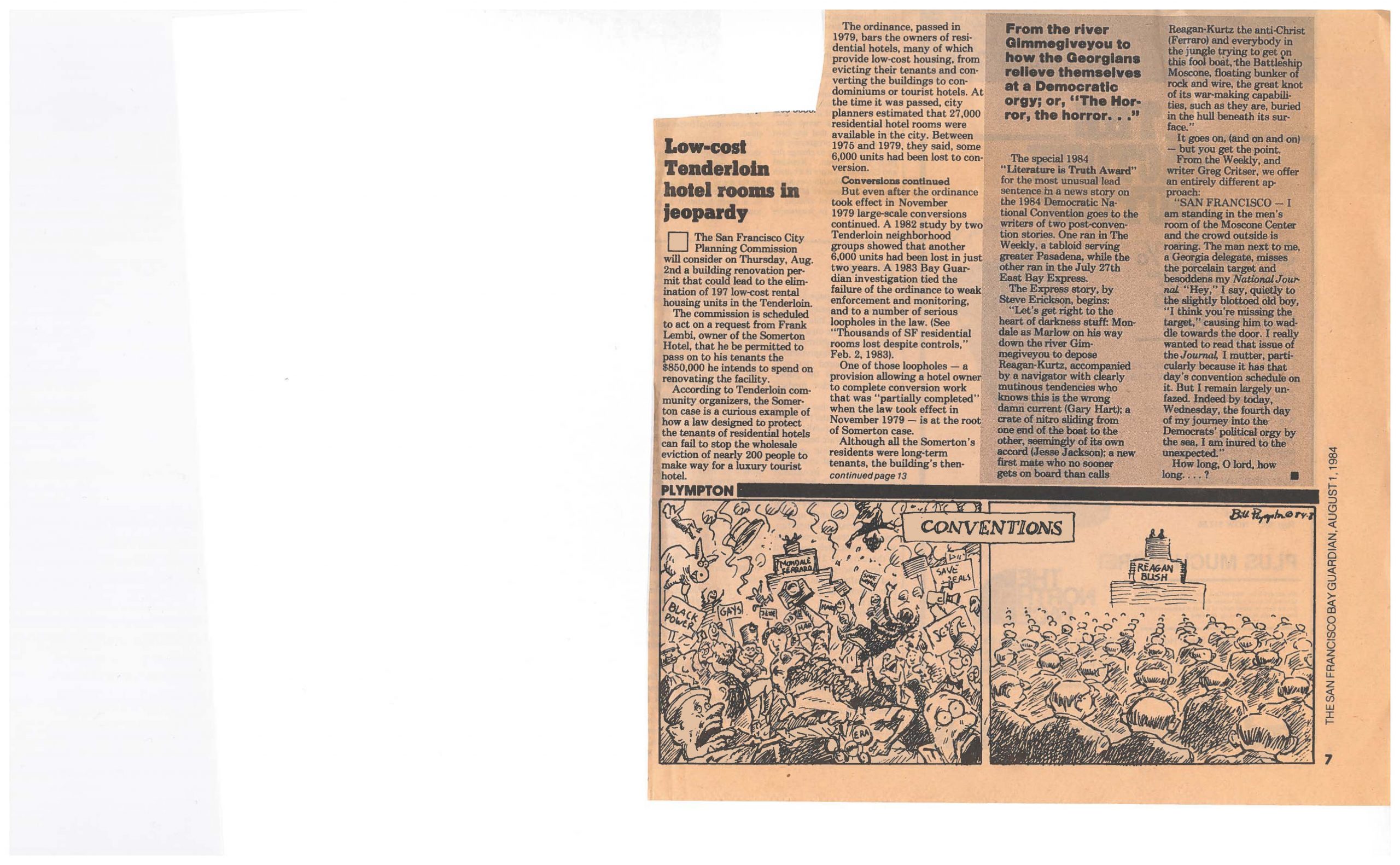 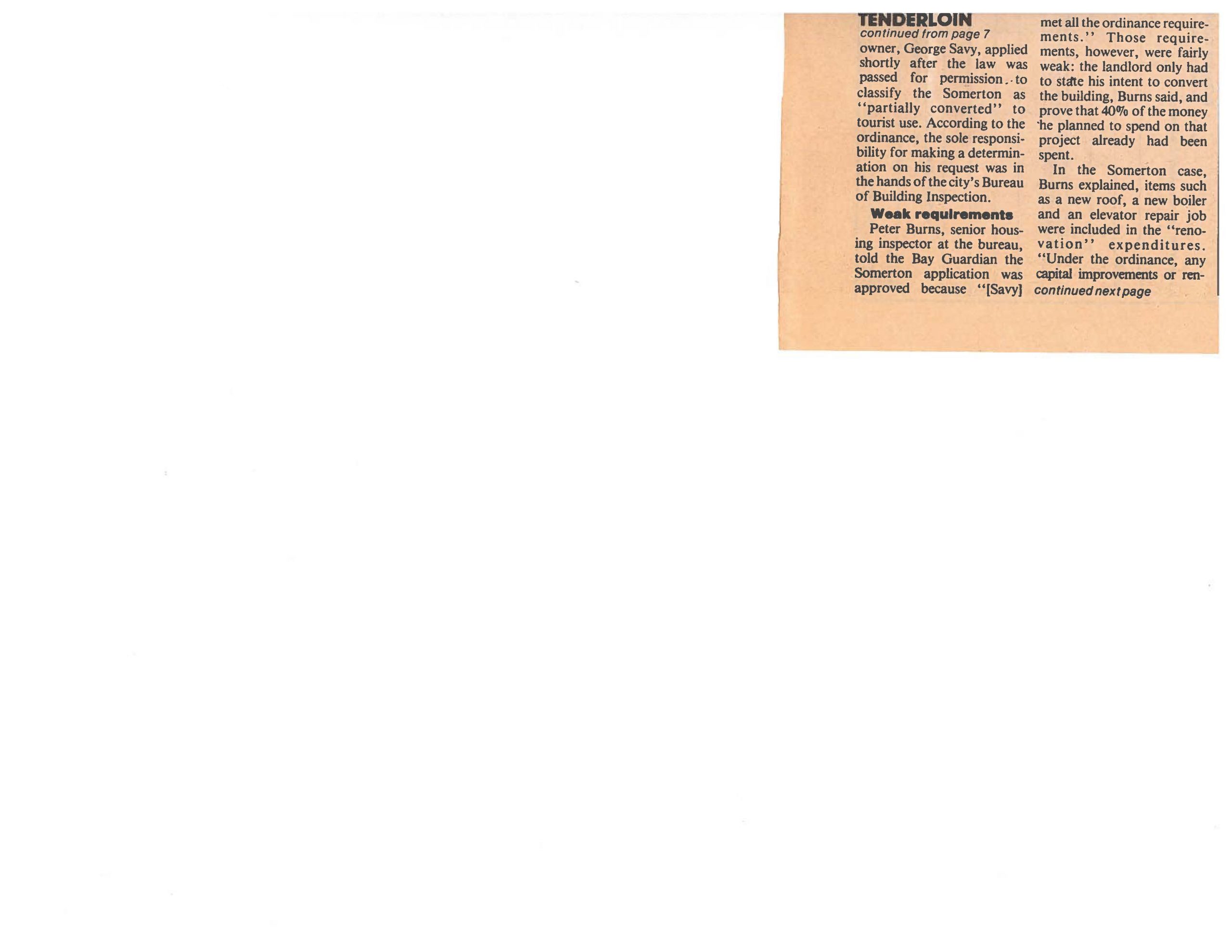 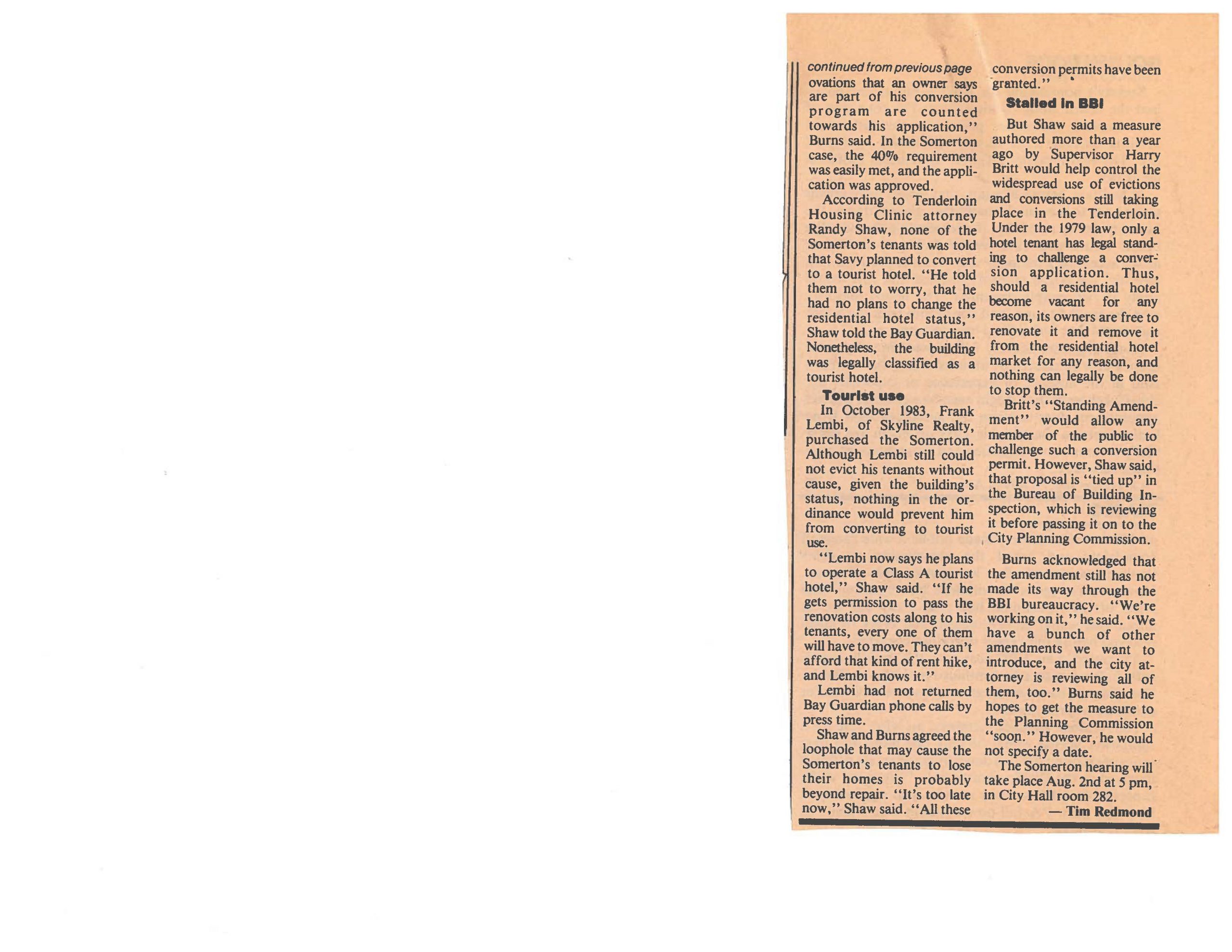 The San Francisco City Planning Commission will consider on Thursday, Aug. 2nd a building renovation permit that could lead to the elimination of 197 low-cost rental housing units in the Tenderloin.

The commission is scheduled to act on a request from Frank Lembi, owner of the Somerton Hotel, that he be permitted to pass on to his tenants the $850,000 he intends to spend on renovating the facility.

According to Tenderloin community organizers, the Somerton case is a curious example of how a law designed to protect the tenants of residential hotels can fail to stop the wholesale eviction of nearly 200 people to make way for a luxury tourist hotel.

The ordinance, passed in 1979, bars the owners of residential hotels, many of which provide low-cost housing, from evicting their tenants and converting the buildings to condominiums or tourist hotels. At the time it was passed, city planners estimated that 27.000 residential hotel rooms were available in the city. Between 1975 and 1979, they said, some 6,000 units had been lost to conversion.

But even after the ordinance took effect in November 1979 large-scale conversions continued. A 1982 study by two Tenderloin neighborhood groups showed that another 6,000 units had been lost in just two years. A 1983 Bay Guardian investigation tied the failure of the ordinance to weak enforcement and monitoring, and to a number of serious loopholes in the law. (See “Thousands of SF residential rooms lost despite controls,” Feb. 2, 1983).

One of those loopholes – a provision allowing a hotel owner to complete conversion work that was ‘partially completed” when the law took effect in November 1979 – is at the root of Somerton case.

Although all the Somerton’s residents were long-term tenants, the building’s then Ovations that an owner says are part of his conversion program are counted towards his application,” Burns said. In the Somerton case, the 40% requirement was easily met, and the application was approved.

According to Tenderloin Housing Clinic attorney Randy Shaw, none of the Somerton’s tenants were told that Savy planned to convert to a tourist hotel. “He told them not to worry, that he had no plans to change the residential hotel status,” Shaw told the Bay Guardian. Nonetheless, the building was legally classified as a tourist hotel.

In October 1983, Frank Lembi, of Skyline Realty, purchased the Somerton. Although Lembi still could not evict his tenants without cause, given the building’s status, nothing in the ordinance would prevent him from converting to tourist use.

“Lembi now says he plans to operate a Class A tourist hotel,” Shaw said. “If he gets permission to pass the renovation costs along to his tenants, every one of them will have to move. They can’t afford that kind of rent hike, and Lembi knows it.”

Shaw and Burns agreed the loophole that may cause the Somerton’s tenants to lose their homes is probably beyond repair. “It’s too late now,” Shaw said. “All these conversion permits have been granted.”

But Shaw said a measure authored more than a year ago by supervisor Harry Britt would help control the widespread use of evictions and conversions still taking place in the Tenderloin. Under the 1979 law, only a hotel tenant has legal standing to challenge a conversion application. Thus, should a residential hotel become vacant for any reason, its owners are free to renovate it and remove it from the residential hotel market for any reason, and nothing can legally be done to stop them.

Britt’s “Standing Amendment” would allow any member of the public to challenge such a conversion permit. However, Shaw said, that proposal is “tied up” in the Bureau of Building Inspection, which is reviewing it before passing it on to the City Planning Commission.

Burns acknowledged that the amendment still has not made its way through the BBI bureaucracy. “We’re working on it,” he said. “We have a bunch of other amendments we want to introduce, and the city attorney is reviewing all of them, too.” Burns said he hopes to get the measure to the Planning Commission “soon.” However, he would not specify a date.